Commissioners Talk a Living Wage and Other Budget Requests 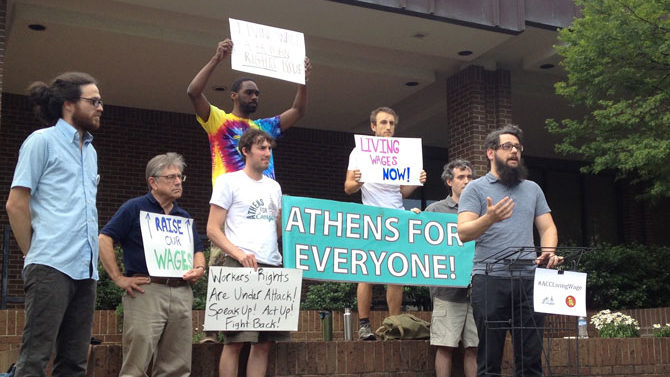 ACC government should set an example by paying all employees a living wage, Athens for Everyone activists insisted at a budget hearing last week—but some part-time and seasonal employees make less than the $10.17 an hour needed to support a single adult in Clarke County, per county-by-county living costs developed at MIT.

Raising those wages would cost the county only $65,000 a year, but raising only those wages would “monkey with the pay and classification system,” county Manager Blaine Williams told commissioners. A pool lifeguard, for example, might then earn the same wage as the head lifeguard, who would then need a raise as well, and then other raises would also be necessary up the pay scale, potentially costing the county “millions of dollars” yearly.

“You’ve got to maintain [pay] separation between people with higher skills, knowledge and abilities,” Mayor Nancy Denson argued. But devising a comprehensive new pay scale for all employees is not easy, Williams said; such a study could cost $300,000. No such study has been done since 1993, so commissioners decided to add it to the budget. (Next year’s budget proposal already includes a 2 percent pay raise for all employees, costing $1.8 million; comparable pay raises have been budgeted in all but the tightest budget years, based on amounts paid by other governments.)

Not all commissioners embraced the pay study. Athens-Clarke’s pay is already pretty competitive with market rates, Commissioner Kelly Girtz said; it’s the lowest rates that need to go up. Commissioner Melissa Link pointed out that across-the-board raises benefit higher-earning employees more than lower earners, and singled out the “bloated administration” at the Leisure Services Department. “We’ve got employees in Leisure Services making a lot of money…. In the meantime, we’re not paying people on the ground a living wage.”

The 2017 budget (covering the fiscal year that begins in July 2016) will be up for approval June 7. Despite dire newspaper ads required by state legislators, the tax rate will not go up, but because assessed property values have gone up an average 3.5 percent, some tax bills will increase accordingly. Recycling revenues are down with volatile materials markets—recycling costs money rather than generates revenue at present—while employee health insurance is up again.

New initiatives will include an online plans review process, a downtown public health study to examine nightlife issues including binge drinking, sidewalk impediments and crowding in bars and music venues, an “open studio” program at Lyndon House Art Center and a plan to transfer prison inmates back to the Clarke County Jail before their sentences are up, allowing them to attend diversion programs here before they are released. Otherwise prisoners are released “really with no resources at all,” Finance Director Chris Caldwell told commissioners. “We’re seeing a lot of re-entry challenges.”

And repaving of ACC’s 600 miles of roads is falling behind, despite $800,000 budgeted for next year. Future SPLOST money could help catch up, Caldwell said.

To develop each year’s budget, every county department proposes two budgets: one 2 percent less than its current budget (“We always want departments to think about what’s not necessary,” Manager Williams said), and one that’s 1 percent more. Departments can make other requests, but they are not routinely granted. Various departments this year asked for 34 new full-time employees, but only six are being added. Once the mayor and manager agree on the proposed budget, there are public hearings, and commissioners tweak it before the final vote.

“I kind of consider it preventative medicine,” said Link. “We spend the lion’s share of our budget on cops and courts, basically. If we can take care of these kids on the front end, maybe they won’t end up in that system.”