Contention and Confusion on the ACC Commission 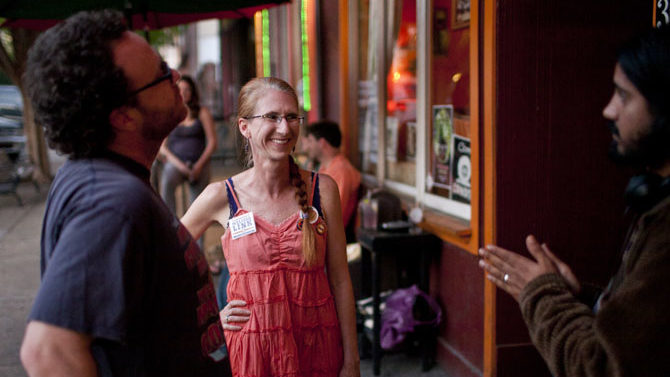 When Melissa Link was running for commission in 2014, the argument was whether she was a committed and informed activist who could shake things up behind the rail or a hothead who would render herself totally ineffective by alienating her colleagues. Both Good Melissa and Bad Melissa were on display May 3, when the commission voted on plans to add bike lanes and crosswalks to parts of Chase Street.

Credit her for putting in the hard work to come up with something that could satisfy alternative transportation advocates, Chase Street Elementary parents and Chase residents who were uncomfortable with losing their center turn lane. She got it done—in spite of herself.

Commissioner Mike Hamby, for example, laid into her a couple of times during the Chase Street debate. “I voted for your proposal, and I expect I’ll vote for the contingency funding,” Hamby said after Link blamed the Transportation and Public Works Department’s failure to incorporate public input for the last-minute nature of her proposal. “But please, don’t keep throwing staff under the bus in situations like this.”

Here’s an Option: The Chase Street situation further illustrates the commission’s dysfunction. Commissioners are constantly putting off decisions and sending them back for further study (see: the May 3 vote against closing part of Newton Street and pretty much the entire downtown master plan). They’ve known Chase Street needed repaving for a year, and yet still the community is left with a last-minute plan that was never vetted by the public and barely vetted behind the rail, passed in a slipshod manner that left even the county attorney, who is paid to understand parliamentary procedure, scratching his head.

After a bewildering series of motions on Chase Street, it turned out that Link had not included a funding source to cover the $34,000 in improvements she proposed. Her intention was to use $40,000 earmarked to move a crosswalk on Prince Avenue and add an overhead flashing beacon, which the developer of 100 Prince (more on that later) has offered to pay for. But that never made it into any motion.

Commissioners asked Attorney Bill Berryman what they should do. “I’m gonna be honest with you, this is the first time anything like this has happened,” he said. Manager Blaine Williams stepped in and said he’d bring forward a budget amendment next month.

Constantly legislating on the fly is no way to govern, and commissioners know it. “This is what happens when things get done at the last minute, without any transparency,” Commissioner Andy Herod said.

Reservoir Dogs: Environmental groups have been pressuring commissioners to remove $20 million to study and potentially buy land for a new reservoir from a $240 million, 20-year water and sewer plan the commission approved May 3. Reservoirs are an inefficient water source due to evaporation, they irrevocably change ecosystems and, as Oconee County found out the hard way with Hard Labor Creek, costs can quickly spiral into the hundreds of millions of dollars. On the other hand, Public Utilities officials want to make sure the community doesn’t find itself in the same situation we did in the 2008 drought, when we were just a few weeks away from running out of water completely.

On the reservoir vote there were not one but two competing commission-defined options. (That’s the term for alternatives to staff recommendations introduced by commissioners.)

Link proposed substituting a $2 million expenditure for “enhanced” water conservation measures, drawing another rebuke from Hamby, who pointed out that in spite of population growth the city is consuming only 12 million gallons of water per day, compared to 20 million before the drought. “In our water department, the word ‘conserve’ is ingrained in everybody’s minds and everybody’s actions,” he said. Then he called the question, which is the legislative equivalent of dropping the mic.

The commission voted 9-1 (with Link the lone holdout) to approve Commissioner Kelly Girtz’s more general language on water supply, removing the reference to land acquisition. That could involve something like—just throwing out ideas—dredging Lake Chapman, he said. Whatever happens, it’ll be years and many more commission votes down the road. [BA]

ARMC: In addition, the commission unanimously approved a deal for Atlanta-based Piedmont Healthcare to take over Athens Regional in exchange for $575 million in debt repayments and capital improvements, in spite of concerns about losing local control (though Athens will continue to be represented on the ARMC board and will gain seats on the Piedmont board as well). Hospitals all over are consolidating, and “I think the bigger danger over time is losing the hospital if something like this doesn’t occur,” Commissioner Jerry NeSmith said.

100 Prince: The commission also sent the mixed-use development proposed for the St. Joseph Catholic Church site back to the planning commission at the developer’s request.

“Homes Urban remains committed to the basic concept of the plan,” but three issues recently came up that require the Greenville, SC-based developer to reconfigure it, Athens lawyer Jim Warnes told the commission.

Homes Urban has not been able to line up a commercial tenant for the building fronting Prince Avenue, Warnes told Flagpole in an interview. (Which means, apparently, that Daily Groceries won’t be moving into the space after all.) In addition, construction bids came in “significantly higher” than expected, Warnes said, and the developer is facing timing issues related to tax credits for development in low-income areas.

Once the plans are revised, Warnes said Homes Urban will hold another round of meetings with neighbors, then resubmit the plans to the planning department, a process he said could take about four or five months.

The commission also approved plans to tear down the Barnett Shoals Kroger (as well as the old Kmart) and replace it with a gargantuan Walmart-style store like the one on Highway 72. The new shopping center will be oriented toward College Station Road and include a couple of out-parcels for restaurants.

Commissioner Andy Herod, who represents the Eastside, said Kroger is open to his idea for a mural on the new store’s long, blank wall. One Kroger in Atlanta also incorporated public art, he said. “People like shopping in places that have a sense of place to them,” he said. Fellow Eastside commissioner Sharyn Dickerson added that the trees in the plan are “awesome.”

A Kroger fuel center near the library—including a convenience store and some outdoor seating, adding to Baxter Street’s vibrancy—also approved unanimously. Stores with fuel centers tend to do better, and Alps customers don’t want to drive out to Epps Bridge to use their fuel points, Kroger representative Ron Hawkins said.

The commission also voted 9-1 to approve a massive subdivision and apartment complex off Atlanta Highway, previously known as Winslow Park (but minus a proposed hotel and commercial space), when it was first approved in 2004. Approval came in spite of concerns raised by Commissioner Jared Bailey about developer Walton, Georgia LLC’s business model: The company syndicates its developments, buying up land in growing areas, then selling shares to overseas investors and flipping the property to another developer who actually builds the project. Tracts often sit vacant for years.Commissioner Jerry NeSmith, who has been fighting to keep suburban-style development on Atlanta Highway, defended the plans, saying that they will help revitalize the corridor, and they’re specific and binding enough to rule out a bait-and-switch.