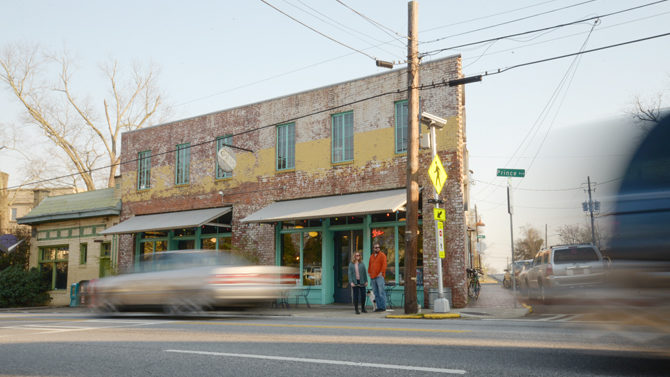 Public hearings will go forward on closing the short block of Newton Street next to the Grit, although commissioners were distinctly unenthusiastic about such a closing at Tuesday’s work session. “I don’t think we should close any of our streets,” said Commissioner Jared Bailey. Nearby businesses have been lukewarm at best about the plan (intended to create sidewalk cafe space between the Taziki’s and the Grit), fearing it will complicate access to parking for customers.

Also proposed: minor changes to Chase Street, which ACC Transportation Director David Clark said “actually operates pretty well” at present. An additional pedestrian refuge island could be added near Chase Street Elementary School to the three already in place at the Medical Center; and “sharrow” bike markings could be added, plus several blocks of bicycle lanes (reducing auto lanes from five to three) from Nantahala out to Newton Bridge Road. A portion of the new bike lanes could be protected lanes, Clark said, separated from car traffic by either a low curb or flexible vertical stanchions. But maintenance of separated bike lanes is a problem, he added. They collect debris, and “we don’t have a six-foot sweeper.”

Rather than the usual “drop-in” public hearings, Commissioner Melissa Link wondered if the hearings could return to the “more beneficial” meeting-like format so all participants can hear questions raised by others. That format was changed, Clark said, because in the open meetings some citizens felt outnumbered by others with different views—“kind of fearing the wrath of 80 other people.” What some governments do, he added, is a combination of both in the same meeting; his department might try such a hybrid format, Clark said.

Asked to prioritize future projects for the Planning Department, corridor studies or followups for the Lexington Road, Atlanta Highway and Prince Avenue corridors got top preference, along with revising commercial design standards. But some commissioners wanted to see more action, not more studies. “I fear they’ll have the same fate as the Oak Street and Prince Avenue corridor studies,” which have been gathering dust, interjected Commissioner Jerry NeSmith. “I just don’t want us to study it to death.”

Responding to NeSmith, Planning Director Brad Griffin had a suggestion. In the existing Oak/Oconee and Prince Avenue corridor studies, “at the end of those two documents there were 10 pages worth of small-type recommendations of next steps to implementation strategies.” Publicize those recommendations and hold public hearings on them, “and let the community for two or three weeks weed through it. Let them give us their top five list, or their top 10 list… and then start trying to tackle the real big issue of how to pay for it. But that’s so much of why so many of these studies are completed, and they sit on the shelf— because the next step takes money.”

But some corridor changes won’t need expensive infrastructure, just zoning changes, several commissioners said; other changes won’t come cheap, said Commissioner Kelly Girtz, but infrastructure proposals based on already-completed corridor studies (like better pedestrian infrastructure or a multi-use trail paralleling U.S. 78) could translate into “a package that we can put in front of the voters” in a future T-SPLOST (transportation sales tax) referendum tentatively planned for 2017.