Hunker Down—UGA Students Are Back 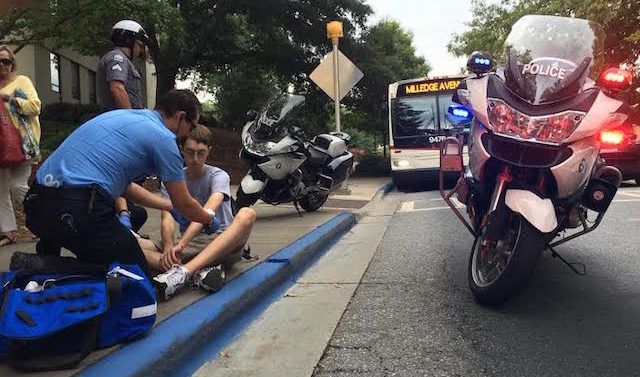 By the time you read this, the pandemonium that is the start of UGA’s fall semester will be in full swing. Move-in day on campus is Tuesday, Aug. 11 and students have already been moving into off-campus rentals for more than a week. A U-Haul is probably blocking your driveway as we speak, you’ve probably had at least one near-head-on collision with a parent going the wrong way down a one-way street, and somebody is about to get run over on campus if no one has already. Between suburban freshmen who’ve never seen a crosswalk before and the sheer number of people wandering around trying to figure out where they’re going, the start of classes each fall is the most deadly time of year for pedestrians.

Last year, a car driven by a distracted driver who had bent down to pick up something hit a student crossing Lumpkin Street on the very first day of class. (Miraculously, the student was not seriously injured and even went to judo class the next day.) Two days later, another student was hit by a truck on Baldwin Street. His view was blocked by stopped buses. He was lucky not to be hurt badly, too.

Statistically speaking, Lumpkin Street is the most dangerous in the city for pedestrians and bicyclists, with 26 reported collisions over the past five years. More than 1,000 people cross it every day on foot. Athens-Clarke County officials are planning safety improvements on Lumpkin and other busy local streets, but in the meantime, let this serve as a warning to be careful out there. Look both ways and hold hands while you’re crossing the street.