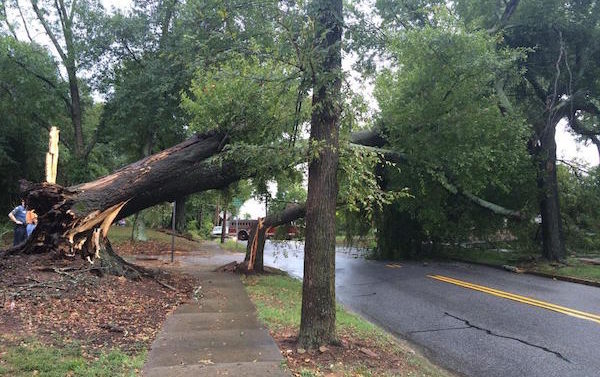 Storm damage on College Avenue between Willow and Dougherty streets.

UPDATE: At 6:38 p.m. the National Weather Service issued another advisory for a line of storms headed towards Clarke and Oconee counties. Expect frequent lightning and pea-sized hail. The advisory expires at 11:30 p.m.

More than two inches of rain fell on parts of Athens in less than an hour and winds gusted at 60 miles per hour earlier this afternoon, knocking over trees and knocking out power, mainly in the western half of the city.

Georgia Power reported 45 outages in Athens affected 2,423 customers. Outages were spread throughout downtown, East Athens, Prince Avenue, the mall area, Rocksprings, the Hancock Corridor and Five Points. More than 1,500 of those customers are downtown and in Newtown, Pulaski Heights and Boulevard east of Chase Street.

Downtown, the roof of the building that houses the dress boutique Cheeky Peach  at 160 W. Clayton St. collapsed. Trees fell on several houses and apartment buildings. (See below for photos of the damage.)

Several traffic lights—including those at Alps Road and Baxter Street, and Prince Avenue and Chase Street—are out, according to Athens-Clarke County. If you see any signals that aren’t working, treat them as four-way stops.

Also be on the lookout for downed power lines, which have been reported on Whitehall Road near Milledge Avenue.

No injuries have been reported.

2.15 inches of rain in 38 minutes at UGA. pic.twitter.com/pwlRCFhj3P

Athens Power Rankings for the Week of Aug. 10

Hunker Down—UGA Students Are Back