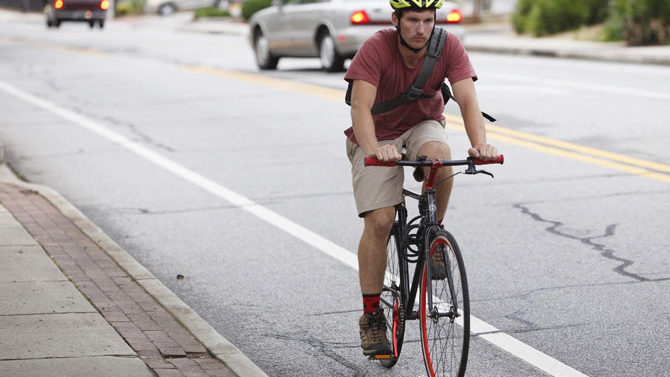 Over 50 people attended a public hearing last week (and public comments will still be accepted by email) on proposals to three-lane parts of two four-lane streets: several blocks of Chase Street (from just inside the Bypass out to Newton Bridge Road, adding bike lanes) and about a half-mile of Riverbend Parkway (adding bicycle lanes and a painted median to the dead-end residential street off Riverbend Road).

County policy requires re-evaluation of four-lane streets for possible three-laning whenever such streets are due for repaving. Although not proposed for lane reduction, turn lanes would be changed in the block of Hancock Avenue behind the courthouse to better accommodate traffic entering the parking garage.

Some neighborhood activists are underwhelmed by the proposals. In a letter posted on the In the Loop blog at flagpole.com, BikeAthens Executive Director Tyler Dewey, Tony Eubanks, Clint McCrory and Jennifer Rice criticized “the lack of a coherent approach to implementing ACC’s Complete Streets policy.” Since only four-lane streets and new construction are routinely evaluated for adding bike lanes, “the majority of ACC streets are almost automatically eliminated from any consideration of bike lanes or safer pedestrian pathways,” they wrote.

ACC Commissioner Melissa Link wasn’t enthralled, either. The Chase Street proposal “essentially connect[s] the giant milk carton to the Loop to make for a thoroughly useless stretch of bike lanes,” and should instead add bike lanes all the way in to Boulevard, she wrote in an email. She also advocates additional crosswalks at Oneta Street, Nantahala and Chase Street Elementary, and says “there is much support” for a “complete Chase Street.”

Many citizens filled out comment forms at last week’s hearing, and comments will be taken by email to david.clark@athensclarkecounty.com until Aug. 1. County transportation director David Clark told Flagpole that Prince Avenue’s intown section will come up for repaving (and therefore be evaluated for three-laning) in “three to five years.” Clark said his department is waiting until the bike lanes along College Station Road are finished (likely within a year) before proposing or evaluating other bicycle projects, but said such projects have already been “ordered by priority within the corridors” based on origin-and-destination surveys of bicyclists. Clark said possible future projects include Lumpkin (south of Five Points), Oglethorpe Avenue (from Prince out to the Loop), Hawthorne Avenue, North Avenue, Hancock from Pulaski west to Broad and Lexington Road.

Previous lane reductions from four to three lanes (Pulaski Street, Cedar Shoals Drive, Whit Davis Road) are “operating very well” with added bicycle lanes and fewer car crashes, ACC traffic engineer Steve Decker told Flagpole. Local usage statistics on bicycles are hard to come by, because they are hard to count, he said, but the county’s ability to count them is improving. Meanwhile, drivers are giving more respect to pedestrians in all of the county’s mid-block crosswalks.

“Everywhere we have them, we’re getting more compliance,” Decker said.

When overhead flashers are installed, Decker expects even better compliance. At the Grit crosswalk on Prince, about 10 percent of people who cross use the carry-across flags—and some apparently carry them home. So far, he said, “we’ve lost 140.”