The Downtown Athens Master Plan Is Finally Getting a Look 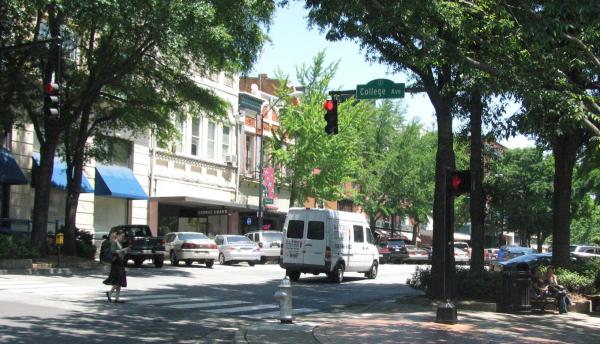 Six ACC commissioners appointed by Mayor Nancy Denson met for less than an hour last week to consider how to implement the Downtown Master Plan developed in 2013 by UGA planning and design students and staff. “Professor [Jack] Crowley’s plan is for 2030, so we don’t necessarily feel like we have to get everything done tonight,” committee chairman Mike Hamby told the group. The first meeting was mostly organizational; the group will meet again Mar. 5. Crowley, who headed up the design teams, and Denson also attended the meeting.

“This is not my plan,” said Crowley. “This is a plan that resulted from talking to 5,000 people over two years.” Available at downtownathensmasterplan.wordpress.com, the plan offers area-by-area (and often lot-by-lot) suggestions for redeveloping many downtown spaces (both private and public), adding landscaping, midblock pedestrian/commercial alleyways, narrower lanes and wider sidewalks, replacing some stoplights with four-way stops, adding a downtown circulator bus, adding passenger rail along existing tracks from downtown through campus (and eventually in other directions), building an outdoor amphitheater adjacent to the multimodal bus station and “daylighting” buried portions of Tanyard Creek, among other things.

“Certainly, all of this is going to take money,” Hamby said. Denson suggested that, to protect right-of-ways needed for proposals like a greenspace connection from the UGA Arch to the Lyndon House, “we might need to invest some public dollars sooner rather than later.” The plan suggests using tax allocation districts, which require taxes paid within an area to be spent there. Other aspects of the plan, too, are under consideration in various county departments—like workforce housing and transportation and development projects. The committee hopes to meet soon with director Pamela Thompson of the Athens Downtown Development Authority, which wants to expand its downtown boundaries; the plan’s own boundaries extend considerably beyond downtown proper.

Commissioner Melissa Link advocated a moratorium on large building projects, and said she feared that some of the public’s vision for downtown had been “lost” in the plan.

“A moratorium is not likely to happen,” Commissioner Kelly Girtz said. But Link responded, “… maybe we need to consider what our problems are, what some of the negative aspects are that pushed us into saying we need a plan, and have frank discussions about those.”