A Big New Medical Office (or Student Apartments?) Is on the Move Again in Normaltown 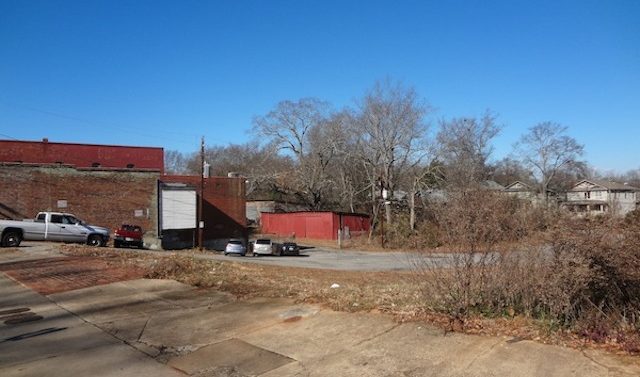 University of Georgia students’ appetite for “luxury” housing that costs more per bedroom than most peoples’ mortgages appears to be insatiable. So, with the Health Sciences Campus up and running and almost every scrap of land downtown built up six stories high—or about to be—with apartments, it’s almost inevitable that the booming student housing industry would set its sights on Normaltown. And, as usual, we’re completely unprepared for it.

A bit of background: In March 2012, William Slaughter filed plans for a 42,000 square-foot, four-story medical office and parking deck on the vacant lot where Allen’s and Fox’s used to be, between Normal Hardware and Marti’s. The plans were filed as Athens-Clarke County planners released a Prince Avenue corridor study that recommended, among other things, a cap of 10,000 square feet on medical offices (the same cap that applies to other types of offices in commercial-neighborhood zones).

This all began to unravel last week, when Logan Properties, which owns the parcel next door to the old Allen’s lot, filed for a permit to tear down a shed on the property. That shed was in the way of a driveway from Yonah Avenue into the parking deck proposed as part of the medical office development.

Meanwhile, the aforementioned corridor study remains in limbo in spite of heavy pressure from the neighborhood to start implementing it. A committee Mayor Nancy Denson appointed last year to vet the study’s recommendations accomplished nothing. Denson said nearly a year and a half ago that she would call a joint meeting of the ACC commission and the planning commission to continue the discussion; we’re still waiting on it. Maybe outspoken commissioner-elect Melissa Link can force the issue.

Whether this particular parcel is developed as a medical office or apartments, the Health Sciences Campus is going to be driving both types of development in the coming years. As a regional health care hub with an aging stock of buildings, Athens has a need for more medical office space. There’s also a huge market for student housing, especially of the “luxury” variety, in urban neighborhoods within walking distance of classrooms and bars.

The Health Sciences Campus has been driving up rents and home prices in Normaltown for several years already. The only way to keep the neighborhood affordable for anyone but wealthy students and doctors is to get denser. Few people want to halt the growth on Prince Avenue. We want to continue to see businesses thrive. Few people want out-of-scale structures looming over everything else, or to deal with parking decks dumping cars out onto tiny side streets, either.

There is nothing anyone can do about the Polo Club development, whatever form it takes, because it’s already on the books. There will be another, though, and another and another. The time to figure out how we want Normaltown to grow was probably five years ago, but now is better than never.

Chokeholds, Again: Last week, I wrote about an exchange with Oconee County Sheriff Scott Berry in which he wouldn’t tell me whether his deputies are allowed to use chokeholds on suspects. (ACCPD officers are not.) Berry wasn’t particularly pleased with my column, but he did eventually answer my question: “We don’t have a list of specific acts we allow or don’t allow by policy. As I originally replied, our use of force policy tracks the language in Graham v. Conner. We have dispensed with the outdated and unmanageable step-style use of force policy that was in vogue in the ’90s. We use the ‘objectively reasonable’ standard set forth in Graham v. Conner instead of having a list of things you can and can’t do. So we don’t directly address chokeholds, but they are not banned, either.”

Art or Ad?: Creature Comforts recently ran afoul of the ACC government when it commissioned a mural of one if its logos—a light bulb with the phrase “crave curiosity”—on the Pulaski Street side of its building. “The city very kindly informed us afterwards that there is a city ordinance that states a business may only have one sign per storefront, and because we use this logo as part of our brand, it would be considered signage and not art,” says the brewery’s blog.

This is a good excuse to pass on news that, after discussing and rejecting the idea of legalizing sandwich-board signs on sidewalks, the commission’s Legislative Review Committee has recommended allowing downtown businesses to have a second sign flush with a wall. The change is mainly meant to give restaurants leeway to post menus or specials outside their doors, but it would apply to Creature Comfort’s mural as well. A commission vote could come as soon as February, and if it’s passed, Creature Comforts plans to repaint the logo.

Transit and Taxes: A “plan B” for desperately needed transportation funding isn’t due until the end of the month, but a legislative study committee’s co-chairmen, Rep. Jay Roberts (R-Ocilla) and Sen. Steve Gooch (R-Dahlonega), dropped a couple of hints at the Biennial Institute, a gathering of state lawmakers at UGA. The committee is looking for a way to raise $1 billion a year, and its recommendations will “give some people some heartburn,” Roberts said. Could a gas tax hike be in the works?

Georgia has some of the lowest gas taxes in the country. Now, because cars are getting more fuel efficient and the federal highway trust fund is going broke, the Georgia Department of Transportation can’t afford the billions of dollars’ worth of projects needed to get metro Atlanta moving again, Commissioner Keith Golden said. Once federal cuts, maintenance and debt service are factored in, GDOT will have only $70 million for new projects this year, he said. For comparison, the price tag on a new I-85/400 interchange is $95 million.

Golden tried out a conservative states’ rights argument for increasing transportation funding: “We are much too dependent in Georgia on the federal government and that [federal] gas tax program,” he said.

Gov. Nathan Deal had little to say about the issue at the Biennial or the concurrent business-sponsored Georgia Transportation Summit at the Classic Center. Lt. Gov. Casey Cagle, however, came out in favor of expanding MARTA, which receives no state support and is traditionally a whipping boy for suburban Republicans. Cagle tied transit to economic development, noting that businesses want to locate along commuter rail lines because many of their millennial employees don’t own cars.

We in Athens, of course, have been clamoring for passenger rail for years, and without giving away any details, Roberts implied that it will be part of the study committee’s report. “We’ll have a comprehensive plan that’ll deal with all the issues facing Georgia,” he told me. “I think you’ll be happy.”

Check out Capitol Impact for Tom Crawford’s take on this topic.