Gangs Are Poised to Grow in Athens 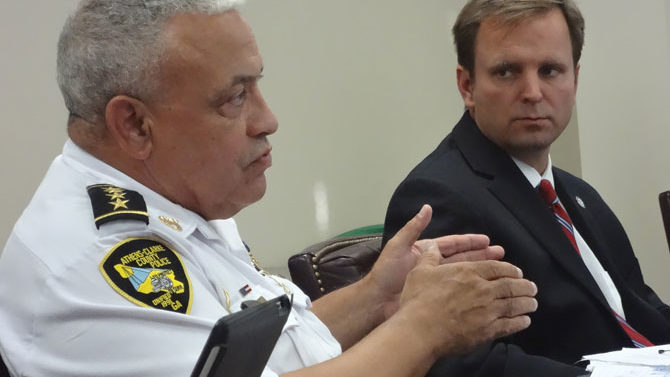 As you’ve probably heard by now, Jack Lumpkin is retiring as Athens-Clarke County police chief and is in the running to be Savannah’s top cop. It’s a job for which he’s well suited. Savannah is in many ways an overgrown version of Athens, a drinking town and a tourist town with rampant poverty and all the problems that go along with it. If anyone can turn around that scandal-plagued force, it’s he.

Lumpkin has, well, taken his lumps in his nearly two decades as Athens police chief, but on the whole, he’s done a terrific job. Crime is down, and in spite of some people’s perceptions, Athens is statistically one of the safest cities in Georgia. In particular, Lumpkin has worked to build trust with our minority communities. Some might say he hasn’t done enough, but the police department’s relations with those they’re sworn to protect and serve have improved since he returned from a stint in Albany in the mid-1990s.

It’s too bad Lumpkin won’t be around to see this through, but before he leaves, he has one last crusade. Gangs, he says, are on the brink of making a comeback.

The harsh sentencing laws passed under Gov. Zell Miller are about to bite us in the butt. Members of small, neighborhood “hybrid” gangs who went to prison in the ‘90s are being released as Bloods, Crips and Aryan Nation and Sur 13 members, Lumpkin told the ACC Commission’s Government Operations Committee Sept. 17. And they’re recruiting local teenagers into those far more violent national gangs, he said.

“I’m not suggesting the sky is falling,” he said. “What I am suggesting is you can’t arrest your way out of it. All the experts and all the literature says you have to prevent.

So this is a community problem, not strictly a police problem, and it will take a community effort to nip it in the bud. That starts with ACC and the Clarke County School District partnering with nonprofits to establish more programs that keep at-risk youth—a phrase Lumpkin doesn’t like but uses for lack of a better one—to keep them on the right path.

“We haven’t always developed all the youth in this community,” he said. “That has to change as you become a real urban center… If you don’t develop your youth, you’re going to have a core here that’s crime-ridden very shortly.”

Public schools are doing their part, according to Lumpkin. “You’ve got kids who believe they can actually finish school,” he said. “We haven’t always believed we can educate minority kids or those from single parents, poor families. The group of teachers now, they believe they can do it.” But cut after cut after cut from social services and ACC Leisure Services after-school and summer programs are taking their toll, he said.

Lumpkin knows what he’s talking about. He grew up in Athens, where, as he said last Tuesday, his relationship with Commissioner Harry Sims “started with me knocking him down.” “In football,” Sims clarified. Both overcame disadvantaged upbringings and went on to success, but many other kids from similar backgrounds join gangs out of a desire for status, because of a bad situation at home, or because they don’t see education as a viable option.

“What the kids don’t see is their potential,” Lumpkin said. “What the gangs don’t tell them is in five years, they’ll be beat up, shot, cut or in jail. We’ve got to get the message out that it’s a dead end.”

Juvenile Court Judge Robin Shearer echoed many of Lumpkin’s comments and told the committee that she has seen an increase in sexual exploitation, meth use among parents and children going into the foster care system. Gov. Nathan Deal’s progressive criminal justice reforms will help down the road, she said, but they’ll do nothing for those sentenced under past zero-tolerance policies who are emerging from prison as hardened gang members.

With Lumpkin on his way out, Sims is taking the lead. “We have to get a handle on this quickly,” he said.

What’s in a Name?: At the same meeting, the GOC also took up Commissioner Jerry NeSmith’s suggestion to rename East Athens Park after a person, rather than Trail Creek Park, as Leisure Services recommended. While a few prominent, late East Athens residents come to mind—Miriam Moore, Jessie Barnett and Evelyn Neely among them—commissioners didn’t want to choose from among a number of deserving people. They’re sticking with Trail Creek Park to avoid confusion with the East Athens Community Center. One thing’s for sure: “It won’t be Harry Sims Park,” Sims said. Never say never, Harry.

Automatic Pizza: The commission’s Thursday, Sept. 18 agenda-setting meeting was, as is usual lately, about as brief and boring as a date with Nick Saban. But a couple of things worth noting: Bain Mattox’s new Normaltown restaurant, Automatic Pizza, won approval for a waiver to serve beer and wine within 300 yards of the UGA Health Sciences Campus and is scheduled to open in mid-October.

The commission is also set to approve a pretty cool managed-forest program at Sandy Creek Nature Center.  A lack of wildfires means that parts of the park are growing in ways that aren’t natural or suitable habitats for wildlife. Funded by $67,000 from the nature center’s nonprofit arm, the project will use controlled burns and other methods to create five five-acre plots of managed forests that, decades from now, will show visitors five stages of a forest’s natural evolution.

Sunday Voting: The Athens-Clarke County Board of Elections will, in fact, consider holding early voting on at least one Sunday when it meets Oct. 7. Two groups on the far left and far right—Occupy Athens and the local branch of the Libertarian Party—have joined together to urge the board to open the polls for two Sundays next month, noting that, while one Saturday of voting is a start, it’s still tough for working people of all political persuasions to vote during business hours.