Ding Dong, The Selig Is Dead 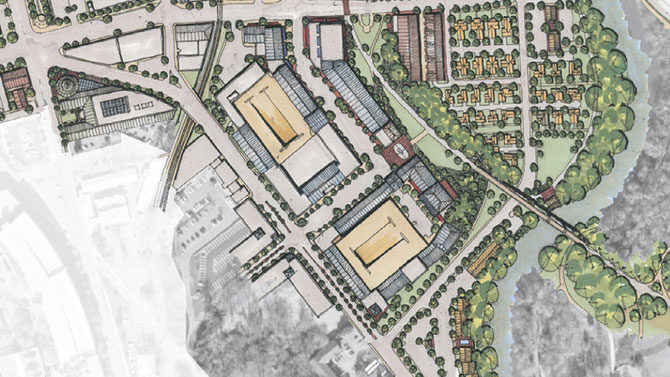 All that for nothing.

Two years of screaming, crying and hand-wringing over the soul and future of downtown Athens ended last week when Flagpole broke the news that Selig Enterprises was scrapping its plans for a massive mixed-use development between Oconee and East Broad streets.

Jo Ann Chitty, the Atlanta company’s senior vice president, cited a marketplace that had changed significantly over the last six months, as well as rising construction costs. Selig was late to its own party. While they tweaked and improved their plans, other developers started construction on nearby student apartment complexes, perhaps saturating the market in lenders’ minds.

“It’s bitterly disappointing,” Chitty said. “It has been a dream of ours to build a project in Athens that the community could be proud of.”

Well, many people in the community weren’t proud of it. The project’s progressive critics reacted with glee, while conservatives hauled out the old anti-business trope, blaming the “whining brats” and “pants pissing children” as Jeff Snowden referred to our most engaged citizens, for the project’s failure.

The truth is, this was purely a financial decision on Selig’s part not to throw good money after bad. While local residents’ constructive criticism. much of it readily accepted by Selig, may have delayed the project until market conditions were no longer favorable, otherwise NIMBYism was not a factor here. Most major developers view community opposition, whether here or any other city, as simply a part of doing business, and Chitty left the door open for another project in Athens.

Now, the question is, what’s going to happen to the former Armstrong & Dobbs tract? Sorry, it’s not going to be a community garden or some other hippy-dippy fantasy, and we can’t have it sitting there vacant. It’s just too valuable a piece of property. Some kind of fairly dense mixed-use development belongs there, and hopefully, another developer who has learned lessons from the Selig uproar will build something slightly more modest that is integrated into the rest of downtown and our nascent alternative transportation network, complementing and enhancing what’s already around it.

As the largest privately-owned parcel downtown, the Selig tract will continue to attract attention, although the sudden spate of student housing could lead to a “pause” in investor interest, according to downtown master plan czar Jack Crowley.

“Often after one project doesn’t get off the ground, a subsequent project learns from the first and improves on it,” Crowley said. “I believe you will see new proposals on the A&D property shortly.”

Since so many people dislike the big, bland new buildings coming downtown, we have a golden opportunity now to tweak our zoning code to ensure that the development we get is the development we want. Commissioner Kelly Girtz is pushing for new regulations to create shorter blocks, vary height and architecture, limit size, restrict parking and improve the way buildings relate to the street in new developments. In short, to make them look like the rest of downtown.

We don’t need to rush anything through, but ACC officials also can’t drag their feet the way they have with the Prince Avenue corridor study. Those new regulations should be in place by the time the next set of plans is filed for Armstrong & Dobbs.

This week, you’ll find articles from Stella Smith, who specializes in historic preservation; Nick Sexton, a UGA law student and blogger at sustainableatlantaga.com and Jennifer Grimes, a city planning graduate student at Georgia Tech; and Melissa Link, who fought the development with People for a Better Athens, on what they think should be done with this key piece of property now that Selig is out of the picture. We’d also like to hear from readers, so send your thoughts to letters@flagpole.com.

Georgia Power Rate Hike: About three dozen people came out to a public meeting at the UGA Chapel Wednesday, Oct. 30 to voice their concerns over Georgia Power’s plan to raise rates.

The utility says it needs the revenue because earnings fell off 13 percent during an unusually cool summer, according to the Associated Press.

The new hike and fee would go into effect on Jan. 1, and many see it as Georgia Power’s way of adding a tax or tariff on people who attempt to use sustainable energy.

“I wonder about the logic of adding another tax to my power bill,” Basil Campbell said. His bill is already 40 percent taxes, and adding a solar “tariff” would more than likely bring it up to 50 percent, he said.

In less than a decade, Georgia Power’s rates have increased on average about $44 per month, or about $600 a year, according to Liz Coyle, deputy director of the consumer advocacy group Georgia Watch.

“We want to see as much clean energy come online” as possible, said Seth Gunning, a member of two environmental groups, the Sierra Club and Beyond Coal. The proposed solar surcharge could deter people from sustainable energy, he said.

The Public Service Commission is scheduled to vote on the requests Dec. 17. Athens’ representative on the PSC, Tim Echols, said he hasn’t taken a position. “I wasn’t really elected to rubber stamp anyone’s plan,” he said. “I want to do what’s best.” [David Schick]

Justice at UGA: Retired U.S. Supreme Court Justice John Paul Stevens will give a speech on freedom of the press at a UGA law symposium Wednesday, Nov. 6. Registration for the symposium is closed, but Flagpole will be there. If you’re interested in what Stevens has to say, check our In the Loop blog.