Election Day Voting Could Be a Big Hassle in 2014 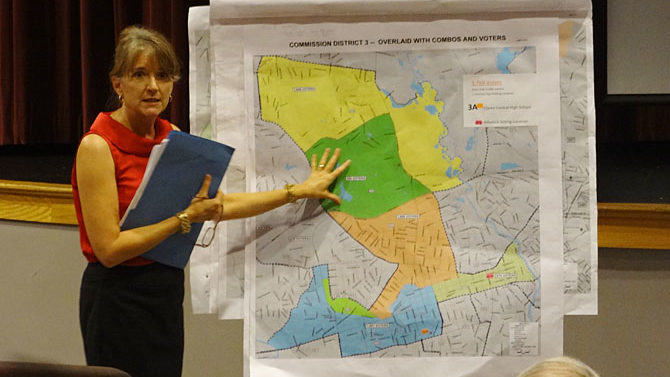 Voting is a sacred right—one that you might not be able to exercise without driving halfway across town next year.

The Athens-Clarke County Board of Elections is proposing to eliminate 10 polling places in 2014. The popularity of early voting means not as many people are casting ballots on Election Day.

With the money it saves, the board plans to open new early voting sites at the police stations on Lexington Road and at Georgia Square Mall, in addition to the voter registration office downtown.

“It’s not just Election Day anymore,” Supervisor of Elections and Voter Registration Gail Schrader said at a public forum on the proposed changes last week. “If it’s easier for people to get to one of these other locations or to vote by mail, we encourage that.”

Some people have criticized the idea of voting at police stations, saying that some voters might be uncomfortable with it. But it’s important to note that, if that’s the case, those voters would still have the option of requesting an absentee ballot, voting early downtown or voting at their precinct on Election Day.

A bigger concern is the distance that some voters will have to travel if they do their civic duty on Election Day. Many of the proposed polling locations are on the edges of districts, and some are not even in the districts. For example, District 7’s sole polling place would be Barrow Elementary, which is actually across the street from that district, in District 4, where the sole polling place would be Memorial Park.

But Five Points voters are generally pretty affluent, and it shouldn’t be hard for them to drive a couple of miles to vote. In poorer neighborhoods, it might not be so easy.

Voters in District 3’s mostly poor, mostly Hispanic Garnett Ridge neighborhood would have to somehow get to Clarke Central High School in order to vote on Election Day. Without a car, that would involve a nearly three-hour round trip by bus.

Again, though, it will be easier to vote early with three locations, and mail-in ballots are available to everyone by request.

Schrader said the board considered where voters are concentrated when choosing which polling places to keep, rather than looking for a central location. She also said options were limited. State law encourages local governments to use government buildings like schools as voting sites, and they should also have ample parking.

Then there’s the difficulty of making sure voters are informed of where they should go. A lot of people probably still don’t realize that commission districts have changed drastically, thanks to the Republicans in the legislature who gerrymandered them to try to get conservatives elected. Precinct lines stayed the same last year, but in 2014, by law they will have to shift to line up with the new districts. Going to the wrong polling place is one thing; at least someone is there to ask where you should be. Going to your old polling place and finding out it’s closed is another.

If the commission approves the new precincts, Schrader said her department will mail cards to every voter telling them where to vote. She’s also considering other means of communication, such as advertising, notices in church bulletins, signs at businesses and inserts in water bills.

“We recognize that’s an issue and something we need to work on,” she said.

Moar Parking: Here’s an interesting outtake from my Sept. 11 story on the downtown student apartment boom (ICYMI, direct your Interwebs browser here) that didn’t quite fit in. People have been asking, since the part of the point of living downtown is to be close to lots of stuff you can walk to, why do all of these new apartment buildings have huge parking decks? Especially since downtown has four decks already, one of which (Washington Street) is rarely full.

“They’re going to have a car when they come to Athens. Most of them are from Atlanta,” said Wes Rogers, CEO of Landmark Properties, the company behind The Standard at Thomas and Dougherty streets. “Hopefully, they’re not going to drive it much, but they still want to know it’s there.”

Depending on whether Foundry at Broad (aka the Selig development) is ever built, between 1,000–2,000 people will be moving downtown over the next couple of years. If even half of them have a car, that’s way too many for our existing decks to handle, and we haven’t even gotten into how many cars those developments’ new retail space will bring downtown.

Speaking of, plans for GEM Athens, the development slated to replace part of the SunTrust building and the adjacent parking lot, were officially filed last week. It will include 292 mostly one-bedroom apartments aimed at young professionals, as well as 20,000 square feet of commercial space that could (fingers crossed) house a small grocery store.

Soul on Ice: ACC commissioners Allison Wright, Jerry NeSmith and Jared Bailey still hope Paul Cramer’s plan to turn the Classic Center’s exhibit hall into a part-time skating rink falls through. They were outvoted last month, when a majority of commissioners approved a $5.4 million bond issue for a parking expansion, bleachers and other equipment for “arena-style events” like ice skating (though, emphatically, not circuses). At the Thursday, Sept. 19 agenda-setting meeting, the trio floated a plan to trim $1 million from the bonds and ditch the ice-making equipment. They didn’t seem to convince any of their colleagues, however, and the ice equipment is key to the overall plan, because the Classic Center will be relying on hosting University of Georgia hockey games for revenue. A vote is scheduled for Oct. 1.