Whatever Happened to the Downtown Master Plan? 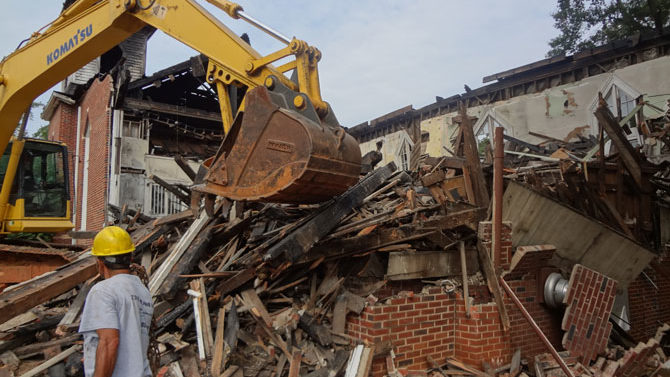 Remember the downtown master plan? The plan’s architect, Jack Crowley, presented a draft to the Athens Downtown Development Authority in June. Since then… crickets.

No need to worry yet, though. It’s still on track, more or less. Crowley had to take a break to deal with reaccreditation at the University of Georgia College of Environment and Design, where he is a professor.

Now, Crowley is holding a few additional meetings after a group of Downtown Athens Business Association envoys, led by First American Bank & Trust Vice President Janey Cooley and Chick Piano owner Anne Shepherd, complained that they had been left out of the process, in spite of Crowley having met with thousands of people already to gather input on the plan. Those meetings had yet to be scheduled as of press time.

“We do want to take the time have some extra input so that everyone, all our stakeholders, feel like they’ve had their say,” ADDA Executive Director Pamela Thompson said.

Crowley is now tentatively scheduled to present a final draft to the ADDA next week, which would put it on track to be adopted by the Mayor and Commission as early as November (two months behind schedule). Then the hard part begins: finding the funding and political will to actually implement the plan.

Speaking of the ADDA, its annual retreat is scheduled for 8 a.m.–5 p.m. Wednesday, Sept. 4 at the Foundry Park Inn, where Thompson and the board will prioritize a work plan for the year. It’s a public meeting, so feel free to drop in. Should be interesting (no, really).

Oconee Street UMC: Last week, workers starting tearing down the shell of Oconee Street United Methodist Church, which burned down in April, in preparation for building a new church on the same spot.

The church was a total loss. When asked whether any of the structure could be salvaged, rebuilding committee chairwoman Maxine Easom said, “We’re saving some of the bricks, but pretty much no. It’s all burned up.”

The old church was demolished in a couple of days, but it will be a while before construction starts on the new church. It’s scheduled for completion in 2015. The design isn’t done yet, but the new church will have the same footprint as the old one, Easom said.

Since the fire, Oconee Street UMC members have been worshiping at Tuckston UMC on the Eastside after a brief stint at the smaller Young Harris on Prince Avenue.

When the new church is finished, Action Ministries, the nonprofit that runs Our Daily Bread, won’t be returning. The soup kitchen has been operating out of First Baptist Church downtown, where it has more space, and members voted Sunday to let it stay permanently, Easom said.

Bike Paths: A couple of weeks ago, Flagpole told you about plans to widen the College Station Road bridge to accommodate bike lanes and extend them from Research Drive to Barnett Shoals Road. Off-road bicyclists should not feel left out.

The Athens chapter of the Southern Off-Road Bicycle Association has built 1.7 miles of beginner/intermediate bike trails at East Athens Community Park off Loop 10 at Peter Street and several more trail miles are on the way. (Trail heads are unmarked, so consult the park’s website.) SORBA also built the 10 miles of intermediate/advanced trails at Heritage Park south of Watkinsville. [John Huie]

Election Confusion: U.S. District Judge Steve Jones—concerned that overseas military personnel would not receive runoff ballots in time—recently ordered Georgia’s partisan primaries for federal office moved up to May 20, 2014, with an inevitable (at least on the Republican side) runoff eight weeks later.

Political experts believe the move away from the dog days of July will likely increase voter turnout and make the GOP more likely to nominate a (relatively) moderate candidate for U.S. Senate. The same applies for congressional races like the one to replace Rep. Paul Broun (R-Athens). It will also give the Republican nominee more time to recover from a divisive and expensive primary before the November general election.

Or will it? Will voters be aware of the change? Will they be ready to make a decision when early voting starts in April?

State officials are likely to move up primaries for state office to match the federal dates, which makes sense. It’s unclear, though, how local elections will be affected. “We don’t know,” said Gail Carter Nash in the ACC Board of Elections office.

When the election is held is especially important in Athens-Clarke County, where voters have been jerked around enough already. Before 2004, when local races were partisan, the summer Democratic primary was the de facto general election. Then we started electing a nonpartisan mayor and commission in November. Last year, a change to state law meant that our nonpartisan local elections moved back to July, in conjunction with the primaries.

They’re likely to change again. Legislation that will be proposed next year to move state primaries up to May 20 to match federal primaries will cover local elections as well, said Jared Thomas, spokesman for Secretary of State Brian Kemp. “We don’t feel like anybody would have the appetite to run two elections,” Thomas said.

That means qualifying for mayor and commission races would take place the week of March 17, less than six months away—not much time to gear up a campaign. Anyone who hopes to send Mayor Nancy Denson or any of the incumbent commissioners packing had better get started.

Minimum Wage: A group called Georgians for Local Economic Control launched a campaign on Labor Day to convince the state legislature to overturn a law barring local governments from raising the minimum wage (fat chance). One of the lawmakers it’s targeting is our own Rep. Chuck Williams (R-Watkinsville). His email address is chuck.williams@house.ga.gov, if you’d like to drop him a line.