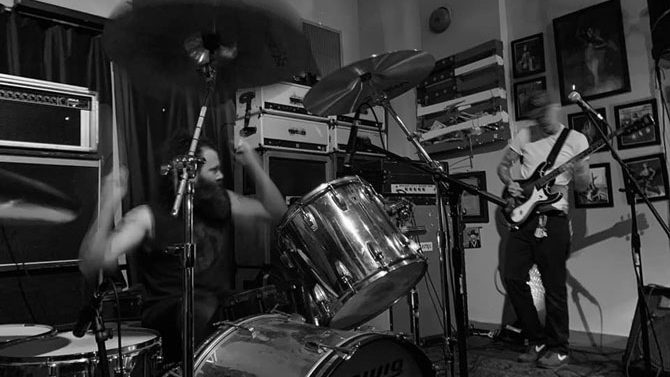 JAWBONE CITY: The debut by duo Mandible Rider came out last week, and if there were ever an instance that something could be dubbed “brought to you by the Caledonia All-Stars,’” it’s this. The band itself is composed of Jason “Mohawk” Richardson on drums and vocals and Daniel Shroyer on baritone guitar and vocals. Longtime Caledonia sound engineer Gene Woolfolk and peerless Athens live music archivist Sloan Simpson recorded the instrumental tracks. Then, Woolfolk and Joel Hatstat recorded the vocals. Then, Simpson mixed the whole thing, and Hatstat mastered it. But enough resume writing. What of the tunes? For a band that’s often categorized—at least by me—as metal, this debut showcases some solid goth leanings, too. From the slowly building and bottom-heavy opener, “The Arbiter of Second Chances,” to the complexly developed middle track, “Palette,” this seems a clear influence. The band finishes things up with two back to back metal shredders, “The Devil’s Eyes Are Pouring Tears” and the relatively epic length “Pigs in Shit.” Put on a helmet and take your chances over at mandiblerider.bandcamp.com.

HAPPY ANNIVERSARY: Athens venue Live Wire will celebrate the milestone anniversary of five years with a benefit for Nuçi’s Space. Beginning at 3 p.m. on Saturday, Jan. 18, the venue’s owners will offer music and barbecue and have noted that vegan options will be available. Featured performers are Athens bands Heart of Pine and Harvey Funk & Walker, Nashville’s Valerie Raye, Atlanta’s Moon Chief and Greenville, SC’s The Grateful Brothers. Tickets are $10 in advance and can be purchased via livewireathens.com. Also, congratulations to all involved in bringing this event to fruition. Running a live venue in downtown Athens is among the most difficult undertakings a proprietor can, uh, undertake. So, kudos to y’all.

BY GOLLY: Multi-instrumentalist George Huntington writes and records under the name George. He’s got a solid fistful of releases under that name, but his most recent one is a six-song record named Write as Rain. Although it’s what I would call refreshingly genre-free, it tends to swim in the deep end of its most observable influences: trip hop, 20th Century composition and absurd psychedelia. The most readily accessible track is the final one, “Lemons Pearl,” which delivers Huntington’s blurry vocals just underneath a lazy river of a tune built with acoustic guitar, synthesizer and hand drums. The record begins equally strong with the ripe-to-be-sampled “64’s64” and the day brightener “Working Posture.” Take a swim in this at thegeorgie.bandcamp.com.

GET IN TOUCH: Montu Miller of AthFactor Entertainment has put out the call for a variety of talent who might wish to perform at the Leaping Into Black History 2020 event. This presentation, brought to you by the East Athens Community Center, will happen on Leap Day, Feb. 29. Miller notes that this event will “include a black history museum room, food and entertainment. There will be a showcase of community talents that include poetry, dance/step, singing, hip hop and more.” To this end, he’s seeking family-friendly DJs, singers, choirs, gospel performers, R&B acts, instrumentalists and jazz musicians, in addition to the aforementioned hip hop, etc. Interested parties should contact Miller post-haste at athfactor@gmail.com.

AGAIN FOR THE FIRST TIME: Right smack dab in the middle of December’s dead time, Love My Truck quietly released three new tracks under the title Born and Raised in the Desert. Just when you thought the night couldn’t get deeper or darker, here come these guys with three more shards of beautiful melancholy. That said, they never really repeat themselves. On this collection, Love My Truck opens with the mournful and pedal-steel-swept “Clown Motel” and closes with the dreamy mid-’70s vibe of “Time at Home.” But they change their own game in high style right in the middle with “Jepis 2.4.” The vocals arrive over the music like a narrator, and the tune wobbles in and out of focus with echoed howls and unsettling keys. It closes out its final minutes by merging all its parts into a comfortable rhythm, but as soon as this satisfaction is reached, it’s gone just as quickly. I mean, damn, son. Cry now, cry later at lovemytruck.bandcamp.com.