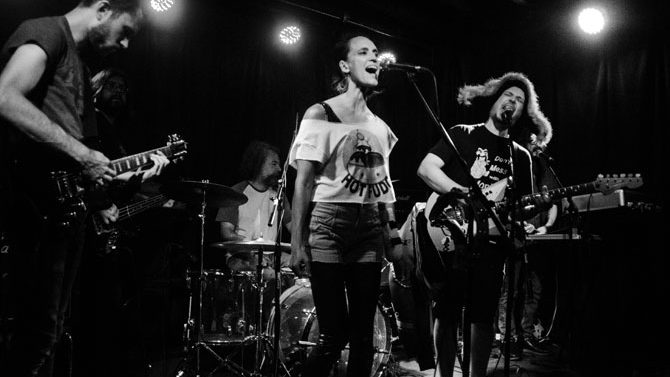 POUR IT ON: It’s been a few years since there was an official release by Hot Fudge. That’s been rectified by the brand spankin’ new album Mal Camino. The seven tracks here should serve to reestablish and further solidify the band’s presence as a unique force in the Athens scene. They’ve always occupied an area best described as a musical Slush Puppy machine that mixes up ’70s glam and pop, a bit of bright heavy metal, some Cheap Trick-isms and the like. Mal Camino continues the theme in swell fashion. Absolute standout tracks include “Heavier Than Ever,” “Shameless” and “Eternity Road.” Now, this is available digitally—albeit reportedly as a different mix than the final version—as we speak, but it’ll be released as a vinyl LP Nov. 7. That night, the band will celebrate its release at Flicker Theatre and Bar with Calico Vision and Orlando’s Timothy Eerie. Check this out via hotfudgeathens.bandcamp.com.

FIVE BITS FROM THE KID: Kid Arsenic (aka De’Sean Owens) recently released a new EP named Post Mortem. It’s emotionally confusing a lot of the time, mainly due to being thematically heavy (“Post Mortem,” “Pray for Me”) but most of the beats being relatively high-energy with a certain bounce to them. An exception to this is “100 Proof,” which samples a cool jazz riff, and the previously mentioned incongruency dovetails into solid form on the title track. Owens says listeners will be able to find this at soundcloud.com/thekidarsenic, so head there and check it on yr own.

CONGRATULATIONS, Y’ALL: The National Association of Music Merchants Foundation (NAMM) has designated the Clarke County School District (CCSD), for the seventh year in a row, as one of the United States’ Best Communities for Music Education (BCME). This designation is given to “districts that demonstrate outstanding achievement in efforts to provide music access and education to all students.” The process of receiving this recognition is pretty involved, and the announcement mentions that “CCSD provided detailed information about funding, graduation requirements, music class participation, instruction time, facilities and support for the music programs. Responses were verified with school officials and reviewed by the Music Research Institute at the University of Kansas.” For more information, see nammfoundation.org.

ANOTHER ROUND: I rarely shout out one-off shows that have no connection to a record release, tour or something of the sort. But as the year begins to wind down and everyone is starting to make their best-of lists—at least mentally—I wanted to draw your eyes and ears back to guitarist and songwriter Grayson Hauser. He released his totally enjoyable and entirely personable album The Blues of a Distant Earth back in spring. The Athens scene can often be difficult for creative folks who don’t easily fit into a mold—part of the delicious irony of a scene that prides itself on celebrating its non-moldy-ness. And Hauser, for his part, never appears to really be trying to do anything other than write good songs, which has often led to a divergence of styles permeating his blues. Anyway, give him a new listen at graysonhauser.bandcamp.com, and if it’s your bag, head to Flicker and catch up with him on Wednesday, Oct. 23.

BRIEFLY: Even though I’ll mention this again in the coming weeks, let it be known that Dagmar Vork will release the new album Suffer Fruit Demos on Oct. 31. For now, though, you can stream two tracks and preorder the thing at dagmarvork.bandcamp.com. The two showcased via preview (“SF1. a car with no lights on” and “SF2. dogs and friends”) are each pretty traditional compositions with distinguishable verses and melodies, etc. Vork slips fully into the sublime on the second track. I could have stood well for a 10-minute loop of the last several seconds. It’s that nice.