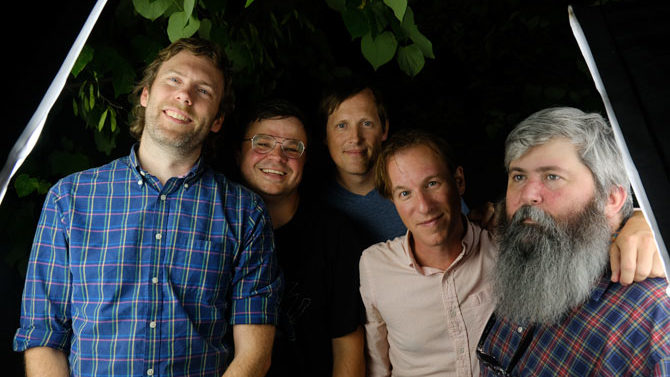 YOUR FRIENDS AND NEIGHBORS: If we’re speaking very strictly—which I admittedly do all the time—the two-decade-old Je Suis France isn’t totally a local band anymore. With members hither and thither and only one Clarke County mailing address among them, they really needed to bring the goods to the table in order to slide their new album into the canon of Athens rock and roll. Good lordy, did they ever! Their new full-length will come out in November courtesy of Ernest Jenning Recording Company. It’s titled Back to the Basics of Love and contains 13 tracks. Because this thing is still in pre-order mode, you’ll only get to hear the fuzzy indie-rock jammer “House Style,” which is, I believe, quite enough to bug yr ears into dropping some cash. Honestly—and all joking and personal familiarity and friendship with these dudes aside—this album is incredibly well conceived, composed and executed. Stylistically, it recalls what some consider peak indie rock/college rock (i.e., mid-1990s to mid-2000s). There are a few different price points at which you can pre-order this, but why not go with the $1,000 option? Get your helipad ready and jump over to jesuisfrance.bandcamp.com, and friend ’em up at facebook.com/JeSuisFrance. Also of note, by the time you read this, it’ll be basically 19 years to the day the band’s self-titled debut was released. Ain’t that something?

THE AIR UP HERE: Athens’ premier—and possibly only—botanical rock band, Wet Meadows, released its self-titled album a couple of weeks ago and celebrated with a show at Flicker last week. If you’re wondering what “bot rock” even is, the band explains it fairly well on the album’s webpage. I can tell you in layman’s terms that this record is a total psych-folk exploration. And it’s a hell of a good one, at that. I suppose some might think this is a perfect summer album, with its breezy gentleness and subdued moods, but I imagine it as a spring and autumn record, wonderful for sunny and cool afternoons. Highlights span the whole album, but in particular, “Out on My Bicycle,” “Strong Signal,” “Unstable” and “Late Summer” really deliver. Recommended if you dig The Hollies, Galaxie 500, Velvet Underground and/or Chad and Jeremy. Lie down and listen at wetmeadows.bandcamp.com.

SWEAT LODGE: There’s a hint of a new project from Gene Woolfolk (The Powder Room, T. Hardy Morris) sliding around the internet. It’s named Dream Tent, and the item in question is a track named “Cortisone.” Woolfolk plays everything on the determinedly shoegaze/dream-pop tune. Indeed, run this through the band-blender and you’ll hear pieces of Slowdive, Ride and My Bloody Valentine, plus a telltale nod to Nirvana from 2:15–2:30. (You’ll hear it.) Known in large measure as a noise rock/punk/hard rock dude, Woolfolk is actually, at his very core, a song guy. Besides, he already made his shoegaze bones years ago via his old band A Jetpack Operation. This new Dream Tent track is most definitely a demo and deceptively slow for its overall heft, but is hopefully a sign of an ongoing thing. Fair warning, though: He says this whole thing is supposed to be an exercise in genre-hopping, so upcoming tracks could be wildly different. For now, click over to dreamtent.bandcamp.com and stare at the floor.

COOL FOR CATS: Sorta psychedelic, sorta pop, sorta curious band Calico Vision—first prize goes to the newly informed who correctly guess what the name is a pun on—will celebrate the release of its new album Saturday, Aug. 31 at the 40 Watt. Also on the bill are Wieuca, Kudzu Samurai and Philadelphia’s Secret Nudist Friends. The version of the record I heard wasn’t mastered yet, mainly due to mastering master Joel Hatstat being outta town. I couldn’t tell, though, as it all sounded very well balanced and attuned. (Go ahead and give me grief, engineers, if either of those things aren’t aspects of record mastering. I would.) This record has been difficult for me to wrap my head around even after a solid few spins. The twin aesthetics of Calico Vision are this particular way the guitar is strummed (kinda plunky, but really bright and joyful) and the vocals (similarly joyful and bright). I’ve enjoyed them a whole bunch in live settings, but this album made me think everything was either too fully arranged or not arranged enough. Hell, maybe that’s what mastering would have revealed. Once this is out for real, I’m gonna give it another go. You, on the other hand, should jump right in at facebook.com/calicovisionband.