Grayson Hauser’s Got Personality, and More Music News and Gossip 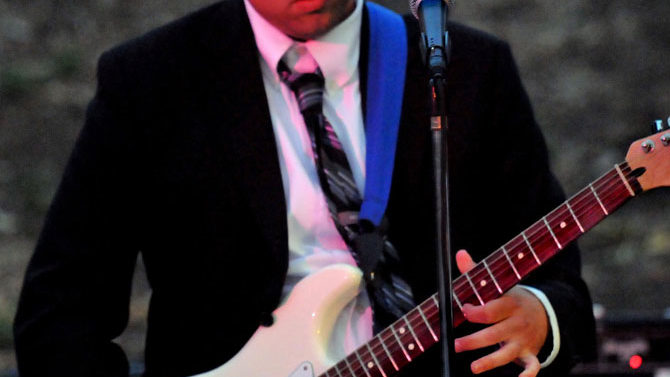 BLUES HAMMER TIME: Guitarist Grayson Hauser will release his new album Wednesday, Mar. 27 at Flicker Theatre and Bar. It’s titled The Blues of a Distant Earth, and it’s so hugely different from his debut EP, Portraits, that it’s unrecognizable to anyone expecting more of the same. Where that previous record was a gentle, thoughtful exploration into pastoral guitar territory, this one is a heavy cold-water bucket of blues-rock (“I Don’t Care Today”), ’70s-era studio styling (“This American Lie”) and groovy-beer-hoisting bar-rock (“Free My Soul”). Although Hauser does revisit his previous style on the legitimately solid “Drifting Through Time,” there are too few instances of this to really connect the two. As with his previous release, Hauser is an extremely honest writer who tends to leave in what others would jettison (the times he giggles during certain vocal sections, etc.). This record is also a real hymn to the working class and politically and economically downtrodden. Those positive aspects won’t be enough to distinguish Hauser if he continues to dive deeply into the blues game, where it’s exceedingly difficult to set oneself apart from the crowd. That said, he does have personality, and, you know, personality goes a long way. For more information, see graysonhauser.com and facebook.com/graysonhauserguitar.

NEW TRACK RISING: Singer-songwriter Cortez Garza has been plowing the fields of Athens music for a hell of a long time. During these years, his voice has settled nicely into a tone that eschews boyish earnestness while at the same time avoiding old-man cynicism. He’s got a new EP coming out in April, but the lead single leaked out a couple of weeks ago. It’s named “The Ingénue,” and as you can gather, it’s about a girl, but in more ways than one, it’s less about her than the singer himself. (That doesn’t mean Garza, necessarily, but he’s the one delivering the story.) The tune is a relatively simple-sounding acoustic guitar composition, and the song’s strength comes less from its construction and more from its delivery. Visit Garza online at cortezgarzamusic.com.

KEEP IT SMOOTH: UGA music business student Jordan Brower reps Atlanta, for the most part, but because he’s a student and trying really hard, I’m gonna give him a pass and treat this new EP of his as local. It’s titled Close Enough, and it’s easily the most radio-ready thing the Classic City can (sort of) claim this year so far. Bower navigates his vocals over modern R&B beats, and he’s got a solid handle on everything in terms of timing his laid-back approach. I’m much more partial to tracks like “Only One,” where he seems quite comfortable, than I am with “So Much to Say” and “Peaking,” where the vocals are overly breathy and every bar ends with his exhaling as if exhausted. I know that’s the style right now, but still. The production values, though, from beat composition to execution, are top notch. If the Booty Boyz ever bothered to listen to local music, they’d probably spin some of this during a slow-jam session. As it is, you can play it whenever you’re ready at all major streaming services and soundcloud.com/jordan_brower.

TRYOUTS FOR THE HUMAN RACE: New wave doo-woppers Delorean Gray can now claim Athenians Freeman Leverett and Jason Bronson as members. (The project was previously the sole domain of Jacob Chisenhall.) I can’t say definitively if this has improved the music, as last year’s Star Tropics was a surefire winner without them. But it certainly hasn’t hurt anything. To wit: a brand new album named Otaku Punk. I’m pretty sure there’s an ongoing narrative between last year’s record and this new one, but I can’t figure out what it is, so let’s talk about the tunes. There’s more of a pronounced Sparks influence here, but there are also sweeping waves of MOR melody (“Aristonauts”) and warm, top-down, preppy keyboard pop (“Siberian Summer”). Overall, and quite unlike some of Delorean Gray’s contemporaries, this is largely a timeless sound. And that’s a compliment, if you couldn’t tell. Check it at graydelorean.bandcamp.com.