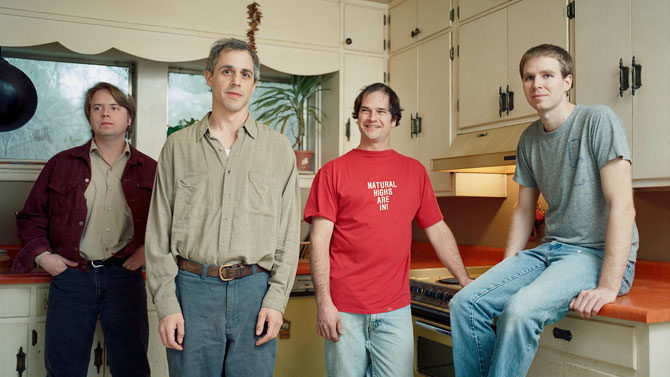 GLAND GESTURE: In a move that can best be described as a labor of love, New West Records is planning a truly magnanimous tribute to Athens band The Glands. The group was long a favorite among discerning fans, even while its actual output and live schedule always left those fans wanting more. To the issue of recorded material, New West has got everyone covered. First, the long-awaited and often-rumored third album by the group, Double Coda, will see release Friday, Nov. 9. (The label will host a listening party at the Georgia Theatre the same day.) The album runs a whopping 23 tracks, and its final production was overseen by drummer Joe Rowe, bassist Derek Almstead and engineer David Barbe. Additionally, the label is re-releasing the band’s 1996 debut, Double Thriller, as well as its self-titled 2000 album. Each of these is to be available via digital outlets, as well as on vinyl and CD. But the real treat here is the five-record box set I Can See My House From Here. It’ll feature all three albums—two of which are double LPs—as well as a 52-page book of essays, testimonials and photographs from an astounding cross-section of artists, musicians and friends. Glands founder and songwriter Ross Shapiro passed away in 2016. While it’s impossible to truly discern what he’d think of all this, chances are good he’d crack a wry grin and say, “That’s cool, y’all.”

JUST CAN’T GET ENOUGH: Author of the incisive book Babbling Corpse: Vaporwave and the Commodification of Ghosts Grafton Tanner is back in the musical ring with his new project, Superpuppet, and a new EP, Museum. Based on his participation in certain other local groups (Programs, Scooterbabe), the electronic pop sound he perpetuates here isn’t a total surprise, but it’s highly developed and has a lot going on underneath the surface. Opening track “NHS” takes its information from Sparks and Roxy Music, whereas “Analogarhythm” disperses its Depeche Mode best among sweeping piano trills and clarinet (I think). Final track “St. Anthony” is by far the darkest thing here, but it’s not evil or mad or even particularly explicitly sad. Rather, it’s a propulsive tune that moves tonally and rhythmically with the stride of the listener. That is to say, no matter how crowded the room is when it’s playing, you’ll only ever hear it alone. Museum comes out Oct. 12 via Outer Worlds Records, and on that date you can check it out at superpuppet.bandcamp.com.

GOOD JOB: AthFest Educates, the nonprofit initiative for which the annual music festival and half-marathon raises money, distributed $40,612 in grants recently. The organization reported via a press release that both the festival and road race have been so successful recently, it was able to fund nearly half of the grant requests it received this year. This time around, funds were granted to the UGA Performing Arts Center, Fowler Drive Elementary and Hilsman Middle School. Each grant goes toward multiple, extensive projects that often involve the combined efforts of the receiving institution and volunteers, students, educators and arts professionals. Additionally, continuing education grants went to music teachers from Alps Road, Gaines School Road, Timothy Road and Oglethorpe elementary schools. This is all pretty swell news, and if you spent money on AthFest this year (or any year, really), go ahead and pat yourself on the back for doing your part. For more information, see athfesteducates.org.