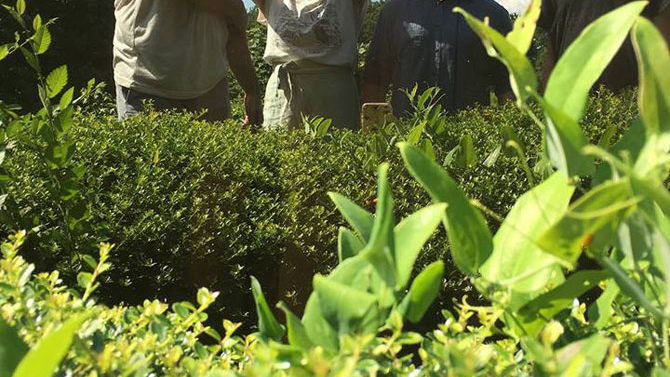 TELL IT TO THE JUDGE: It’s been over a year since any new music was heard from Jianna Justice. That’s been remedied with a five-song EP named The Movies that just came out on Marching Banana Records. It opens up with the shockingly good “Automatic Precision,” which flexes an asymmetrical post-punk muscle heretofore unheard in Justice’s work. Points of reference are a less macho Gang of Four and/or a less hyperkinetic Slits. The closing track, “Slam Dunk,” revisits this spirit but is more Pylon than, say, PIL. The three tracks in the middle are the kind of softer, singer-songwriter-ish material Justice has released before, but there’s a marked sense of experience here—in both fullness of composition and production itself—that’s welcome. I’m particularly partial to the AM Gold of “Release,” but your experience may vary. Anyway, check it out at jiannajustice.bandcamp.com and marchingbanana.bandcamp.com.

YIPPEE, IPPEE, EY, EY, AY, YEY, YEY: Echobass Records has a new release by Razzi King out named Razzin in Space. There have been a couple of other new releases from the label over the past few weeks, but I want to concentrate on this one for now. Its running length of 14 tracks is a bit daunting at first, but eventually rolls through smooth as butter. This is a straight-up house-music record of classic variations—think shades of Frankie Knuckles as filtered through an extremely relaxed Happy Mondays—but it still has some slices of King’s dubby fingerprints. All in all, it’s a fairly ambitious record for both King and the label, so take notice at echobassrecords.bandcamp.com.

NOISE ANNOYS: Athens’ Null Zone record label just released a live set by founder Michael Potter’s ongoing concern, The Electric Nature. Split into two tracks averaging 14-and-a-half minutes each, the live combo for this set was Potter and longtime Athens experimental heads Thom Strickland (Smokedog) and Michael Pierce (Leisure Service). This was recorded almost two years ago at Atlanta’s Mammal Gallery, and it’s titled The Place of Dead Roads. It doesn’t really begin to offer any distinct dynamics until about six minutes into the first track, but after that point, it begins to head into a jazz arrangement with a drone undertone. The second track is, by comparison, a bit brutal and more aggressive by half. Ultimately, though, while this live set is not particularly essential listening, if you’ve got time and enjoy this sort of thing—as I clearly do—then vaya con dios. Check it at nullzone.bandcamp.com.

FROM BOULDER TO BIRMINGHAM: Singer-songwriter and multi-instrumentalist Sylvia Rose Novak came to Athens by way of Alabama. A quick look at her live schedule shows her to be among the hardest-working troubadours currently calling the Classic City home. To wit, she’s playing back-to-back shows Thursday, May 17 at Akademia Brewing Co. and Friday, May 18 at Saucehouse BBQ, and those are only two of tons of shows she’s got lined up in the coming weeks. Plus, she just played two local gigs last week. My point is, simply, if you miss seeing her, it’s your own fault, and most likely your own loss, too. Her songs are dark testaments of the human condition, and she’s the only Athens artist this close to Emmylou Harris in, like, forever. Check her out at facebook.com/sylviarosenovak and sylviarosenovak.com.

PAPAS TAPAS: This is the third time in two weeks I’ve mentioned Marching Banana Records, but the label’s been quiet for so long and is now on kind of a tear. Not familiar? A new compilation, No More Sanitary Art, might be the ticket. Its 15 tracks showcase where the crafty art-pop label is right now. These aren’t exclusive tracks, but they provide a really good taste of the label. Featured artists include Futo, Dead Neighbors, Delorean Gray, Civils, The Pleasure Point, Jianna Justice, Uma’s Thermos and O Key. Do your homework at marchingbanana.bandcamp.com.