Albatross Howls at the Moon, and More Local Music News 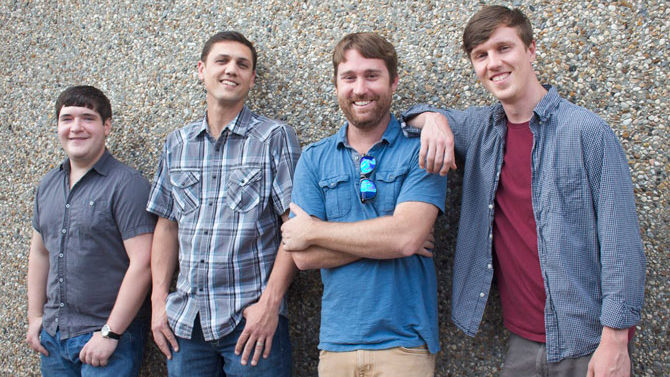 MELLOW FELLOWS: It’s practically inconceivable that a smooth-jazz/light-funk Athens band would name itself Albatross, but then again, we’re the same town that buoyed a jazz band named Squat for several years, so anything is possible. Anyway, these boys just released a new three-track EP named Space Kitchen. The title track is an exploration of the things that make the singer thirsty (taking his medicine in the morning; “chillin’’’ in his Audi) and how he solves these problems like an absolute savage. (He gets himself a glass of water.) The ante is upped even more on the War-lite “Howl at the Moon” and its lyrics of, I dunno, either revenge or resolution. Either way, the “man who took away [the singer’s companion’s] silver spoon” better watch out eventually, but for now, he can relax while the singer “howl[s] at the moon.” Okey dokey. The bonus live track is named “Cassini,” and it’s the most “Jazz Odyssey”-type thing here. And, honestly, at over 12 minutes long, it better damn well be. All in all, I can definitely say this is exceedingly well performed and deliberately composed, but it’s also very desperately looking for a personality that just isn’t there yet. Click over to albatrossathens.bandcamp.com and listen for yourself.

TAKE ME BACK TO DEAR OLD BLIGHTY: By the time you read this, Athens’ Eureka California will be butter-’n’-beans deep into its latest tour of the United Kingdom, and by the time you finish reading this, the group will almost be home. During this stretch, the band brings its power-duo sensibilities to Liverpool, London, Brighton, Exeter, Cardiff, Glasgow, York, Leeds, Nottingham and Manchester. Sometime during all this, they’ll have found time to record a new full-length at Suburban Home studio, where they recorded their album Versus. A cool piece of additional news is the band’s recent signing to the Scopitones label for the UK. In the U.S., and presumably most other territories, they’ll remain on Athens’ HHBTM Records. The band next plays locally at the Pity Party Social Club on Sunday, Nov. 26. For samples, see eurekacalifornia.bandcamp.com, and for more information, see facebook.com/eurekacalifornia.

SEND IN THE CLOWNS: The second annual Rock ’n’ Roll Circus happens Saturday, Nov. 11 at the Caledonia Lounge. Consider yourself forgiven if you don’t remember the first one, because neither do I. At any rate, doors open super early for this eight-band sweat-fest, so if you wanna catch it all, be sure to show up at 6:30 p.m. The lineup this year is The Plague, The Good Looks, The Honey Sliders, The Grawks, Kompromat, The VG Minus, Marses and RCI. It’s only five bucks, so no crybabies and no cheapskates.

ALL YOUR FAVORITE FRUIT: Single-day tickets and three-day passes are now on sale for Camper Van Beethoven’s Camp-In No. 5, which will happen Jan. 18–20 at the 40 Watt Club. This event is all ages, and tickets are $20 for Jan. 18 and $25 each for Jan. 19 and 20. Full passes are $100, and these include a free poster and special performance by David Lowery separate from the other events. The full lineup includes Lowery and Johnny Hickman, Cicada Rhythm, Monks of Doom, Camper Van Beethoven, Robyn Hitchcock, Elf Power, Cracker, Thelma and the Sleaze and The Darnell Boys. For tickets, head to 40watt.com.

OPEN THE FLOODGATES: Longtime Athens musician and scene impresario Mercer West is steadily dumping enormous amounts of material online. As of this moment, there are 14 separate “albums” of music from his Mans Trash project. Though they were largely recorded with traditional instruments (drums, keyboards, bass and guitar), West is also adept as hell with his MIDI skills, so there’s not a whole lot of, say, room sound going on. Most of this sounds like soundtracks for video games that don’t exist, or maybe Muzak for housecleaning. All of it is catchy and ranges from the cleverly sublime to the permanently maddening, but at least there are no lyrics, so you can sing whatever you want. I’ve no idea how old some of this stuff is, or if any of it is recent at all, but it’s all brand new on the web, so there ya go. The sheer volume of this archive is completely impressive, and you can hear it all at manstrash.bandcamp.com.

ONE FOR NOW: There’s exactly one song available to hear from new-ish band Blue Bodies, but it’s pretty darn good in a poor man’s Elvis Costello way. It’s named “Carry On” and is from the group’s forthcoming EP. But that’s all I can tell you for now, because I asked them when it was coming out and they wouldn’t tell me. Drop ’em a line and maybe they’ll tell you! Hear this sweet bruiser of a tune at bluebodies.bandcamp.com.