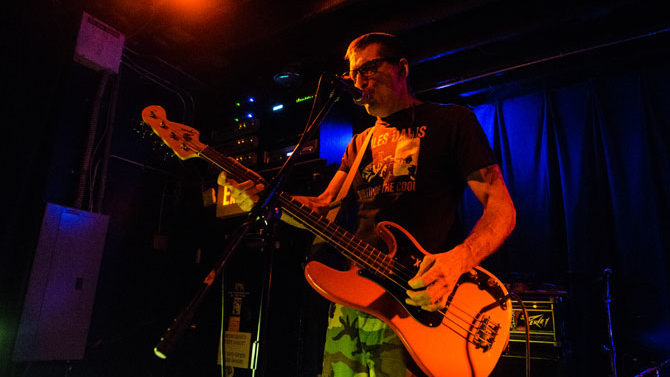 WELL, FINALLY: Heavy, mid-’60s-style psych-rockers The Honey Sliders are set to release the brand new album Welcome this week at the 40 Watt Club. They recorded with engineer Zeke Sayer out at the impossibly cool and utterly rural Gypsy Farm studio. Joel Hatstat laid his mastering hands on it, and now it’s all complete. Hands down, this was worth the wait. The organ swells, the guitars fuzz and grind with just enough of each, and the whole thing is reminiscent of so many bands but no one you could accurately point a finger at. Hell, man, it’s rock and roll in its purest form. It’s loud, brash, tuneful, rude, a bit dumb and kinda clever. Hopefully by the time you read this they’ll have uploaded it to thehoneysliders1.bandcamp.com. If not, just enjoy their album Los Gatos de Tequila, which came out back in 2013.

THAT’S ALL, FOLKS: It’s closing time for the Swing Street Dance Band. The steady provider of salsa and swing music, if you couldn’t tell from the group’s name, is calling it quits. The group will perform one last time at Little Kings Shuffle Club before, uh, shuffling off. This final show happens Wednesday, Aug. 9 from 8:30–10 p.m.

WELL, DANG: It pains me to report that Einschlagen is hanging it up, too, after this week’s Athens Popfest performance at the Georgia Theatre. Seems the group is just losing too many core members to other towns to keep going. So if you care about catching one of the single best groups to come out of Athens in at least the past three years, it goes on at 7 p.m. Friday, Aug. 11. For more info, see facebook.com/einschlagen. There’s a rumor of brand new last-minute tunes going up at einschlagen.bandcamp.com, so check there and see what’s happening.

START THE PIT: Brand-spankin’ new band Apparition released its demo tape a few weeks ago, and it’s appropriately titled Demo. Across seven tracks, the foursome ups the ante on Athens hardcore in huge ways, exploring a solid crossover sound between extreme metal and thrashy hardcore. There’s no way anyone who remembers “crossover” being alternately a slur and mere descriptor could take it as the former. Simply put, there’s no hardcore purist ethos left to betray, so it’s open season for all comers. And Apparition does a pretty damn killer job. Check this out at apparitionathens.bandcamp.com.

PRICK UP YOUR EARS: A triple shot of old-school Athens outsider music will happen at Flicker Theatre & Bar Saturday, Aug. 12. Each featured performer has roots in Athens going back decades. Unus Mundus is the ongoing collapsing-star-pop/freak project from Steve Fitzpatrick (Radio: Tahiti, Houston), Tears for the Dying is the death-rock/dark pop project of Adria Stembridge (Vomit Thrower, The Girl Pool) originally formed in 2003, and rounding out the night is poet Davis Ripley Keller. Honestly, it’s Keller who ties this whole bill together, as he played a key role exposing each of the previous musicians to Athens audiences in the 1990s when he helmed the incredibly missed Club Fred. The show begins at 9 p.m., and you can do your homework at facebook.com/TearsForTheDying and unus-mundus.bandcamp.com.

SEE YA, MAN: Daniel Tanghal, one hell of a good songwriter and an incredibly prolific creator of quality albums, just released the swan song for his time in Athens. As a recent UGA grad, he’s headed off to do, I dunno, other things. In any case, he’s moving away, and while we’ll totally survive, the creative scene will be temporarily poorer for it. Tanghal elevated both the expectations and realizations of indie-pop/fuzz-punk fans over the past several years and did so via wildly understated methods. This new record is titled Every Night I Die in Athens. It features cough-syrupy versions of the previously released “College Degree” and “I Don’t Know,” as well as an actual cough-syrup title, “DXM.” There are seven songs total, including a cover of “Name Your Sound” by Japanese Breakfast. The final track, “Squalene Part 2,” is an ice-cold cry, if not necessarily and explicitly for help, of deep pain, bald-faced self awareness and anxiety. It’s honestly quite shuddering and an acutely conspicuous end to Tanghal’s farewell album. Grab this at danieltanghal.bandcamp.com, and dig deep in his releases going back to 2013 at methwax.bandcamp.com.