‘Panic in the Streets’ Book Needs Your Help, and More Music News 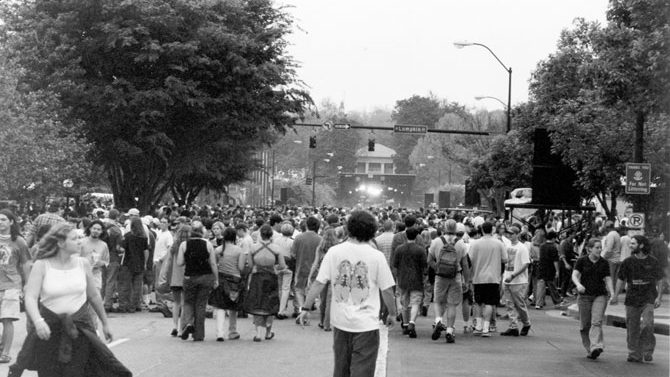 DOUBLE SPACE WRANGLER: Due to the faith and enthusiasm of the University of Georgia Press—specifically, Intellectual Property Manager Jordan Stepp and Director Lisa Bayer—I signed my first book contract last month. We’re coming up on the 20th anniversary of Widespread Panic‘s “Panic in the Streets” show that happened here in April 1998, and this book is about that event. Because the plan is to publish it around the time of the anniversary, the timeline for completion is tight—the manuscript is expected by September. This is where you come in. This type of project is impossible without outside input. If you were at the show, lived in town at the time, worked the show or anywhere around it or just remember what Athens was like 20 years ago, I’m seeking your memories, photos, conversations, tips toward key organizational players, governmental issues, travel stories, happy and/or horror stories, etc. This isn’t a biography of Panic, nor is it a guide to the band. It’s a story about a specific event. Everything gathered will be used for background, fact-checking, follow-up, direct quotation, color, feel and mood. If you’re game to share what you know, email me directly via panicbook98@gmail.com. Also, please pass this info around, and remember it’s not only Panic fans I want to hear from. It’s a Panic story, but it’s also an Athens story. And that’s all of y’all. Thank you in advance for your kind participation. For more information on UGA Press, see ugapress.org.

POP MUZIK: Experimental musician Michael Potter recorded an entire album of tunes a few years ago before he moved to Athens and credited it to his project The Electric Nature. In the ensuing four years, he’s changed the project so much he didn’t feel like these early tunes were of the same cloth. So he’s released this collection under his own name and titled it Garden Portal Almanac. It’s decidedly true this work is more—to use his term—“pop,” but it shows a bit where he was headed with regard to use of space and timing. That said, if you dig Pink Floyd, Animal Collective or Washed Out, this’ll grab you pretty quickly. Personally, I can’t help but hear Billy Squier’s 1982 hit “Everybody Wants You”—and more than a little of Dave Gilmour’s guitar solo from “Comfortably Numb”—all over over Potter’s “Get Out.” None of which is to say this is bad or derivative. Instead, it’s tastily inspired and a rather nice listen. This is out now on cassette via Brooklyn’s Already Dead Tapes. Stream and buy via alreadydeadtapes.bandcamp.com, and enjoy Potter’s other works at theelectricnature.bandcamp.com.

SEASONAL EFFECTIVENESS ORDER: Five Eight’s new album Songs for Saint Jude won’t be released by Austin, TX label Chicken Ranch Records until late July, but pre-orders are being taken now. If you pre-order, you’ll get exclusive sneak tracks and videos for being such a kind and generous person. The album is produced by Cinemechanica’s Mike Albanese, which should be prima facie evidence of its rockitude, but any Five Eight fan worth his or her salt would know this already. So, sailor, are you salty? If so, head to pledgemusic.com/projects/fiveeightsaintjude and do the thing. And don’t miss Five Eight at the Flagpole Athens Music Awards Thursday, June 22 at the Morton Theatre.

DADS-N-GRADS: Future Lives, the creative outlet for former King of Prussia dude Brandon Taj Hanick, has a new album coming out named Mansions. The other folks on board are Nick Robbins (Velveteen Pink), Sarah Robbins, Benji Barton (Boulevard), Cameron Steuart (Magpie String Band) and John Neff (everyone). They recorded it over at The Glow Recording Studio with engineer Jesse Mangum and mixed and mastered it with needs-no-introduction John Keane. The whole vibe of the album is one of a band trying very hard to wrap its arms around as wide a swath of folk, country and gentle, acoustic-based indie pop as possible. The faster songs (“California Vibe,” “St. John’s Fair”) are much better than the slower ones (“Continental Drift Divide,” “The Strangest Dreams”), but mostly it’s all super slippery. I can’t find any distinct personality or statement here. It feels more like a demo than an album, but at 12 tracks long I suppose it’s the latter. This kind of stuff makes millions of dollars for some folks, so it might as well be these guys. You know, shop local and all. The band next plays live in Athens June 23 for AthFest at Flicker Theatre & Bar along with Paul McHugh, Boycycle and Hunger Anthem. Grab the album at futurelives.bandcamp.com when it comes out June 27.