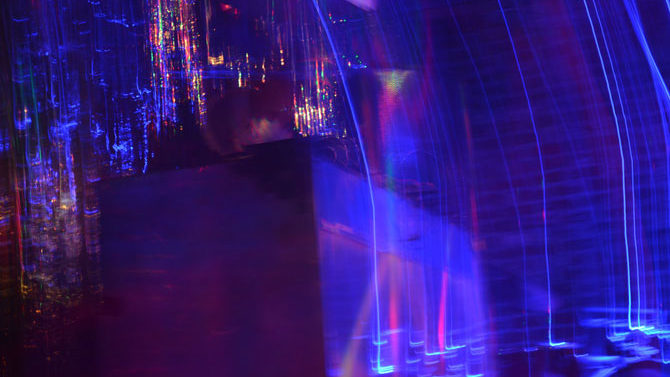 GET UP, SIT BACK DOWN: Donald Whitehead (Future Ape Tapes) tore his Achilles tendon playing basketball back in April. Even hearing about this made me wince with sympathy pains, so I can’t imagine how painful it was for him. At any rate, he’s used his time during recovery to make a new full-length record. Released as his solo project Space Brother, the album is named Achilles Heal (get it?) and is 10 tracks long. It was easy for me to assume that, due to the nature of the recording and the incident that led to it, this work would be fairly meditative. Well, that’s what I get for assuming. It’s full of bouncy beats (check the almost-squelch of opening track “Voyager”) and slower-tempo plays on dark-psych EBM (electronic body music), and in many ways it’s a nice counterpoint to the not entirely post-hip-hop, but definitely wide-open experimentalism of the Apes. Dig it at spacebrother.bandcamp.com.

NU TUNE: Blue Blood just released a debut single, “My Blood,” from the upcoming album Pretty Wars. It comes courtesy of local label Laser Brains. The song is markedly different from the deep mood-setting songs we’ve heard from Blue Blood in the past, emphasizing a modern-day chooglin’ rhythm that’s way less CCR and way more J. Geils Band (including a deadass Geils-ish whistling riff). Blue Blood next plays locally on the Georgia Theatre Rooftop Tuesday, May 30. The album will officially be released June 23, just in time for Blue Blood’s AthFest show the same night at Little Kings Shuffle Club. Check it out over at facebook.com/bluebloodtheband.

OK: Musician, songwriter and UGA Music Business Program student Andrew Gorham spent over a year as an intern with engineer Joel Hatstat. Taking inspiration from sessions he observed, he set out to compose and perform a set of songs himself, adding only a bass player, Ben Crawford. The result is Gorham’s new pop-oriented EP, Retrovisor. It’s four tracks long and, I dunno, I guess it’s fine as a demo. I know it was a ton of work to separately track and play these, which is applauded, but they’re not terribly complete, compositionally speaking. I can’t make much of the lyrics, and the politically oriented “The Fuck Do I Say?” is so confusing in its direction I just tuned out. The best track by far is opener “Catch & Release,” and the best part of that is the piano. There’s not much else to say about the EP, but you can check it out at andrewgorham.bandcamp.com.

BEAR WITH ME: Bear Hollow Zoo at Memorial Park will host a neat little family-friendly event Sunday, May 28 dubbed Zoograss. It begins at 1 p.m. and features live music from Athens’ bluegrass folks Pickled Holler along with friends of the band. Who? No idea! But it’s free and should sound just fine, and any reason to visit our local zoo is a good reason. For more information, see facebook.com/PickledHoller.

FIVE FOR FIGHTING: Athens rapper Caulfield released a new EP a couple of weeks ago named Under the Influence. The five tracks feature a few solid, highly selective guest verses from notables like Dictator, Squalle, Trvy and Son Zoo. It took me a couple of times through to grab the groove of this EP, but once I was in it all clicked. While I’m not crazy about the trap beat of the title track, things coalesce nicely on the tuneful, mid-tempo “They Don’t Know,” which features the above-mentioned Dictator and Squalle. The other obvious single is “2 Legit,” featuring Son Zoo. Check it out at soundcloud.com/mynameiscaulfield.