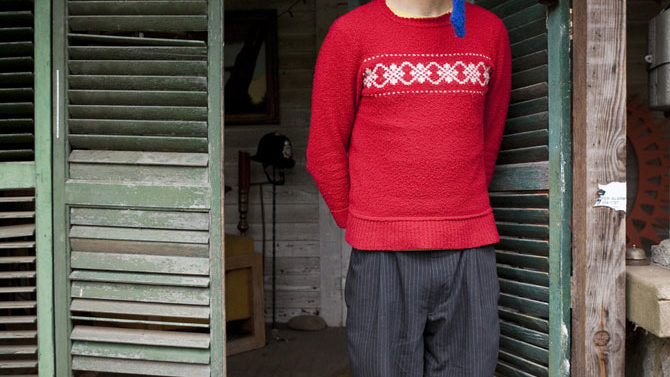 POTLUCK: Photographer Jason Thrasher has already had success with his “Athens Potluck” project, including exhibitions at Hartsfield-Jackson International Airport and the Georgia Theatre. The central conceit of his series of local-music photos is that each person photographed suggested the next subject, and so on. Now, thanks to his partnering with Athens’ Deeds Publishing, it’ll hopefully see hardback form. There’s an Indiegogo fundraising effort afoot to launch the book, described as a “stream-of-consciousness journey through the music scene of Athens, GA,” with a goal of $30,000. While any amount is accepted, donors begin receiving premiums at the $10 level (one full-color postcard), and there are demarcated levels all the way up to $10,000 (20 autographed books, party at your house and more). The suggested level is $60, for which you’ll receive a signed book and three postcards. Athens Potluck is expected to be published in October. See deedspublishing.com for more information on the publisher.

TEA FOR TWO: Athens’ least self-promotional DJ and composer, murk daddy flex, aka Terence Chiyezhan, will release a new EP and play it in its entirety on Tuesday, Apr. 4 at the Athens Institute for Contemporary Art (ATHICA). Actually, there’s a whole affair built around this, including a performance by Austin, TX’s fairly brutal industrial/sample-based mind control machine Street Sects. Presented by the “Grayson High School Tea Club” and billed as the “2017 Southeastern Curry Expo and Trade Show,” there’s also going to be a vegan potluck, and you’re advised to bring your own mug to sample different teas. The potluck is at 8 p.m., music starts at 9, and a brand new day begins at midnight, so what do you have to lose?

LEFT OF THE DIAL: WUGA 91.7 FM—which recently switched its secondary frequency from 97.9 to 94.5 FM—and Visit Athens will present a live taping of popular public-radio show “eTown” at the Georgia Theatre Friday, Apr. 7. Tickets are on sale now and cost $28. Featured acts for this event are Cicada Rhythm, Florida soul and blues singer-songwriter JJ Grey and hosts Nick and Helen Forster playing with the show’s house band, the eTones. The two-hour taping will be edited to one hour for broadcast. During the show, eTown will present an “eChievement award” to “one extraordinary Athens individual who is making a positive difference in their community.” eTown is based out of Boulder, CO, and began its run in 1991. For more information see etown.org, and for tickets head to georgiatheatre.com.

WE DON’T CAUSE TROUBLE, WE DON’T BOTHER NOBODY: Dorothy Gilchrist, aka DJ Lodi Dodi, just released her newest mixtape, Classic City Sh*t, with the goal of promoting artists from the UGA and Athens communities. As none of the 22 tracks have identifiers in the credits, I can’t speak to who represents where, with the sole exception of Squalle, whom we all already know. That said, there are some gems on this. Super standout tracks include two from the utterly smooth-voiced Sam Hartfyre, the refreshingly honest Dope Diana (who actually does shout out that she’s from Atlanta) and the down-home and downbeat Javae. There’s no real underlying theme or mood to the mix, and it all kinda falls right in the middle. You won’t bang this outta your car or anything, but it’s fine for parties. Check it out at spinrilla.com/mixtapes/dj-lodi-dodi-classic-city-shit, and listen to more Lodi Dodi stuff at soundcloud.com/djloddidoddi.

HOMECOMING: Athens’ newest live promotion undertaking False Idol will bring Captured Tracks recording dude Axxa/Abraxas (aka UGA graduate Ben Asbury) back to town Saturday, Apr. 1 at the Caledonia Lounge. Also on the bill this night are Juan de Fuca and Atlanta’s Fantasy Guys. Axxa/Abraxas’ self-titled label debut in 2014 showed a nicely coalesced version of Asbury’s psych-indie-pop sound, and it has been a good while since the band has been around here. So go out for once, already, would ya?