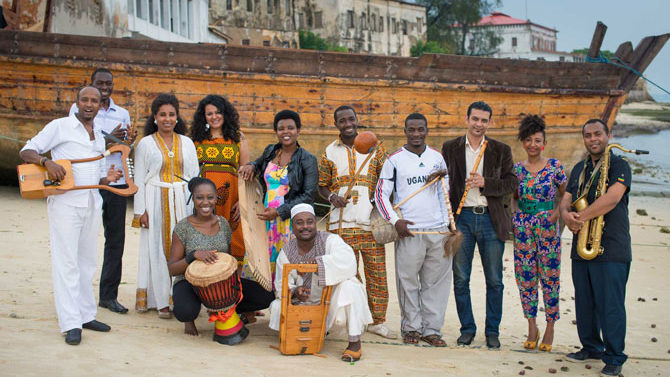 SIT RIGHT DOWN: Engineer Jim Hawkins will host the multifaceted advocacy, sustainability and musical organization The Nile Project—whose work concerns the land, people and economy along the 4,000-mile Nile River—at his studio, Studio 1093, on Sunday, Jan. 22. The event, which will run from 4–6 p.m., will include an interview and performance and is being recorded for future broadcast. This show is part of the ongoing series Music on the Boulevard, and tickets are $10. Hawkins, whose own unimpeachable resume can be read at electroacoustics.com, has established musicontheboulevard.com for your convenience in grabbing these extremely limited tickets. For more information, check out that site or give him a call at 706-340-1283. To learn about The Nile Project, see nileproject.org.

FUN IN THE SUN: Because it’s still winter in our hearts and minds, The Powder Room went out for a string of Florida road shows this week. The noise-rock trio hit Jacksonville, Gainesville, Melbourne, Miami and St. Petersburg. In other news, longtime bassist Bubba McDonald left the band amicably last month, and new bassist Curtis Callis has filled the position. His joining also reportedly drops the average age of the group from 39 to approximately 26. The band’s most recent LP, Lucky, was released by Learning Curve Records last August. Follow along over at  facebook.com/thepowderroomathens, and listen in at thepowderroom.bandcamp.com.

FIVE FOR FIGHTING: Drew Kirby (Mothers, New Wives) just released a new EP from his as-time-permits recording project Civils. It’s got five tracks, and comes courtesy of Kirby’s Marching Banana Records. In the album notes, Kirby says it was originally “primarily concerned with distance and leaving” and written largely on the road, but then “morphed” into this collection. Honestly, though, that’s exactly what this record feels like. It sounds like that half-dizzy, post-euphoria exhaustion that hits hard after traveling and being awake for days. It comes together at its most traditionally musical point for the song “Over Distance, Over Light.” The other four tracks have a brittle, taped-together quality that are essential for the EP’s overall aesthetic but most likely won’t receive repeated listens. Check it out at civils.bandcamp.com.

IT MIGHT GET LOUD: Longtime Athens rocker Zack Hembree (Music Hates You, Grim Pickins & the Bastard Congregation, For the Vulture, Tarnation, Stone Mountain Freeway) has been a little quiet lately, but it looks like things are about to get loud again. He’s got a new ensemble named Toro that’s working on a debut EP and will hit the stage mid-to-late February. As of this writing, there’s one track, “Bury Me Then Flee,” that you can check out at facebook.com/TOROband. If the final EP continues on the same path, it’s gonna be a face-melter. In related news, Hembree and bandmate Pablo Davila will perform as a duo named—wait for it—Hembree & Davila, opening for Scott Kelly (Neurosis, Tribes of Neurot, Blood and Time, Shrinebuilder) when he plays a special acoustic show in Atlanta on Feb. 22 at Smith’s Olde Bar.

AHOY: With its third release since September, Future Ape Tapes seems to be on a roll that’s unprecedented in its 11-year history. This newest two-track album, with a running time of 53 minutes, is titled Deep Leaks. It appears to be inspired by E. E. Cummings’ poem “The Eagle,” and, like several recordings from the group, is best experienced with headphones. Maybe I’m being unduly influenced by its title and track names (“Lake One” and “Lake Two”), but there does seem to be something watery about this. Both tracks are pretty linear, and there’s a musicality here that supersedes its obvious nods to noise and disorder. Overall, it’s more meditation than menace, and you can check it out at futureapetapes.bandcamp.com.

HEADIN’ OUT TO THE HIGHWAY: Athens record vendor The Record Booth is moving from its longtime location at Eastside vintage market Weekend A’fair Antiques and setting up shop at Lexington Vintage (1743 Lexington Road, entrance in back). The move won’t happen until the end of this month, though, so use the current location for now. Store hours for the new shop are Tuesday through Friday, 9:30 a.m.–5:30 p.m., and Saturday, 10 a.m.–5 p.m. The exact moving date should be published soon at facebook.com/therecordbooth, and you can check out owner Alan Ross’ record-buying website at olderecord.wix.com/recordbooth. If neither of those suits your inquiry, just drop him a line at olderecord@yahoo.com.