Kwazymoto Ups Its Game With On Mount Rennie 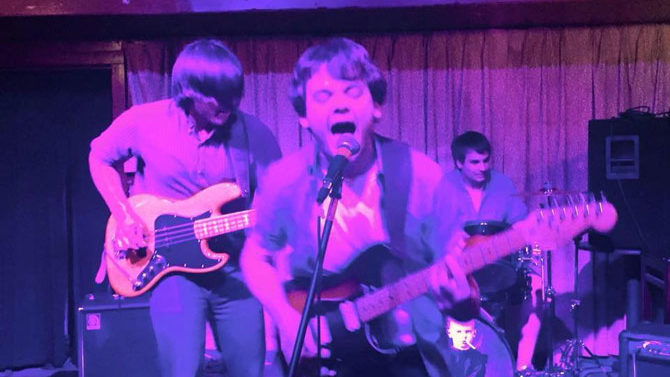 TWO STEPS FORWARD: The clever garage-punks in Kwazymoto have upped their already high game with a new album named On Mount Rennie. It came out two weeks ago, and it’s a total smoker. I don’t know if Athens has gotten something up in its water lately, but this is the second record in as many weeks to recall the early 1980s Los Angeles punk scene without aping it. Specifically, this record brings back the brief, shining slice of a moment when creativity was encouraged, and the scene was not yet codified. It’s got its 4/4 punk speed, for sure, but also an awful lot of weirdo darkness bordering on the post-proto-goth of 45 Grave. Everything here is composed of simply constructed pieces that coalesce into blistering rawness (“Beseechers”) and shambolic paranoid prayers (“My Hot & Bothered Self”), and it all kinda goes back and forth just like that. The band recorded this with engineer Zeke Sayer out at Sayer’s Gypsy Farm Studio. The release show for this record has come and gone, but you can still throw this in your ears via kwazymoto.bandcamp.com, and meet the boys over at facebook.com/kwazymot0.

JUST THIS SIDE OF LOCAL: Former Athenian Dave Nelson (trombone, looper) and current Athenian Marlon Patton (drums, Moog bass pedals—which are not like guitar pedals; they are like piano pedals attached to a synth) have a duo named Nelson Patton. They’re releasing an album named Along the Way, which features the duo joined on four tracks by improvisational poetry from Atlanta artist and musician Lonnie Holley. The music itself is reportedly drawn from improvisational performances, too. Those are the hard facts. Here are some soft facts: This album is enjoyable in a way that suggests it’s jazz for people who don’t really listen to jazz. Further, it is to experimental music what Morphine was to rock music—that is, a toe-depth exploration into genres casual listeners may have already rejected or not yet explored. For the most part, it’s a pretty groovy record, and it shows some true sparkling creativity on tracks like the upbeat “Kerhonkson,” the wet-streets-at-night vibe of “Blue Stone” and the pause-worthy gorgeous title track. Along the Way is set to be released Oct. 14. See nelsonpatton.com for more information.

NOW FEAR THIS: Michael Potter just released a jaw-droppingly cool compilation via his Null Zone label. It’s titled Exterminate All (Rational) Music, and features a whole bunch of experimental sounds and artists from all over the world, from Athens to Germany. Of particular interest is a medley of four tracks from former Athenian and legendary avant-garde musician Tom Smith. This piece, named “Forbidden to the Profane: a Chronological Collage,” joins pieces from his groups Boat Of, Peach of Immortality, OHNE and To Live and Shave in L.A., and spans the years 1982–2015. Other artists of note include Athens expat Alec Livaditis, the excruciating noise terror of Clang Quartet (ex-Geezer Lake), Smokedog, Future Ape Tapes, Potter’s own The Electric Nature, and New York’s Sunwatchers, which features ex-Athenians Jim McHugh, Jason Robira and Jeff Tobias. Fair warning: There’s been a veritable truckload of noise and experimental stuff released in or near Athens over the past few years, and a lot of this collection is seriously at the top of the brutality pile. Tread carefully. Or, you know, jump right in at nullzone.bandcamp.com. I did.

LICENSED TO DRIVE: Musicians’ resource center Nuçi’s Space celebrates its 16th anniversary Friday, Oct. 7. A celebratory event is happening at the space itself that same day from 5:30–9 p.m., and will feature a live performance from 2016 Athens Business Rocks winner Punchline, silent and live auctions with rare music memorabilia and a book signing by Space founder Linda Phillips. Thank you, Nuçi’s Space, for all the good you do! For more information, see nuci.org.

BUY HERE NOW: There’s a benefit yard sale happening Saturday, Oct. 8 for Jenny Woodward, who has been suffering from symptoms and associated complications of Lyme disease and babesiosis since 2012. The sale takes place at 135 S. Poplar St. between 7 a.m.–1 p.m., and if you’d like to donate any items for sale, you may take them to that same address on Oct. 7 between 7 a.m.–8 p.m. If you’re unable to make the sale, you can support Woodward financially by purchasing a CD by her band, Like Totally!, through cdbaby.com/cd/liketotally1. These afflictions have made it impossible for Woodward to work, and every penny counts. Please search youcaring.com for more information on direct support.