Dana Swimmer Grows Up with Glacier 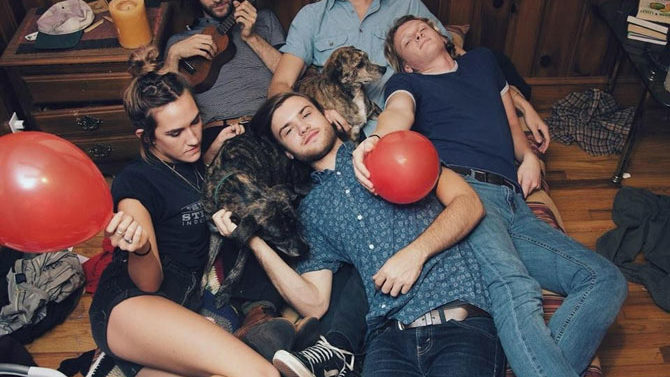 START SWIMMIN’: Party-rockin’ local pop band Dana Swimmer released its new album earlier this month. It’s titled Glacier, and is evidence of the group’s honing of its composition style since 2013’s Veloce. This time around, Dana Swimmer is more focused on guitar work and propagating its rhythm that way, as opposed to just throwing whatever against the wall and seeing what sticks. The result is a largely cohesive album with only a couple of sore spots (namely “Starling,” which showcases Jack Blauvelt’s naturally modulated vocals way too much, and “Happy Too,” which has this signature guitar line that just sounds upside down). Overall, it’s a huge step up for the band, which has been a favorite of live audiences pretty much since its inception. Check it out at danaswimmerglacier.bandcamp.com.

A VIEW FROM THE OUTSIDE: The Classic City Fringe Festival happens this week from Thursday, Oct. 22–Saturday, Oct. 25. The multifaceted event incorporates events ranging from the fully avant-garde to family-friendly stuff. Its various elements include “theater, dance/movement, music, video/film, performance art, poetry, puppetry, comedy, improv, art installations, circus and cabaret, burlesque and vaudeville and other performance-based art.” Events take place at several venues, including The World Famous, Live Wire, Rubber Soul, Flicker Theatre & Bar, Lumpkin Street Station, JOKER JOKER Gallery and Max. Unique among Athens events is that no tickets will be sold at the door of any venue. You must have pre-purchased passes (known as “Fringe Bucks”) to enter, which can be purchased only in advance at a Fringe Buck box office set up during the event, or buy a full-festival pass online. Fringe Bucks may also be used during the Moonlight Gypsy Market, with which the CCFF is partnering. Personally, I love the idea of planning ahead and hope this is successful. Athens does love to lollygag, though, so fingers are crossed. For more information and the full schedule, see our preview feature.

SUNNY AFTERNOON: Groundbreaking Atlanta artist Kevin Dunn (The Fans, et al), who by all rights should have been as famous as Howard Jones, or even Howard Devoto, for that matter, will play as a duo with Athens drummer John Norris (Crazy Hoarse) on Sunday, Nov. 1 at Ted’s Most Best. Showtime is 5 p.m. Although Dunn’s discography is scattered all over the place, his newest material is available via kevindunn.bandcamp.com, and there was a great compilation named No Great Lost: Songs, 1979–1985 that came out via Casa Nueva Records in 2010 if you can still find it.

WINTER PAGEANT: Songwriter and guitarist Jianna Justice recorded a five-song demo/EP earlier this year under her nom de plume Penny Lame, and it’s pretty damn good. Once you know Party Songs was recorded in bathrooms via a laptop with GarageBand, it’ll sound that way, but it really doesn’t make any difference. Stylistically, both the music and its graphic representation owe quite a bit to early-to-mid-‘90s twee and indie pop, but there’s thankfully none of the persistent (read: pretentious) obsessiveness over childhood, deliberate amateurishness or nostalgic insecurity. If anything, it’s a clearly executed document of what it must be like to be a 20s-ish woman navigating the world of friendship, family and dating, and instead of being wise beyond its years, it’s wise within them. The lyrics of self-doubt and confusion don’t deny this, as each is part and parcel of such self-awareness. Although it’s not for everybody—nothing is—“Mom and Dad” should hit home no matter what your age. Word on the street is a new full-length album is on the way. Listen to Party Songs over at pennylame.bandcamp.com.

FOUND SOUND: Those looking to grab a new fix of synth and electro should head straight to the Bandcamp page for Echo Constant and check out musician Ryan Rudder’s new two-track release, Inside/Animal. The vocals are a little buried, but I found that after several listens, I actually liked this aspect. “Inside” is a maze of Yaz-style sound that’s ice-cold, where “Animal” has a lot more warmth and a pretty prominent squelch rhythm. This actually came out back in July, and Rudder put out another release, a self-titled full-length album, in February. That record is largely sample-based, but features Rudder’s drum tracks and vocals. It’s a jarring listen at times, and has some pretty wild mood swings about it. Back in 2012, he released an entirely sample-based EP named The Machine, a cool little record where I found myself trying to identify the sources it used. Eventually, I gave up, because it felt like staring at a painting too intently, and I just enjoyed it. All three are worth the time they take, so give ’em some at echoconstant.bandcamp.com.

OXFORD ATHENIAN: The seminal literary magazine Oxford American‘s annual Southern music issue and CD, coming out Dec. 1, is a must-have for any music fan any year, but this year in particular. It’s focused on Georgia and will prominently feature a number of Athens artists, according to Lisa Love, director of music marketing and development for the Georgia Economic Development Department. Love spent a week here with editor-in-chief Roger Hodge, touring the Orange Twin compound, among other things. OA will host a launch party Dec. 9 at the Georgia Theatre. [Blake Aued]