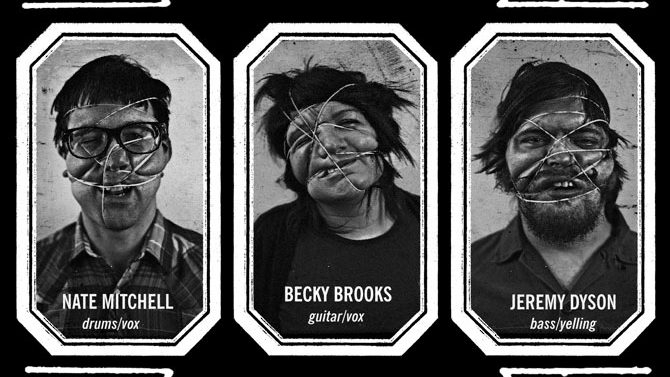 Ah, well, if it’s not the heat, it’s the rain, right? Look, the sky may be giving us our weirdest summer on record, but until it starts spilling snow on the ground, we’re just gonna have to keep putting one foot in front of the other and get on with the business of our scene. First step? Checking out this week’s essential news. It’s all right there below, just waiting for ya…

Two For Flinching: The pre-order season has opened for the new LP from local vulgo-fave garage-rockers Cars Can Be Blue. Titled Trace the Tension, the album comes courtesy of the band’s longtime home HHBTM Records. The plain ol’ LP is a mere $12, but the deluxe package is $22, and includes the LP, a sticker, a button, a tote bag and a live cassette recording. Presumably, the live recording is of CCBB, but this is exactly the type of situation where I could see them pulling a switcheroo and giving you a tape of, say, people babbling to themselves at the bus station or something. Either way, the LPs will ship in August. In other CCBB news, the band heads back to the UK—this time with all paperwork in order—July 24–Aug. 6. Although there should be several memorable shows, the highlight so far seems to be the band’s appearance at renowned Derbyshire indie festival Indietracks. Label mates Tunabunny are in the UK at the same time, and will also make an appearance at this event. To get in on the LP action, head to hhbtm.com.

Vibes And Stuff: OK, damn if murk daddy flex (Terence Chiyezhan) isn’t the best DJ/producer to spring up in Athens in a good while. Yeah, we’ve mentioned him before in these hallowed pages, but I’ve been playing his new release, MDF, for basically a week, and I’ve just gotta tell y’all to head to Bandcamp and stream or download it. You can grab it for free or throw some bucks toward the man. This is his second release this year, and sixth overall, if you count demos and early tracks. Although ostensibly promoted simply as “instrumental hip hop,” the album is at least a couple of heads above Chiyezhan’s previous releases—MDF stretches the parameters of the genre into sublime territories. Keep up with him via facebook.com/MurkDaddyFlex. But whatever you do, listen.

Find It: There are a few bands in town that I always wish I could see live more often, but things don’t always work out. Among these is Brothers. I first got hooked on their pulsating indie-jangle last summer and am tickled to mention the group’s new EP, Street Names. Most everything on the five-track record was recorded last year at Chase Park Transduction but only reached the public realm a couple of weeks ago. There’s probably a life lesson around here somewhere about how you shouldn’t name your band something that is utterly non-Internet-searchable, but hell, I also don’t think that should run your life, so never mind. For your convenience, though, I’ll point you toward brothersathens.bandcamp.com for the music, and facebook.com/brothersathens for more information.

All Day Dreamtime: I know what you’re thinking. You’re asking yourself, “Is he really going to mention Bandcamp for the third paragraph in a row?” And the answer is, yes, I am. So keep your browser roughly where it is and check out the debut album from Glasscrafts. It’s titled As in See Through Ships, and if you’ve been keeping up with all the Steven Trimmer tracks I’ve pointed you to over these past few months, you’ll dig it the most. The band pretty much rose on its own after its members shed the on-again/off-again skin of Grass Giraffes—a project which seems, regretfully, to be totally buried now—and the 19 (!) songs on this debut are a total joy to hear. Composed of Trimmer, Robby Casso, Jesse Stinnard and Ted Kuhn, Glasscrafts specializes in non-specific, guitar-based pop that feels as un-self-conscious as it does instantaneous. Follow along at facebook.com/Glasscraftsmusic.

It’s About Time: It’s been literally over two years since dream-pop maestro Tommy Wedge, via his ongoing project, Wedge, has placed his music on a stage. That grievance is being redressed Friday, July 12 at the Caledonia Lounge. Also on the bill this night are Incendiaries and Columbia, SC’s Pan. Wedge’s most recent release was the sunshine-tinged These Thieves EP, which dropped in October of 2012. But the catalog goes back to 2007, and since everything is available at wedge.bandcamp.com (again!), you’d do just fine to spend the week catching up. The most immediate comparisons are the usual suspects—Cocteau Twins, et al.—but that’s really a holdover from last decade, because Wedge’s music is notably lighter and breezier now. You can read a painfully overwritten biography of the project, but I’d encourage you to just skip ahead to the music and keep on the band to play more by bugging them at facebook.com/wedgemusic.

Got a local music tip? Email to threatsandpromises@flagpole.com.