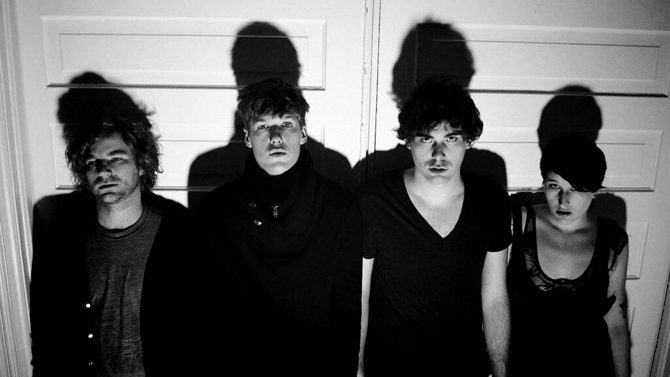 The Vinyl Frontier: Classic guitar-pop long-distance runners The Vinyl Strangers have been gigging more regularly recently after a six-month break, during which guitarist Reid Howland celebrated his newest release: a baby daughter. The group is currently working up a third full-length album to be recorded with engineer Matt Yelton at Full Moon Studio later this spring, and has recently done a few out-of-town dates. The band’s next Athens show is Monday, Apr. 8 at the Melting Point pavilion, where it will perform as part of the Hoot, the monthly show produced by the Athens Folk Music & Dance Society, and shares the bill with The Solstice Sisters, Bear on the Square, Paul Lombard and host Susan Staley. It’s free and runs from 8-10 p.m. In other news, Strangers member Joe Guerzo is working on putting together a tribute band combining his twin adoration for The Archies and the FX cartoon “Archer,” named The Sterling Archies. He reports that they’re “still looking for a Betty and Veronica.” If this is your bag, drop him a line at vinylstrangers@yahoo.com.

Into the Light: After several years, a handful of releases and a few lineup configurations, I feel confident saying that Twin Tigers finally sounds like itself. That is, all the fuzzy doom and shadowy shoegaze—popular brands that earmarked the group’s past—have receded from direct influence into mere inspiration. The group’s most recent Athens shows easily have been the most satisfying ones I’ve seen from it in years. All of which leads me to telling you that Twin Tigers is releasing a new, full-length LP on Apr. 9. It’s titled Death Wish and comes courtesy of Brooklyn label Old Flame Records, which also released the group’s 2010 album, Gray Waves. Twin Tigers will kick off a five-week spring tour with a show at the Caledonia Lounge on Saturday, Apr. 6. After this run of shows—up the East Coast, through the Midwest and deep South—the band has plans for another outing with Dead Confederate. Watch this space for updates. For all other info, see thetwintigers.com.

Everyone Is on His Own: One of my favorite diamonds in the rough of Athens music, Junker, just released its album Somewhere in These Transmissions for free via junkerband.bandcamp.com. Led by songwriter Stephen Brooks, Junker trades in apocalyptic visions and down-home emptiness so real you can almost see the footprints across its back. I’d hesitate to call this simply Americana, as it’s really humana-cana, if you will. Everything on the record was done live, except for some organ parts played by Derek Almstead, who can be forgiven for tracking it later, because a man can’t do everything at once. Brooks reports that he already has another album’s worth of songs under his belt for Junker’s next record, tentatively titled Monsooner. Follow along at facebook.com/junkerband.

Preach!: Although not really nailed to the Athens music scene anymore, the transsexual spoken word machine that is Athens Boys Choir released a new album back in January titled Heartstrings and Hamstrings. The performer known simply as Katz is the act’s sole member, and has been for so long that his name and Athens Boys Choir are practically interchangeable. The new album features 15 new tracks of his raw (politically, emotionally and otherwise) word-smithery. There’s minimal backing on most of the tracks, but a new remix of the Choir’s standard dance jam “Fagette” closes the whole thing out on a high note. Katz is seemingly always on tour but rarely plays locally—the closest to Athens he will perform in the near future is at UNC-Asheville on Friday, Apr. 5. But you can grab the new album over at athensboyschoir.bandcamp.com and stay up to date at facebook.com/AthensBoysChoirYeah.

Mystery Date: Athens Montessori will celebrate its 35th anniversary with its annual AMS Rocks musical event and auction Saturday, Apr. 6. It runs from 5–10 p.m. at St. Gregory’s Episcopal Church (3195 Barnett Shoals Rd.), with local musicians playing in the background during the silent auction portion early on and then doing proper performances between 7 & 8 p.m. The tunes take a break for the live-auction portion—hosted by local folk artist Cap Man—and the night ends with a dance party spun by DJ Brant Rackley. There are reportedly four local acts performing, but zero have been announced. So, hold your breath! Auction items include packages from R.E.M., Drive-By Truckers, AthFest, a hand-painted guitar courtesy of artist Jamie Calkin and instrument donor Megan Adams and many more non-musical items. Individual tickets are $20—remember, this is a fundraiser—and special patron packages are priced appropriately higher. For more information, see amsrocks.org.

Read ‘Em and Weep: The next installment of the literature and music series New Town Revue, hosted by Avid Bookshop (493 Prince Ave.), will happen Friday, Apr. 5 and feature writer John Pence, poet Julia Maher and songwriter Jacob Morris. With his newest album, Moths—a title he also performs under, so forgive yourself if this is confusing—released a scant few months ago via Cloud Recordings, Morris is developing a growing audience with his gentle, under-emphasized vocals and alternately salt-of-the-earth/angel-from-heaven compositions. It all starts at 6:30 p.m., so don’t let the sun catch you crying if you’re late.