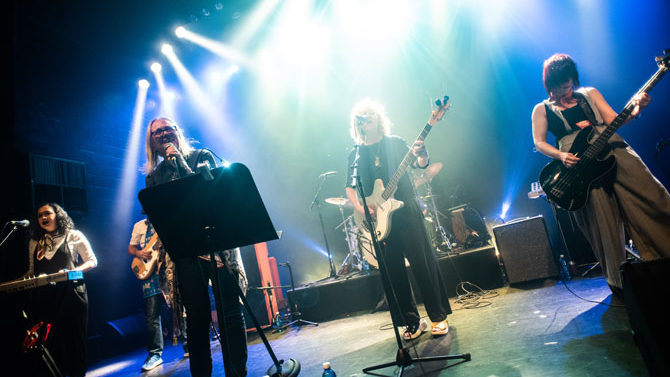 Love Tractor and Oh-OK are two bands inextricably linked by time and space—meaning, of course, that they both played hands-on roles in shaping Athens’ hallowed alternative rock scene at the dawn of the 1980s. Both groups shared practice spaces and stages and even brandished the mark of Atlanta’s DB Recs alongside the B-52s, Pylon and the Method Actors. But despite coming of age amid the same college town music scene, stylistically speaking, their sounds could not be more disparate.

There was a high cultural premium placed on individuality in those days, which propelled Athens’ music scene in intangible ways. The meandering rural melodies and atmospheric guitar textures of Love Tractor’s 1980 self-titled debut stand wholly apart from the stripped-down blasts of one and two-minute post-punk from Oh-OK’s 1982 Wow Mini Album. But it was within these differences that they found common ground.

More importantly, says Oh-OK’s bass player and songwriter Lynda Stipe, “Beyond everything else, we were all friends. Sure, everybody wanted to party and stuff, but it was the mutual support that made that scene happen.”

Everyone knows Athens’ classic sound when they hear the regional drawl exuding from within every rhythm and note by the commercially successful acts of the era: R.E.M., Pylon and the B-52s. But it was the musical variety flourishing amid these groups that became a defining trait.

“That’s the sort of thing that happens when you have kids from all over coming to town to attend the really great art school in Athens,” says Love Tractor’s co-founder and bass player, Armistead Wellford. “People pushed each other and encouraged each other to create something that was truly different.”

It was an environment that encouraged B-52s guitarist Ricky Wilson to flesh out his blend of alternately tuned surf-rock kerrang and no-wave abandon using only four strings, or Pylon bassist Michael Lachowski to develop his own music vocabulary using graph paper to visually compose his rhythms. “It was all very ebullient,” Stipe says, recalling how she developed her own visual writing style, similar to Lachowski, while plucking bass strings in her parents’ living room.

Stipe, who is the younger sister of R.E.M. vocalist Michael Stipe, goes on to say, “A lot of the music of the time sounds very unschooled, but that’s not to say that it’s not proficient—a lot of it was extremely proficient.”

The propulsive, minimal pop of early Oh-OK numbers such as “Lilting,” “Playtime” and “Choukoutien,” she says, were born out of diving into the music with no formal training. Still, she developed a singularly catchy sound that resonated with her fellow musicians, including Love Tractor’s Wellford.

“I never quoted what Lynda was doing with my own playing—like, in Love Tractor’s ‘Fat Birds,’  you can hear it was inspired by the bass from Pylon’s ‘Volume,’ but it shows we were still trying to sound different,” Wellford says. “When I heard Lynda’s bass playing, it was exciting. It compelled me to pick it up and run with it from there.”

On Jan. 17, Love Tractor and Oh-OK once again share the stage at the 40 Watt. For this show, Love Tractor co-founders Wellford and guitarists Mark Cline and Mike Richmond are joined by former Glands drummer Joe Rowe and guitarist Doug Stanley. Andrew Carter will also join in on songs from the group’s 1987 LP This Ain’t No Outer Space Ship and ’88’s Themes From Venus. Expect a few guest appearances, as well, by the likes of former R.E.M. drummer Bill Berry and his son Owen, who play guitar on the group’s rustic cover of Kraftwerk’s “Neon Lights.”

“Bill has been taking care of us,” Wellford says. “He’s taken us under his wing. We’ve been practicing at his place outside of town, and he’s encouraging us to keep it together and to put on a proper Love Tractor show.”

Love Tractor is also working on a reissue of its self-titled debut LP, with plans for more music to follow.

The current version of Oh-OK finds original members Stipe and vocalist Linda Hopper reuniting with an expanded lineup featuring members of Stipe’s band Flash to Bang Time, as well as bassist Kay Stanton from Pylon Reenactment Society and Trish Whatley. “We have exploding bass player syndrome,” Stipe laughs. “Oh-OK was always supposed to be a bass army, so we’ll have one, two, three bass players on stage, depending on the song.”

It goes to show that the art school instinct to encourage each other and keep looking deep within themselves to craft music that is truly different still resonates loudly.