Titus Andronicus Gets Back to Basics on An Obelisk 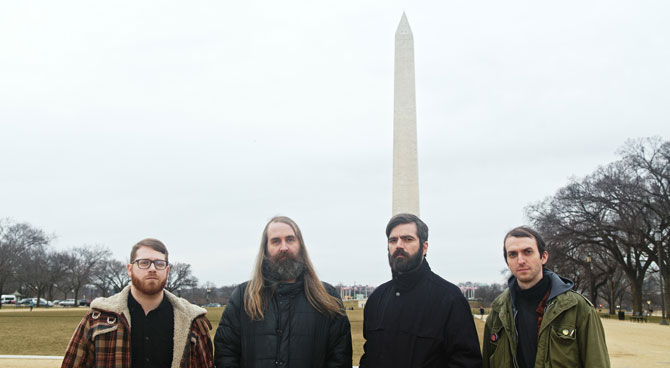 Fourteen years into their career, no one can question the work ethic of Patrick Stickles and his bandmates in Titus Andronicus. The group’s current run numbers 63 dates with a break of about 10 days between the two legs of the tour. Stickles, the band’s frontman and sole remaining founding member, says this trek, if not a walk in the park, doesn’t compare to the old days.

“Titus Andronicus used to go a lot harder than we have the past few years, in terms of the number of dates we were doing,” he says. “I don’t have all of the figures in front of me right now, but in 2009, we did, like, 170 shows, including one period where we were on the road basically for 77 days straight.”

Typically, he says, “We would do, like, a month. Then we would come back home for maybe 36 or 48 hours, and then we’d have to fly off to Europe and do that for two or three weeks. Then we had to come back and do South by Southwest for another two or three. Then we had to go open for some other band, and that was another month. It just went on and on, but we were young, and we had a lot of energy.”

The reason for the lengthy new round of touring is that Titus Andronicus has a new album to promote, An Obelisk. It’s the band’s sixth album over an 11-year span—a sign that Stickles and Titus Andronicus haven’t been slacking in the creative department, either.

An Obelisk stands as a return to form for the band after a 2018 effort, A Productive Cough, which was seen by many as a stylistic left turn for Stickles. The first four Titus Andronicus albums were hard-rocking affairs that showed the group’s punk roots, as well as offering occasional injections of Irish rock and Americana. A Productive Cough was a far more relaxed, rootsier song cycle that emphasized the less pronounced influences of the earlier albums.

“That was not so much of a rock album, exactly,” Stickles says. “There were more ballads and songs that utilized more traditional American or Celtic-derived song forms and not quite so much of the punk stuff.”

In a sense, A Productive Cough was meant to show there is a whole other musical vocabulary beyond punk that Stickles can employ to convey the intent and messages of his songs.

“Certain people may have gotten the idea that the end goal of Titus Andronicus is the construction and the delivery of fast, super hard-rocking punk songs,” Stickles says. “The punk rock song is just one tool in the toolbox, and there are any number of tools that I can utilize if I feel that’s the best way to achieve my essential purpose as an artist, which is to communicate and to be a validator to my audience.”

Stickles came into An Obelisk knowing he wanted to return to his punk roots, and he had a specific person in mind to produce the album: Bob Mould, who co-fronted Hüsker Dü and then the band Sugar and has also built an impressive and long-running solo career. It was an honor, Stickles says, to have an artist of Mould’s stature sign on to helm the project.

“There’s hardly a better role model for a guy for me,” Stickles says. “There are very few people at the level of Mr. Mould, not just in terms of his ability to craft great music and awesome rock records, but to do so with an enormous amount of integrity and respect for his own internal moral and artistic compass, and as far as the very firm hand that he’s kept on the wheel of his business. These are all things that I would like to do. Not to mention the fact that he’s had a 40-year career, and he’s still ripping it up as hard as ever, basically.”

With the extensive current tour, fans have the chance to experience the lyrically potent, relentlessly rocking and invigorating songs Titus Andronicus and Mould created in a live setting.

“The new album will be represented pretty generously, and then we’re looking through the back catalog and seeing which of the songs from there make the most sense in this context,” Stickles says. “Happily, luckily enough, we’ve got plenty of fast songs in the catalog, so I’m not too worried about coming up short in that regard.”