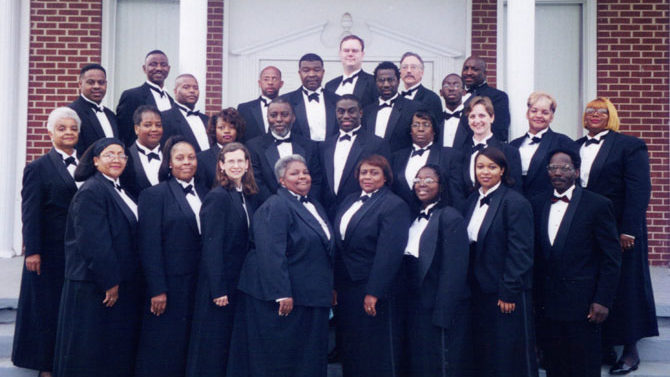 Gospel lovers, rejoice: The Athens Voices of Truth community choir will celebrate its 40th anniversary with a free concert on Sunday, Nov. 3 at Ebenezer Baptist Church.

The choir was begun in 1979 by James R. Smith, who remains its director to this day. Smith was born and raised in Athens during the Jim Crow era and was a student at the Tuskegee Institute during the civil rights movement. He then moved back to Athens, where he eventually founded Athens Voices of Truth. (A new biography, It Is Well, by local author Ellen Walker, chronicles Smith’s storied life.)

Smith wants to preserve and honor the music and traditions that have uplifted the African American community for generations. This goal, along with his interest in music, is why Smith believes that leading the choir is his purpose in life. He says he first felt this calling when he was in 10th grade.

“This is my purpose and my calling,” Smith says. “The anniversary is a milestone we’ve reached, not on our own, but by the grace of almighty God.”

Athens Voices of Truth differs from a typical gospel choir in that they sing anthems, spirituals and hymns, along with both traditional and contemporary gospel music. The choir also includes members from multiple denominations, a rarity among church-based singing groups.

This diversity of thought represents a common theme within the choir: togetherness. Smith says that not only does he want to bring diversity and inclusion to the gospel community, but to the Athens music community as a whole.

“When we organized, we didn’t organize to be just a gospel choir or to sing just to one segment or culture of people,” Smith says. “We organized to sing to the masses.”

Willimenia Haynes has been a member of Athens Voices of Truth for the past 30 years. She echoes this desire to cater to a larger audience, and says the choir’s diversity helps draw a larger, more eclectic crowd than a typical gospel choir might.

“We have people of all walks of life who come hear us—all races, all ages,” Haynes says. “I think all people, even if you’re not part of a religious group, you should experience this.”

Along with the choir’s milestone, some members are celebrating anniversaries of their own. A number of singers have been involved in the choir since the beginning, and this event serves as a chance to celebrate the time they’ve spent in the organization.

Haynes says she thinks so many people have made the choir a staple in their lives because of the bonds that have formed between members. She says the choir has been like a family to her. Haynes even says her sister used to commute from Atlanta to Athens every week just to go to choir practice.

“For a group to be together that long, it’s very rare,” Haynes says. “I enjoy singing and performing, but it’s the fellowship that makes me feel so at home.”

Smith says the choir’s message is simple: Be strong, be encouraged, keep trusting, keep moving, and keep believing. His goal is for someone to leave the performance feeling more uplifted than when they came.

“I think anyone can come and receive our message,” Smith says. “There are many people who have told me that their lives have not necessarily changed, but improved by the message we give.”

Haynes agrees. She says it’s not about forcing anyone to think a certain way. Instead, it’s about giving people hope.

“I want people to feel rejoiced,” Haynes says. “I want them to feel the love of God and a feeling of hope from the music that we sing.”

From the beginning, the choir has practiced every Tuesday at East Friendship Baptist Church. Smith says that after the 40th anniversary, the group will stop practicing as regularly, but will pick the schedule back up when they are asked to perform at an event.

The anniversary celebration will kick off with a banquet at the Classic Center on Friday, Nov. 1 at 7 p.m. Tickets are $40 and can be purchased by emailing Smith at jrussellvoices@att.net.