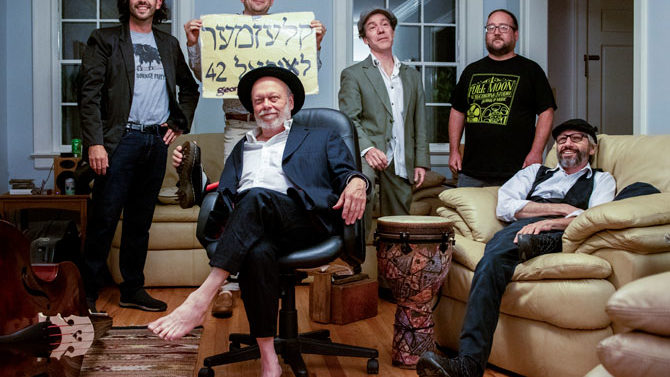 A few years back, Five Eight bassist Dan Horowitz was getting married and needed a klezmer band to play his wedding. After bringing one in from Atlanta for his special day, he decided that Athens needed one, too. “They were good, but not as good as us, and we didn’t exist yet,” Horowitz says.

For the past 10 years, Klezmer Local 42 has been Athens’ own homegrown klezmer band. Horowitz co-founded the band with now-Seattle-based Daniel Promislow, and the group has since gained many members, leading to its current nine-person lineup.

The band’s assembly was a lengthy process. Despite klezmer’s cultural significance, it was difficult for Horowitz to find other local musicians familiar with the intricacies of the traditional Jewish music, which has roots in eastern Europe and has experienced somewhat of a resurgence in recent years.

“Athens is crawling with talent, but to find people who are acquainted with klezmer and can do it, that’s not so easy,” Horowitz says.

Amidst back-and-forth banter, the band recalls finding new members everywhere from White Tiger to Earth Fare to Congregation Children of Israel, where saxophonist Eric Linder doubles as a rabbi. “Over the years, I think we have a decent number of groupie fans from the temple,” Linder jokes.

Klezmer Local 42 travels around the Southeast playing its brand of klezmer music. The band says that, in December, it’s often booked five times a week for the Hanukkah season. “Hanukkah is a good musical holiday, because you can play music on Hanukkah, and you’re not breaking Jewish law,” Horowitz explains.

Though the group relies heavily on traditional styles, it’s been known to incorporate contemporary influences, too. Says Horowitz, “It’s pretty far-reaching. We call ourselves a klezmer band because that’s sort of the foundation that we’re building off, but all of us come from different backgrounds. We’re not what I would call traditional.”

As an example, Klezmer Local 42’s sets often include a cover of the Rolling Stones’ “Paint It Black,” but the group takes pains to “klezmer-fy” it, making it their own. “The Jewishness just comes out of us—we can’t help it,” Horowitz says. “Whatever we play, it’s going to happen, and it makes me happy.”

The group, which has partnered with local organizations like Project Safe, Georgia Conflict Center and the Athens Human Rights Festival, adds that working in the community to promote diversity and equality is something it takes pride in.

“My favorite thing is the makeup of who we are,” Linden adds. “We’re nine people in a Jewish band, of [whom] only four are Jewish. Different ages, different backgrounds.”

The band’s first album, 2015’s Fear of a Yiddish Planet, featured songs in six languages (including “pirate talk”) and was recorded at Midnight Circus Studio in Buford with Richard L’Hommedieu, who also worked on their forthcoming album, The Mohel of Trenchtown. Founding member Promislow contributed to the new album by recording his vocals remotely. The upcoming LP also features an appearance by Avery Draut of local band Avery Leigh’s Night Palace. That record is expected in the near future, and the band has plans to tour, as well as visit Savannah to work on a project for the Atlanta Music Festival.