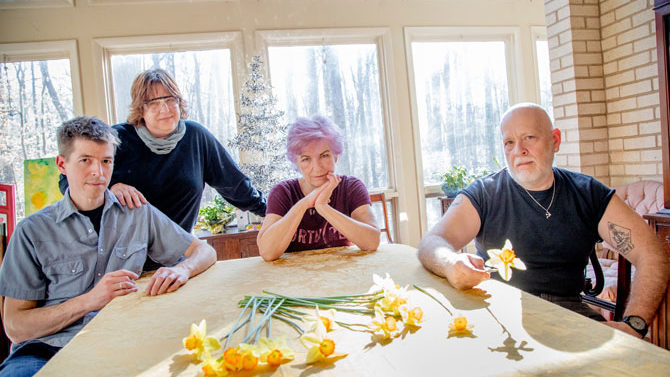 If you’ve ever wanted a reason to dress up like a pirate and drink beer, local Athens band Cosmo Jr. is here to fulfill your dreams. On Thursday, the band will perform at The World Famous in celebration of International Talk Like a Pirate Day. The event, aptly named “Rock Like a Pirate,” will feature the group playing its full-length pirate rock opera, Sisters in Arms.

Cosmo Jr. guitarist Kevin Dunn explains what, exactly, it means to rock like a pirate. “Think of it as the sort of thing people do on St. Patrick’s Day, except it’s devoid of any actual reality,” Dunn says. Attendees are encouraged to dress up in their most festive pirate garb and join the band in a celebration of what once was.

Released last year, Sisters in Arms follows two real-life female pirates, Anne Bonny and Mary Read, as they struggle to survive in a world much harsher than what we know now. Along with the original music, Thursday’s performance will also feature opportunities for audience participation. The band compares the event to screenings of the cult classic Rocky Horror Picture Show, in that the audience is just as important as the performers.

For those who want to familiarize themselves with the material beforehand, the 15-track, soundtrack is available to stream and purchase on Bandcamp.

The pirate theme is one of several that Cosmo Jr. has explored over the years. Most recently, the band has been working on a set called “Athens Legends,” which features covers of songs written by familiar local personalities. The group also performs a set consisting only of tracks written in collaboration with band member Dana Downs.

Cosmo Jr. has performed at The World Famous for the last three years in celebration of International Talk Like a Pirate Day. This year, attendees can expect a slightly different experience, as a new track, written by Dunn, will be added to the repertoire. A pirate convocation by Davis Ripley Keller will kick things off, with the musical performance to follow. Narration has also been added to the opera courtesy of Heli Montgomery Dunn, in character as Mary Read, to clarify the plot and create a more dramatic effect.

Though the group admits the event is largely an opportunity for locals to drink in costume without the hectic trappings of St. Patrick’s Day or Halloween, Dunn says there is an educational side to the opera, too.

“When you go ‘Yarrr,’ you might as well be someone playing Hamlet in the 1600s,” Dunn says. “It’s a sentimental and silly link to an older form of English that I think is important to preserve.”

Whether you already have an appreciation for piratry or your only knowledge of pirate history involves a character played by Johnny Depp, “Rock Like a Pirate” is meant to be an inclusive and positive experience for everyone involved.

“Thursday night is when the weekend starts in the modern world, so why not start yours with us?” Dunn says. “You won’t see something quite like this every day.”