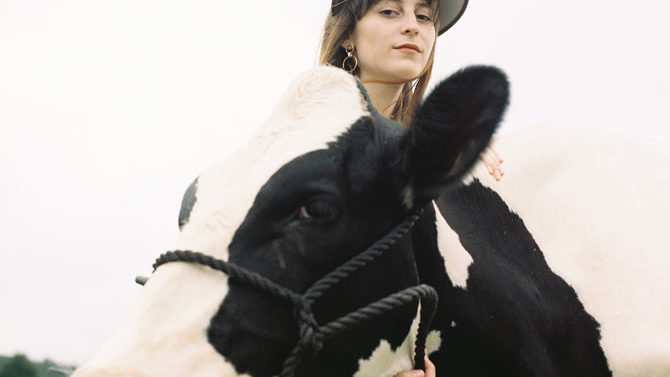 Atlanta singer-songwriter Faye Webster is nine shows into her first leg of touring behind a new album when I reach her by phone, choking back some Throat Coat herbal tea. “Hi, how are you?” she asks, before catching enough air to laugh. She and labelmate Stella Donnelly just played a show the night before at The Bishop in Bloomington, IN, home to her new imprint, Secretly Canadian, and she’s killing time before hitting the road for Chicago. “What else do you need in life?” she wonders aloud.

Our conversation bobs along fluidly as we talk about her forthcoming album, Atlanta Millionaires Club (to be released May 23), her love for Braves baseball and what she’s currently playing on her neon-yellow-accented Nintendo Switch. Our back and forth is so pleasant that I have to stop and ask myself if I just interviewed the right person after we hang up. There is no trace of loneliness in her voice, no sign of homesickness or longing, just… charm.

Webster’s music possesses a similar quality, her songs so easy and breezy that one could easily miss their understated moments of sadness. Yet she calls attention to these subtle moments of heartache by paring down extraneous elements in each song’s arrangement. Every instrument sits just right in the mix so her lyrics can be heard softly, yet clearly. That heavy heart is present across much, if not all, of Atlanta Millionaires Club’s 10 tracks.

“She uses nuance to be impactful,” says album co-producer and Chase Park Transduction engineer Drew Vandenberg. “She forces you to pay attention to the details of what’s going on emotionally, because she’s not beating you over the head with big production moments.”

Take the album’s opener, “Room Temperature,” which begins with Webster cooing, “Looks like I’ve been crying again over the same thing/ I wonder if anyone has ever cried for me.” The otherwise forlorn lyric ebbs and flows tranquilly while a slide guitar elicits much warmer beach imagery—fitting, since the video for the song finds Webster synchronized-swimming in a pool and dancing at a faux luau with a gaggle of gals for backup.

Atlanta Millionaires Club was written and recorded in pieces over the course of 2017 and 2018, and it was during that time when Webster figured out whom she was—and whom she wasn’t.

“I wrote them all when I came back from school and moved out from my parents’ and started living by myself,” she says of the record’s songs. “So, I think they came out of me kind of being tied off for the first time in my life, and I guess feeling alone for the first time.”

“You can’t teach [songwriting]. You can’t teach it in that very textbook, formal way,” says Webster, who had already begun to develop her own style after releasing a full-length album in 2013. “It was just kind of a step back, almost,” she continues. “Why do I need this old-ass dude to tell me how to write my songs?”

She was also collaborating with Atlanta hip-hop artists—her last album, a self-titled effort in 2017, was released by Awful Records, which also boasts A$AP Mob affiliate Playboi Carti as an alum. One experience, in particular—quietly tracking vocals for Awful emcee Ethereal while her parents slept down the hall—helped shape her effortless vocal delivery.

“I sent it to him, and I was like, ‘Don’t worry, I’ll redo it tomorrow. It’s just for you to hear what I’m doing.’ And he was like, ‘No, this is great. This is actually perfect. It’s so raw and honest.’ And I was like, ‘Oh my God, I should just stop putting effort into singing and just sound like Faye,’” she says with a laugh.

Whether that was the definitive turning point or not, Webster’s vocals have since taken on a buoyancy that helps set the course for Atlanta Millionaires Club, which also benefited from having its backing band—including in-demand Athens pedal steel player Matt “Pistol” Stoessel—record together live in the same room.

“I think that really opened things up a lot in terms of the ideas that were floating through the air,” says Vandenberg. “We were able to get closer to the core emotion of the songs faster, because we were all in there together expressing ideas to each other.”

Webster will wrap up a series of domestic tour dates supporting Lord Huron before releasing her album, after which she’ll head to Europe for a week of shows, then return to the States for a headlining East Coast tour through the end of June. Even still, there’s no hint of melancholy in her voice while discussing the long road ahead. In fact, she sounds pretty pumped for what’s yet to come.

“I’d like to keep trying to write, which I can’t on the road. That, and, I guess, just keep making stuff, even if it’s not music,” Webster says emphatically. “Just making my action figures, making cool videos. Just making something physical.”