For John and Kiran Fernandes, Music Is a Family Affair 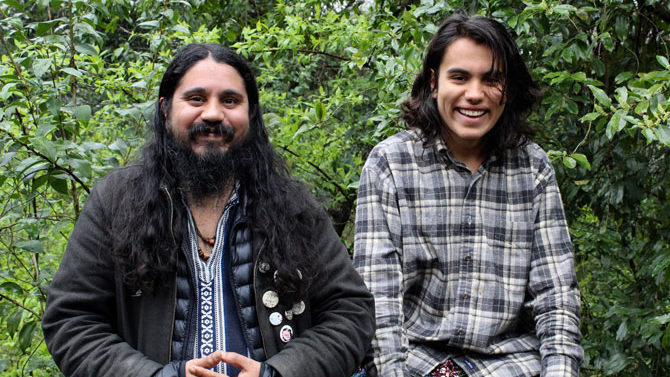 John Fernandes is no stranger to the Athens music scene. Known for his work with the Elephant 6 collective—specifically, as a key member of The Olivia Tremor Control and Circulatory System—Fernandes also has two solo albums, estimates he has played on 77 records and runs his own label, Cloud Recordings, which has 27 releases since 2001.

An Athens resident since 1994, Fernandes constantly creates music while working full-time selling music at Wuxtry Records on Clayton Street. “I listen to music all day at work, and then come home and listen to my records,” he says. “I’m very passionate about music.”

Growing up in a musical household, Kiran says he has always been artistic, mostly doing visual art until he picked up the keyboard a few years ago. He credits the beginning of the father-son duo to a looping pedal.

“I’d just be sitting here with a loop pedal making experimental sounds, and then he’d come jam on it,” Kiran says of his dad. Since that was his first experience with instruments, he says it was very experimental at the start, but the music grew and changed as they kept playing together. The duo has since gigged regularly around town, showcasing their individual tendencies and their combined talent.

Both Fernandes men find inspiration in all aspects of their lives. Kiran says he finds it in small, daily activities that aren’t much thought about, like the rumble of an air conditioner or the squeaks of a bike wheel. John says a lot of his music draws from field recordings from India and Africa, as well as the inherent qualities of his four-track home recording setup.

“I’m really inspired by birdsong, and in my solo shows, I can see some parallels between Brian Eno’s Discreet Music, where there’s non-synchronous loops going on,” John says. “I sometimes step outside and practice with the birds, so there’s all these tweets and twizzles.”

Their avant-pop music features Kiran playing keys or guitar and John playing multiple instruments—frequently the clarinet. On guitar, Kiran uses a lot of unique finger stylings that draw upon both traditional and modern music.

John says he has seen his son evolve with his talent, and now, “He’s become masterful.” He adds that, together, their music just works. “It’s pretty meditative and textural, and there’s certain things that we do, but there’s a large amount of improvisation, as well,” he says.

The duo’s chemistry clearly shows. Kiran recalls times when they’re playing what he calls “pockets” of improvisational breaks in their songs, and the two will hit the same note simultaneously. He says it’s those moments where their intuitiveness comes through.

“It’s kind of an act of not taking it so seriously, and also just making music for your friends and for right now, and not necessarily for this grand vision of extending to all parts of the universe or something,” says Kiran, “which is often the narrative people are trying to get to.”

The Fernandes duo recently returned from a Southeastern tour, during which they played unique venues like art spaces, animal refuges and vintage clothing shops. Kiran says, when playing music that is challenging and improvisational, it’s different playing to audiences that don’t know what to expect.

“It’s hard playing music like this on the road,” he says. “I’ve gotten to a point now where I believe in what I’m doing, and I think it’s important, but I do know that the world as a whole is probably not gonna get it.”

Still, the two found joy in being on the road together. “This tour was a dream of mine, and it turned out very successful,” says John. “I was just thinking how, if something random happened and I was hit by a bus tomorrow, I could actually die a happy man, now that this dream I have was realized.”