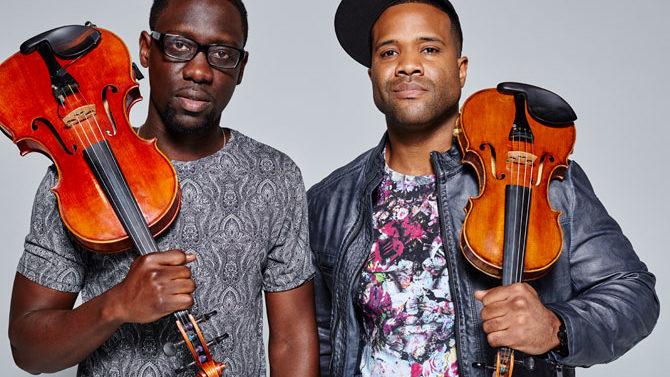 Black Violin, a duo that blends classical composition with elements of hip hop and R&B, will perform at UGA’s Performing Arts Center Mar. 7 as part of its “Impossible Tour.” On Thursday, the duo, which has collaborated with Kanye West, Wu-Tang Clan, Lil Wayne and Alicia Keys, among others, will add another group to the list: the orchestra students of Athens. Thirty students from Clarke Central and Cedar Shoals high schools will join Black Violin onstage at the PAC.

The students’ appearance is part of a concerted effort by Black Violin to inspire youth across the nation by showing them that nothing is impossible—even combining hip hop and classical music. Members Wil Baptiste and Kev Marcus played in their high-school orchestras, which is what sparked the idea to invite local students to share the stage with them. Baptiste says he wants to show the kids that they can be successful pursuing their dreams, even in an unconventional way.

“We want to inspire them to think outside the box and do something differently,” Baptiste says. “It doesn’t have to be just with music, either.”

Both Baptiste and Marcus know what it is like to be rejected for creating something unique. Baptiste says the pair used to pitch themselves to clubs and venues, only to be passed over when bookers learned about their unconventional approach. Instead of accepting defeat, the pair would set up outside the club and play to whatever audience was there, and often, the promoter would then invite them inside or give them a future time slot to perform. Baptiste says this determination has been the key to the pair’s success.

“When I feel like I’ve inspired someone to do something great, that’s the best feeling in the world,” Baptiste says. “It makes me feel like I’m doing what I’m supposed to be doing.”

Eunice Kang, the orchestra director at Clarke Middle School and Clarke Central, says her kids have been preparing for the opportunity for weeks. After UGA notified Kang about the opportunity, she began to move forward with preparations. Kang partnered with Rebecca Floyd, the orchestra director at Cedar Shoals, to hold auditions for the students from each high school who wanted to be part of the performance.

According to Kang, performances like these can be the difference in a child continuing to play their instrument after they graduate from the orchestra program.

“I want to give them a lifelong appreciation of the arts,” Kang says. “That’s why I try to get the kids to perform as much as possible in the community, not just at school.”

Kang says many students were already familiar with Black Violin, which made it more exciting when she told them the news. One student had been to a Black Violin concert and had told Kang he was a huge fan, and when Kang told him he could audition to play onstage with the duo, he was ecstatic.

Baptiste says it’s not uncommon to hear people say they have grown up with his music, as Black Violin has been active since the early 2000s. He says after spending so long learning and growing, this is his opportunity to give back.

“There’s no greater feeling than giving something to someone that comes incredibly easy to you,” Baptiste says. “That’s the key to happiness.”

Kang says that after all the time her students have put into practicing together, they deserve to have an audience to appreciate their efforts.

“We have some of the best kids ever—they’re so talented and dedicated,” Kang says. “I want other people to see it, and I want the kids to recognize it as well.”

The orchestra students will join Black Violin for their final selection, “Shaker.”

Those who attend Thursday’s concert can expect the atmosphere of a rock show, with lights and effects that rival any popular artist. This is part of Black Violin’s wide appeal: The duo’s mission is to create an experience that can be enjoyable for anyone, regardless of taste or background.

“Our show brings people together,“ Baptiste says. “It’s just two guys giving everything they have to create an experience unlike anything else.”