Born Ruffians Return to Their Roots With New LP 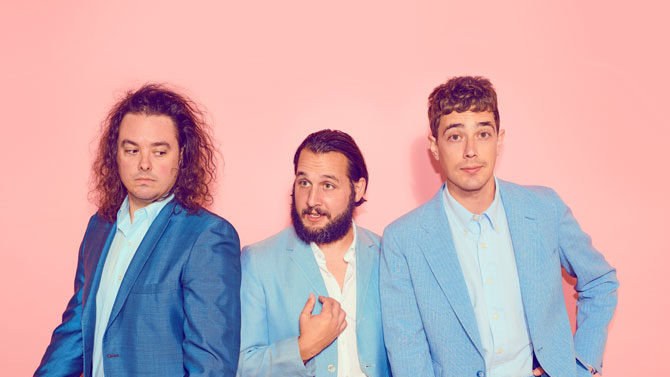 On Wednesday, Nov. 28, Toronto-based Born Ruffians kick off the last leg of a three-part tour at the Caledonia Lounge. The indie-rock band is on the road supporting its fifth studio album, Uncle, Duke & the Chief, a record that finds the band’s members returning to their roots with assistance from producer and collaborator Richard Swift, who died earlier this year.

At its core, the band has always been a trio featuring guitarist and vocalist Luke Lalonde, drummer Steve Hamelin and bassist Mitch DeRosier. After releasing Birthmarks in 2013, Hamelin left the band to pursue a degree in history and international relations. While in school, Hamelin stayed involved with the group, appearing on half of its 2015 album Ruff. When Hamelin returned in 2016, the band alternated between a four-piece—with Andy Lloyd on guitar and piano—and a three-piece. Lloyd recently had a daughter, and the band returned to its original trio for the first time since Birthmarks.

“I think it makes the three of us play harder onstage, because we know that each of us is one-third of the show, so we can’t hide during any of the songs,” Hamelin says.

Uncle, Duke & the Chief was produced by Swift, who died suddenly in July at age 41. Swift was known for his work with The Shins, Lucius, The Black Keys, Nathaniel Rateliff, Damien Jurado and others. In January 2017, Born Ruffians set out to record an initial five songs with Swift, but ended up completing the whole nine-song album in 10 days.

“[It was] one of those rare experiences where just everything clicks,” Hamelin says. “You’re doing a song a day, the producer and the band are completely in sync, and everyone’s happy when they leave. Even the mixing notes after were minimal.”

Hamelin says their time with Swift was unlike any other recording experience they’d ever had, and before his death, they were discussing making another record with him. “It was only 10 days, but we got pretty intimate with him making the record, and he plays and he sings backup on the record,” Hamelin says. “He’s very much a member of the band on the record.”

The new album was initially recorded live in the studio by the three-piece, and they later overdubbed vocals and other instrumentation, like they had done in 2008 with Red, Yellow & Blue. The goal was to center the album around the core trio, with only a few takes allowed per song. “[Swift’s] music always sounded really live—not really over-produced, not really too slick, not lo-fi, not bedroom recordings,” Hamelin says. “He just knew how to make it that warm, older-record sound, and that’s what we wanted for these songs.”

Born Ruffians is known to bring in new elements on each record while still holding on to their core sound. Hamelin says some of his favorite additions this time were a Roland Juno keyboard that Swift had in his studio and a spring reverb tank they used on vocals. Hamelin says the best drum sound on the record is on “Spread So Thin,” because Swift put a large brick on the snare, something Hamelin says he wouldn’t have thought to ever do.

Hamelin also says that, if you listen closely in “Working Together,” you can hear Swift describing the drum sound. The band purposefully left that and some other “mistakes” on the record, making it more personal and raw. “He would pop into the live room and lay something down without even running it by us, which we loved,” Hamelin says.

Despite the death of Swift, Born Ruffians don’t plan to slow down. The tracks on Uncle, Duke & the Chief were chosen from a larger batch of songs the group has been working on, and Hamelin says their next album will be released in 2019.

“The record was already special to me—it was like my first full record back,” Hamelin says. “And now that it’s the only Richard record that we will ever get to do, it makes it untouchable.”