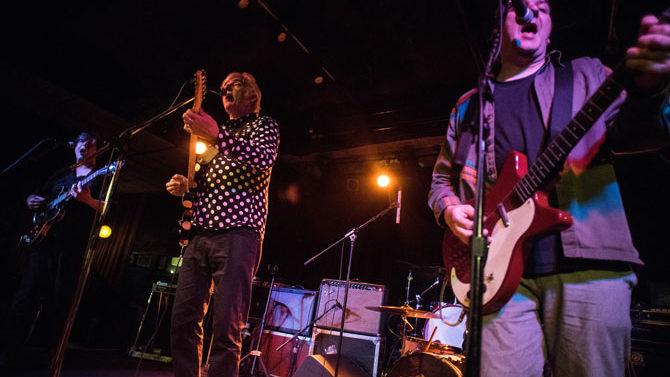 Editor’s note: Singer-songwriter Robyn Hitchcock—known for his extensive solo catalog in addition to his work with pioneering British rock group The Soft Boys—returns to Athens this week. No stranger to the Classic City, Hitchcock has established a bond with our music scene over the decades, inviting local mainstay Elf Power to back him during his 40 Watt appearance in January. Hitchcock and Elves frontman Andrew Rieger—a longtime admirer of the English icon—recently connected via email to discuss their lives in music. The Q&A has been edited for style and length.

Andrew Rieger: I grew up in a small town in South Carolina with no college radio stations or cool record stores, so my first introduction to your music was the video for “Balloon Man” on MTV’s “120 Minutes.” Although MTV’s programming in general was pretty bad, that show was pretty important to me, as it was one of the few conduits for good new music. What were your feelings about MTV at the time? Did you notice more fans at shows and higher record sales after they started playing your videos?

Robyn Hitchcock: The first I heard of MTV was when somebody from their office called me at my house in London in 1985. Where did they find my number, I wonder? It turned out that they were already showing my videos on “120 Minutes.” Where had they gotten them from? MTV was mysterious.

My friend Tony Moon and I made four or five little home-movie type videos in the mid-1980s on Super 8, culminating in “Balloon Man.” Then A&M steered us into making 16 mm videos, and having directors, and spending a lot of money we didn’t have, and it all went to shit. My brand was Super 8—we didn’t need to meddle with it. But yes, “120 Minutes” did recruit an audience for us, as did college radio, and I’m eternally grateful to them both.

Was MTV still relevant for y’all when you started? How was your word spread? My peak time in Athens was the early 1990s—I don’t think you’d emerged yet. Were you in the same breath as Olivia Tremor Control?

AR: We started around 1994. Yes, both Elf Power and Olivia Tremor Control had self-released records recorded at home on four-track cassette, as we couldn’t afford to record in fancy recording studios and really just preferred the sound of four-track cassette recording… We met at a party and traded records and became fans of each other’s music, and began collaborating together, playing on each other’s records and touring together.

We had one video of ours played on “120 Minutes” in the early 2000s, but by then that show was on MTV2, which not that many people tuned in to. MTV had made the switch by that time to mostly reality-show dreck. College radio was a big supporter of us, and that helped a lot to get the word out in the early days.

I’ve enjoyed some of your short works of fiction I’ve read—sometimes included in your album liner notes—and I’ve heard that you’ve been working on a full-length novel. Is there any truth to that, and if so, what’s it about, and do you have any plans to publish it?

RH: I’ve tried several times, but I can’t sustain a narrative for a whole novel. I don’t seem to have the gift of creating sympathetic characters, either. So, I’ve destroyed all my attempts. I tried a kind of memoir too, but I got bored writing down things I knew already. My fractured focus is better suited to songs and poems. I am planning to publish a book of each, if I can. There are many notebooks on my shelves, crawling with words, all thirsty for publication. Have you ventured into writing at all?

AR: I’ve written a few short stories and a few music-related articles. I had what I thought was a brilliantly original idea to write a screenplay about a religious group that clones Jesus from genetic material found on the Shroud of Turin, but upon researching the idea I realized that several others have already written that screenplay! Back to the drawing board, I suppose.

RH: Then it’s bound to happen eventually. But even if you cloned Jesus, could you clone his upbringing?

AR: Well, that’s where it could get interesting. You could have teenage cloned Jesus rebel against his imposed godly stature by wreaking all sorts of havoc and mayhem, which would cause his followers to become conflicted and question their faith.

You’ve performed with Mike Heron of the legendary 1960s Scottish folk group Incredible String Band recently. I’m assuming you grew up listening to his records. How did that feel to play with someone that you’ve connected with through their music before you met them in real life?

RH: Mike is a lovely fellow. He’s inseparable from Corrina, his wife and their daughter, Georgia, who plays keys with him. He’s still in good voice and sings his old songs much as he did 50 years ago. Mike’s a pretty humble cat—he doesn’t seem to feel burdened by legend status. There’s no flashing arrow over his head going, “Look at me.” I don’t think he writes much anymore. The momentum of the 1960s has left him, but left him very sweet and smiley.

My hero worship of Incredible String Band had waned by the time I ran into Mike, so there wasn’t too much overawed creepery on my part, I hope. But it’s always a kick to sing part of “A Very Cellular Song” with him and Georgia.

I take it that you’re String Band fans too? When did you discover them? I’m always pleasantly surprised to hear of people becoming converts to them latterly. They seemed so much part of their time.

AR: Yes, I love Incredible String Band and the offshoot Clive’s Original Band very much. I discovered them in the late 1990s, along with Fairport Convention, Shirley Collins, Anne Briggs—all that great folk music of the 1960s and ’70s. Lately, I’ve been really into one of the later ISB albums: Earthspan, from 1972, which has a lot of orchestral elements and majestic production flourishes. It borders on prog-rock, but I love it. Here’s a song if you want to take a listen.

RH: Thanks! How strange to hear this music coming out of my phone. I last heard it 45 years ago on my portable record player. Creepy bliss, riding on Scientology. Likky McKechnie, the female lead singer on that song, disappeared in the California desert a few years later. Mike and Robin are off Scientology now, but I think it drained them.

AR: Your collaboration with Heron is somewhat similar to Elf Power backing you up, as we’ve long been fans of your music, but it felt pretty natural when we first played together back in January—though we were certainly feeling the pressure of not wanting to let you down as we learned your songs to play with you, with not much time for rehearsal together.

RH: Y’all did a great job on learning my songs, and you seemed at home with them. Thank you, too, for suggesting the setlist. I have too many to choose from and always seem to pick the same selections. Here’s to the next round at the 40 Watt!

AR: I saw you perform your album I Often Dream of Trains in its entirety at the All Tomorrow’s Parties Festival in England in 2012. Was that a challenge to present that whole album live? Did you enjoy doing it?

RH: I edited it somewhat—it’s not exactly in the order in which it was originally released as an LP. But, yes, I did enjoy it. When I made that record, I wasn’t playing live at all, and had no plans to do so. I was utterly disconnected from the early 1980s music scene, which is maybe why people like it now. Then, along came R.E.M., and I was hauled back into the game. They helped to steer listeners my way. Thanks, boys!