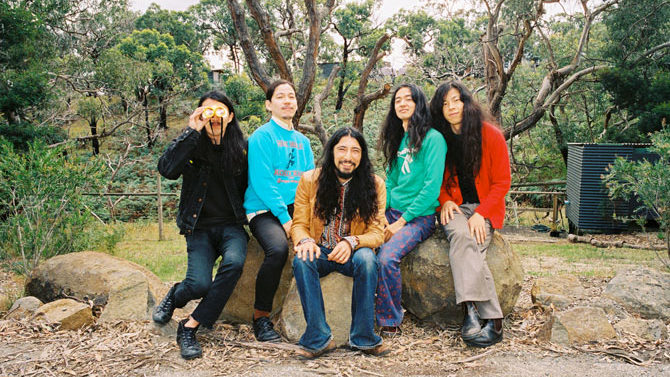 Like any good experimental band, Japan’s Kikagaku Moyo is hard to pin down stylistically. It could be lulling you into a trance with droning sitar one second, then jarring you awake with dueling, feedback-loaded guitar solos the next. Even the group’s ancient-sounding folk music isn’t safe; chaotic noise constantly threatens to breach the walls of Kikagaku Moyo’s sonic fortress. Genre labels don’t easily apply.

Perhaps the best way to understand Kikagaku Moyo is by the name itself, which translates to “geometric patterns.” According to drummer Go Kurosawa, the band sees shapes shifting in space on a nightly basis.

“When we’re onstage, we just close our eyes and play, and you can see the lights moving, this pattern on the back of your eyelids, without taking any drugs,” Kurosawa says. “You see music kind of spaced out.”

Kikagaku Moyo’s psychedelic music is mostly instrumental. The band sings occasionally, but treats the human voice like another instrument and never places it at the forefront of the mix. It’s also highly improvisational, as the group reserves specific sections in most of its songs for lengthy onstage jams that morph from soft and ethereal to downright heavy, and back again.

Kurosawa says the songs often become something new in the live setting. “Everything is written, but our live and recorded music is completely different,” he says.

The band’s compositions demand a high level of musicianship, and each member must be on the same wavelength, says Kurosawa. It helps that they hardly ever spend time apart, especially when they’re on the road. “We sleep together in one place,” he says.

Speaking from Seattle, Kurosawa explains that the band started as a loose collective on the streets of Tokyo, where it busked for disinterested passersby and played clubs to practically no one. Kurosawa says the group’s initial difficulty getting noticed was mostly a cultural thing.

“First of all, people don’t go to shows in Japan like they do in the U.S. or Europe,” he says. “Going to a show is more like a big concert—not casual, not going to happy hour with your friends. Also, the tickets are more expensive. Even for local bands, you pay $20 or $25.”

Kikagaku Moyo pushed forward anyway, posting its debut EP on Bandcamp before scoring a record deal. It started touring the world virtually nonstop, discovering foreign audiences to be far more receptive than those in Japan. Along the way, the band has generated a mysterious aura and even its own folklore: The first song on Kikagaku Moyo’s self-titled 2013 debut was supposedly “written over a night spent jamming on a suspended footbridge in remote mountains.”

Kurosawa never expected music to take his group so far, but he’s encouraged by the results and hopes other Asian bands replicate its success. “If you can reach people, they’re open to music from another part of the world,” he says. “We’re trying to push our friends’ bands to tour the U.S. and Europe.”

Meanwhile, Kurosawa and company will continue their own journey. The band recorded last year’s improv-heavy Stone Garden in a basement in Prague, then traveled to Lisbon to work with jazz master Bruno Pernadas for its latest release, Masana Temples.

“We were in the U.S. touring, and it was really cold. We were all sick and kind of tired,” Kurosawa recalls. “Then we went to Lisbon right after, and it was really sunny. Lisbon is nice and slow—chill—and that made us feel really comfortable. That’s who we are: really chill. It was an amazing experience, and it influenced how the record sounded.

“I think just experiencing the changes of the seasons and the culture while we were on tour influenced the feeling of the songs,” he continues. “Each song is really different.”