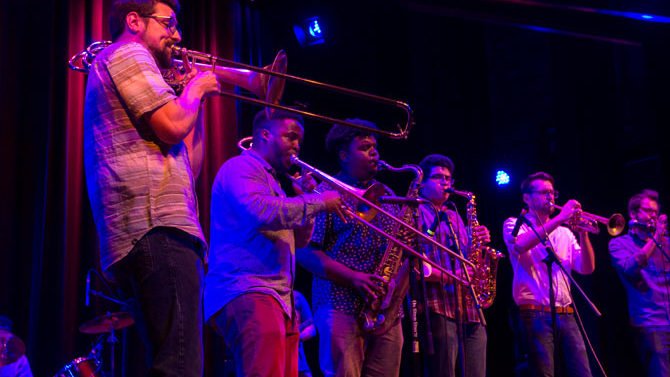 Last month, the 2018 Flagpole Athens Music Awards show took place at the Morton Theatre. Aside from serving as a kickoff to AthFest, our awards program is a celebration of the year in local music. Two of the biggest awards are Artist of the Year, given to readers’ favorite overall group, and Upstart, given to a band that formed during the previous 12 months and made a strong impact off the bat.

This year, nine-piece improv-fusion group Misnomer (formerly Mister Tie Dye) took home both Artist and Album of the Year (for Neighborhood), in addition to opening the show with a standout performance. The Upstart trophy went to dream-pop/psych-rock outfit Calico Vision, which made a splash in its first year with a series of memorable live performances involving creative outfits, masks, bubble machines and other ephemera.

In the spirit of celebration and conversation, we invited members of both groups to Flagpole HQ to chat about Athens music. For over 90 minutes, the bands discussed their writing processes, live show struggles, AthFest experiences and much more. Below, we’ve gathered a series of highlights from the meeting. As it was was a fast-moving and loosely moderated back-and-forth between seven people, for the sake of readability quotes are attributed to the band as a whole instead of individual members, except where otherwise noted.

Calico Vision: Why did you change your name from Mister Tie Dye to Misnomer?

Misnomer: Well, recently we’ve been trying to grow our brand, and with a name like Mister Tie Dye, you kind of get put into a niche. It sounds like a Grateful Dead cover band, which we definitely aren’t. So, in that way, Mister Tie Dye was like a misnomer for us. Honestly, the name Misnomer was initially a joke. We were making a big list of possible new band names, and Matt Vu suggested Misnomer as a gag, but we all actually liked the sound of it.

CV: Yeah, when people were talking about Mister Tye Dye, the first thought you have is “Oh, a jam band with noodly guitars. I know what that sounds like.”

M: But actually, it’s, like, no guitars at all. So, is it pronounced Calico Vision or ColecoVision?

CV (Naoko Uno): Well it’s pronounced Calico Vision, but is a play on ColecoVision. I just don’t think anyone under 25 gets the reference.

M (Malik Henry): I thought ColecoVision sounded familiar, but I thought it was maybe something from a fantasy book.

[Editor’s note: At this point, Calico Vision’s Bren Bailey chimes in to disagree about the name being a play on ColecoVision, saying the connection was made after the fact.]

M: What was the actual reason for the name, then?

CV (Bren Bailey): I just like the sound of those words together. I also like cats. I’d love to see the world through a cat’s eyes. Figure out why they love to stare at walls. Cats can perceive a dimension that we don’t. 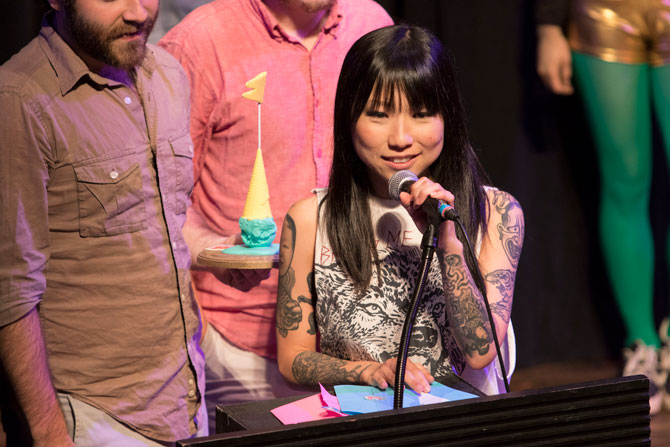 Calico Vision’s Naoko Uno accepts an award at the show.

M: How did you guys meet?

CV (BB): Landon [Woodward] and I actually worked together in the kitchen at Pauley’s Crepe Bar. Nate [Lee] and I met through a mutual friend that was also connected to Pauley’s. Sometimes it feels like Pauley’s is the lifeblood of the Athens music scene. Adriana [Thomas] and I played a bunch of the same shows together when I first started playing in bands. Naoko and I met on Tinder.

CV (NU): Yeah, it was a funny coincidence, because I had just come back to Athens after a long absence, and Bren’s old band broke up right when we got together on Tinder. From there, we just made a musical connection with each other. How did you guys meet?

M: We met through jazz band and marching band. Most of us got our start in UGA music programs.

CV: What’s your writing process? Where do you draw inspiration from?

M (MH): I love OutKast. If we could just be OutKast’s horn section, that would fulfill my lifetime goal. Their album Aquemini, for me, is like the closest thing I aspire to when I try to write music.

M: Yeah, there are very few tunes that just one person wrote. It’s usually one person comes up with an initial idea and it changes as everyone comes in with their own additions and spin on it. Everything is subject to change as some songs develop over time.

CV: How do you find the time to practice with nine of y’all in the band?

M: Typically nowadays, we practice two times a month. In the earlier stages, everyone was still at UGA, so it was a lot easier to get everyone together, but as everyone has been graduating and going their separate ways, we need to schedule way ahead of time. It’s only going to get more hectic from here. Do y’all split writing duties?

CV (BB): I write a lot of stuff. Sometimes me and Naoko will write together. We all usually just collaborate, bring in different chord progressions and see how they work together.

M: Do you have a core influence for your songs?

CV (BB): It usually just comes from the background of what we listen to. Nate definitely brings in a funk sound and influence to the band, while someone like Naoko brings in a more classical sound on the keys. Then Landon and I just bring in white-boy guitar sounds [laughter].

CV: Despite being a great music town, what do you think Athens should change?

M: I’m not sure if we’ve been around long enough to really have a great answer to that question.

CV (NU): I just feel like the music scene has gotten a lot better. I left Athens in 2005, and back then it was just a boys’ club. Little white boys running their own DIY space in a bubble. Now it all feels much more inclusive. Being at the Flagpole Awards and watching the Athens Rising documentary, it’s just great seeing how much everything has branched out.

M: I think other than the assumptions around our name initially, we don’t have any complaints so far. What about you?

CV: It would be nice to make more money on shows. Or any money, really. It’s kind of hard, because I like the fact that a lot of shows are free in Athens. Because if I’ve never seen a band before, I like to get some idea of who they are and what they sound like before I pay for a show. So, if it’s free, I can just wander in there and find a new band to love—but then they aren’t making money. Also, while it’s happening more recently, there is a need for even more mixed-genre shows. Mixing rap, rock, funk, etc. Doing shows like that exposes everyone’s music to a wider audience. It’s a mystery why more people don’t do it.

M: That’s why stuff like AthFest and the Flagpole Awards are so great—you get exposed to so much and hear a lot of things you might not hear otherwise. One of the things we love about this town the most is that anybody can get their start here. There’s room for everything and everyone. 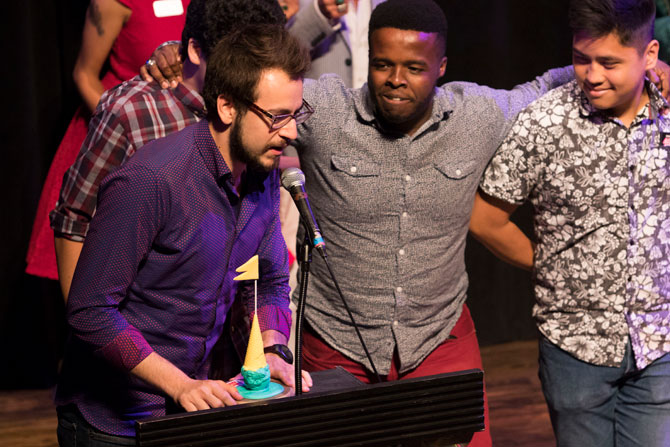 M: We’ve been lucky, being involved in Redcoats and the UGA music program—we get tons of people who want to come out and see us from that inherent support system. From that base, it trickled out to the rest of the Athens community. Over the past two years, we’ve seen the type of crowds at our shows drastically change. That’s one of the things that’s really cool about our shows—it’s a good mix of UGA School of Music people and people who are more involved in the independent scene.

CV: It used to seem like local artists were segmented more either by genre or aesthetic. Like, it would be, “Oh, that’s a townie band,” or “That’s a jam band,” and they would be on separate shows. Now, there’s been more of an effort to blend everything and support each other without focusing on specific genres—you just listen what you want to listen to. There’s less emphasis on putting a label on a band.

CV (BB): I moved here not knowing anyone and started my first band through a Craigslist ad. Then I started emailing venues and getting shows just like that. After a while, people started coming out—we weren’t very good, so not that many people—but eventually, we got better and things worked out. I feel like if you’re talented enough to get people who see you want to see you again and are willing to talk to venues and other bands, you have a support system here. It can be hard for really shy people, but if you’re talented enough, it will likely balance out.

CV: We’ve released four songs, three of which we recorded and produced ourselves. So, we’ve just been releasing singles, and eventually we’re gonna compile all of our releases into a full album. We’re doing everything ourselves right now out of our own DIY studio. We want to tour, but right now we’re gonna focus on venturing out to other locations around the Southeast on the weekends—get our name out there a little more.

M: We kind of just got over the hump of a lot of stuff. We just got done with a tour at the beginning of June. We’ve got some festival and show dates coming up. We also have a collab we’re working on with Linqua Franqa. We have at least one song for that project completely finished, but we’re not sure where it’s gonna end up or when it will see the light of day.