Shade Releases a Freewheeling Album in Memory of a Friend 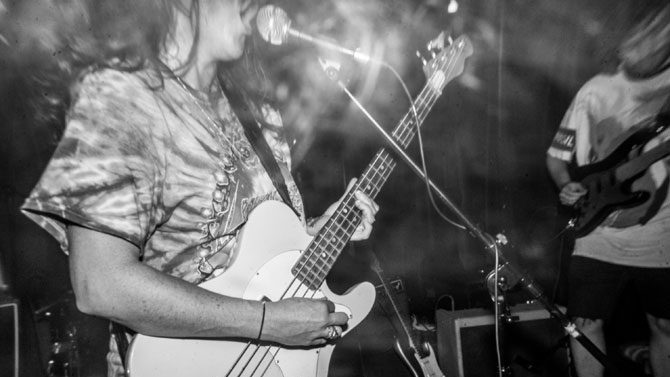 For all intents and purposes, the local genre-benders in Shade have had their sophomore album in the can for three years now. Any other band probably would have grown anxious, apathetic or a mix of the two holding on to their creative treasure for so long, eager to release it into the world for all to hear—and rightfully so. Yet the Athens trio, led by singer and guitarist Phelan LaVelle, seems to have remained pretty chill about it.

“We got into other life happenings, wrote other songs, met other people [and] developed other skills,” LaVelle says. “We loved it, it was cool, and we just sat on it.”

Recorded with David Barbe in the spring of 2015 at Chase Park Transduction, the cheekily titled Why Spread Panic retains much of the primal energy of Pipe Dream, the band’s 2014 debut. In fact, in many places it supersedes it. Where Pipe Dream exhibited traces of taut post-punk inflection and relative grounding, Why Spread Panic plays like a freewheeling surrender to the cosmos, its larger-than-life psychedelic jams ushering Shade into a new aural phase that’s only grown more dynamic as time has passed.

“I like to think of this album as a geode underground, garnering power, cultivating its most radical crystals for an inevitable unearthing,” LaVelle says. “Little did we know it would be almost three years in incubation.”

As LaVelle explains, it wasn’t like the band was just sitting around during the interim. LaVelle remained active in Crunchy, her duo with drummer Kathleen Duffield, and former bassist Will Cash moved to Atlanta after recording for the album wrapped up. “Al [Daglis, Shade’s drummer] and I kept jamming, honing our natural chemistry and democratic songwriting methods,” LaVelle says. “Greg O’Connell started jamming with us, and it all feels good, fluid [and] organic. So this is the current Shade lineup: me, Al and Greg.”

So, why 2018, one might ask, after that long in hibernation? “I feel like playing music is so important right now for a million reasons, the dearest of which being that it gives you the ability to slightly transcend a reality that you don’t want to accept,” LaVelle explains. Specifically for the band, she says, that means “a reality without Ash.”

The sudden and unexpected death of fellow musician and visual artist Ash Rickli in late 2017 sent shockwaves through Athens’ creative community. Rickli, 30, suffered a cardiac emergency one evening last November at Hi-Lo Lounge, leaving behind a partner pregnant with twins.

While his death was tragic, by most accounts Rickli’s spirit was lively, the sort that would urge his peers to continue pursuing the same dreams and joys he did during his life. LaVelle echoes that sentiment. “I am not saying that, like, my guitar is a weapon of denial, but that I can feel closer to Ash when I am playing music,” she explains. “Because art and music were such huge touchstones for Ash, it seems natural to manifest him in relation to these things.”

Shade’s release show Saturday at the 40 Watt will serve primarily as a tribute to Rickli. In addition to performances from musicians in the late artist’s circle, like The Hernies, Cult of Riggonia and Hannie and the Slobs, Rickli’s art will be featured and on sale, with all proceeds going to directly support his family.

After years of building intensity, awakened by a shift in cosmic energy, Why Spread Panic is ready to be loosed upon the world. The catalytic circumstances for its release, while difficult for the band to bear, support the notion that the time is right to finally let this record above ground to see the light of day.

“That’s the thing, that Ash is so important to so many people, everyone’s essence of him being as important as everyone else’s, all informing the ways that we behold him,” LaVelle says. “It is important to have an outlet for people to come together in support of all this—to celebrate art as a contribution to Ash’s family and memory. That is what this show is. That is what this little geode of an album was for.”