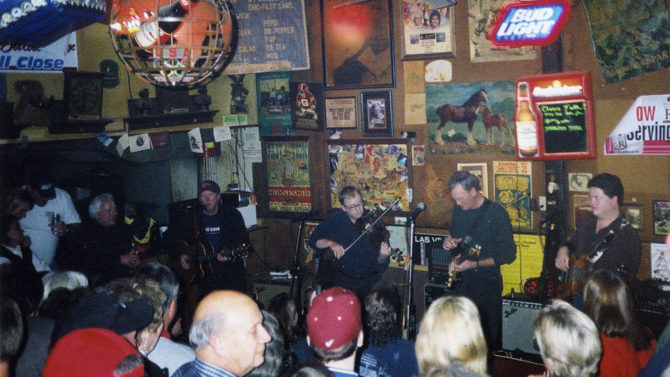 The kickoff to Athens’ holiday season comes with the Normaltown Flyers’ Thanksgiving Eve show at The Foundry Wednesday, Nov. 22, continuing a tradition that began in 1979, the year the Flyers were formed. The manager of Allen’s Hamburgers at the time, Danny Self—later to gain fame as Mr. Microphone—knew a good thing when he saw it, and recruited the Flyers to play in his world-famous restaurant every Wednesday night.

The Flyers’ shows were an immediate hit. Crowds spilled out onto the sidewalk, a mix of students and locals, Greeks and townies, white collar, blue collar and no collar, all gathering each Wednesday for the Flyers’ good-time mix of originals and covers guaranteed to make feet move and elbows bend.

That first Thanksgiving Eve came, and a phenomenon that nobody had anticipated occurred. The Wednesday-night regulars were joined by people who had moved away from Athens but had returned for the holiday. From then on, the annual Flyers show became a reunion and celebration of all things Athens: good music, cold beer, an instant tradition.

The Flyers, like the Classic City, have undergone a lot of changes over the past 38 years, but there has been one constant: The leader of the band has always been Brian Burke. “Brian’s always been a good pilot,” guitarist Davis Causey says. “He knows every song ever written, and he’s not afraid to try different things.”

Causey has played with Burke since they formed the band Mad Dog Melton and the Laughing Disaster in 1971, with a lineup that also included Terry Melton, Randall Bramblett, Arch Pearson, Cleon Nally, Ed Dye and Moi Harris. “I’ll always be grateful to Terry for taking me under his wing and introducing me to all the great musicians in Athens,” Burke says.

In 1969, there was one downtown music club, The Last Resort. It was owned by Melton and offered draft PBR, peanuts and a small stage, which mostly featured folk musicians. Jimmy Uhler worked for Melton, and upon returning to his Reed Hall dorm room one night, “Fat Jimmy” heard the strains of an acoustic guitar coming from a nearby room. He knocked on the door, and Burke answered.

Uhler took Burke down to the Resort, and after a couple of months, he and others coaxed Burke onto the stage, where he played a set of Rolling Stones songs. Melton liked what he heard, and a couple of years later, when the Laughing Disaster was formed, he brought Burke on board to play rhythm guitar.

Burke proved himself a capable vocalist and guitarist. Over the next six years, he navigated the Normaltown scene with Dixie Grease, the Riverbottom Band and the Austin Church Band before forming the Flyers in 1979. Over the years, Burke and the Flyers have been joined by a vast list of musicians, including Greg Veale, Causey, David Blackmon, Cal Hale, Tom Ryan, Andy Carlson, Deane Quinter and Tim White. (All of these guys are expected at The Foundry Thanksgiving Eve.)

Over the years, a lot of other frequent Flyers have earned their wings, including Bramblett, Carl Vipperman and John Keane, who will also contribute to this year’s show.

“Now that Mad Dog Melton is gone, I think of Brian as the elder statesman of the Normaltown river of music,” Keane says. “Brian was one of the intrepid few willing to give me a shot at recording a full LP in my fledgling eight-track home studio in the early ’80s,” he adds. “Those recordings resulted in the Barnstormin’ album, which we released on Mad Dog Records. It was one of my favorites. I always consider it an honor to get up on stage and [play] with Brian.”

Get two Flyers fans together over a beer, and you have memories. Add a third, and you have a party. Remember the Stolen Bones show at the Georgia Theatre? The Jay Smith benefit at the Rockfish? The Normaltown reunion shows at the 40 Watt Club? The Speakeasy? The Uptown Lounge? Tyrone’s? The 1,000 shows at Allen’s, including the one that closed it down on Dec. 31, 2003?