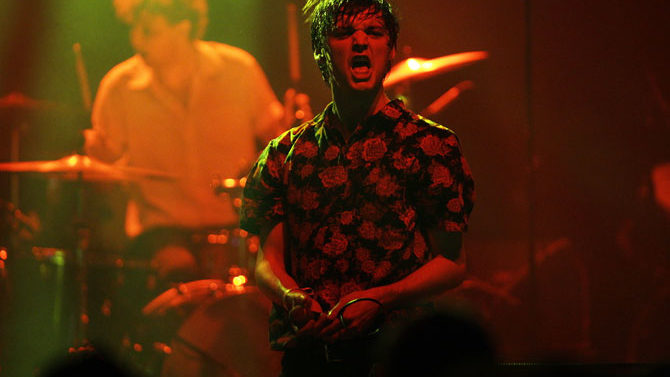 My first experience with Muuy Biien occurred at the 40 Watt Club on Valentine’s Day 2013. Here was a young and talented group of men who were actually pushing the rock envelope in Athens, when it had seemed, in my eyes, that rock was all but dead. Their influences were in all the right places: Warsaw (pre-Joy Division), Killing Joke, the Stooges, New York Dolls. They even performed covers of songs by The Fall and Swell Maps. The members all seemed to have personality—they had the fashionable look, the attitude, the cool boots and so on.

But now, Muuy Biien may be over. Frontman Josh Evans is moving to Los Angeles soon after the group’s AthFest performance, and he and guitarist Robbie Rapp say the band’s future is murky. Flagpole caught up with Evans and Rapp on a recent sunny afternoon.

Flagpole: If your career had to be divided into phases, are there any you are happier with than others?

Josh Evans: There are certainly phases, for sure. There is obviously the Xander [Witt] phase, then there was the Toby [Black] phase.

Robbie Rapp: I think that the phase that we’re currently in has been the most productive and enjoyable. And I don’t mean to say that this current one is any better to spite [the former members], it’s just that we have been the most collaborative and hard-working… And it was confusing a couple of years ago, because the way we were recording—there were no defined rules.

JE: It was an open-door policy, especially with [2014 album] D.Y.I. There were a lot of outside influences. There is a lot of material that we haven’t put out yet. It will be nice to take this break and start producing music without having to worry about anything. It’s kind of like taking ourselves out of the machine, or the cycle. We all have other projects. We just wanna put this thing aside for a while. The music will continue to come out. [2016 album] Age of Uncertainty was the best one for me, in terms of exactly how I wanted it to sound.

RR: Now that we know that this very well might be our last record for a while, there’s nothing to lose… [The band is] loose; it’s not defined by any one person.

FP: What do you need to see, feel, hear, or understand in order for you to be satisfied with what you are doing?

RR: It’s hard to define. I feel that we know we are onto something good if we look at each other and start laughing and smiling.

JE: There are definitely some magical aspects to it.

RR: We are all creative people, and we all have our other projects, like Josh said.

JE: I will do the same thing when I paint. I’ll do 100 of them—and like two of them happen where I actually get weirded out by how they came about. How this accident turned into this thing that I couldn’t even conceive to begin with.

FP: So you think the songwriting process is similar?

JE: I can talk all day about music, but I don’t really know how to make the perfect song. I can hear things in my head and make them happen.

FP: Do you ever feel like you become possessed onstage?

JE: Someone called me a demon in Chicago the other day.

RR: It can get that way. It depends. Sometimes circumstances won’t allow you to be that comfortable… Due to technical limitations, it can get very uncomfortable. We had a show in Cincinnati a couple of days ago where the microphone kept cutting out.

JE: That was one of the worst problems I’ve ever had in a long time, in that moment, because I was singing, and there was not a whole lot you can do about it. I wasn’t happy. My hand was bleeding.

RR: We started as a hardcore band, and that was an extremely limiting platform to make music. It would be silly to try and always be vital and cutting-edge. We’ve never had that attitude either. If it doesn’t sound good, and we don’t feel comfortable doing it, than don’t do it.

JE: It could very well be the end of Muuy Biien in Athens, GA. We have an album that we are working on.

RR: If you come out and see us on June 24… it might be the last show you see of us for a very long time. Maybe the very last show in Athens ever, but we don’t wanna say anything definite or concrete.