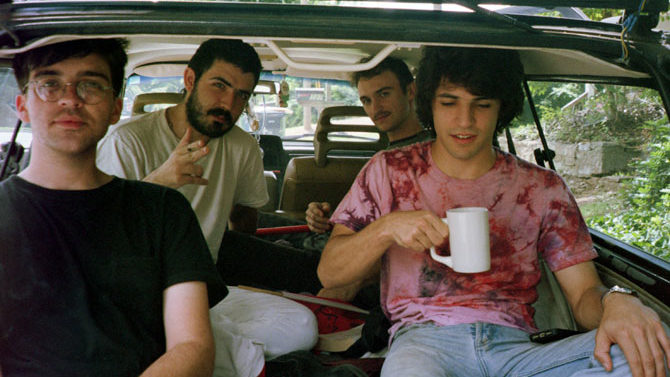 This Friday, Apr. 28, two local bands, The Hernies and Nihilist Cheerleader, will co-headline a show at the 40 Watt. While at first glance these groups couldn’t be more different from one another, they have one thing in common: Each will release a highly anticipated debut album this spring, with Friday’s concert serving as a kickoff for both records.

Before these bands enter the next phase of their careers, they spoke with Flagpole about what it took to get to this point, and where they hope to go next.

Starting out as the solo project of Henry Barbe, rock act The Hernies will release their debut album as a four-piece, If You Can’t Think, Then You Cannot Be Afraid of the Consequences of Your Actions, on Orange Twin Records Apr. 28.

Visitors to The Hernies’ Facebook page will notice a Saving Private Ryan-sized graveyard of names in the “previous members” section. Barbe has always been the primary creative force behind the project, but one might wonder why this particular group of guys was the one that stuck.

According to bassist Evan Amburn, the current lineup represents what The Hernies was always supposed to be, and the new album captures the earliest moments of the band becoming a cohesive unit.

“I think this album really captures what we sounded like in our infancy,” says Amburn. “A lot of these songs have changed, in a live context, from when we recorded them [in November 2015], but I’m still a fan of this album as a sort of picture of us as a young, freshly formed band. We sat on it for a while, but because of that it sounds like a proper introduction to The Hernies as a group instead of a solo act.”

Drummer and longtime band member Glenn Reece explains that “it all just settled in eventually. It was hard to maintain a steady lineup, really, until Evan joined the band.” Shortly after Amburn joined, Winston Barbe, Henry’s brother, returned home from an extended stay on the West Coast and formed the final piece of the puzzle.

“I had always talked to Henry about playing, but I was always busy with other bands or living elsewhere,” says Winston. “When I came back from California, I was able to make playing with him a top priority for the first time. It’s awesome to be playing with him.”

According to Henry, once the band found its chemistry, it wasn’t long until the group decided it needed to record an album. “We needed something to give to people,” he says. “Everybody wants something you can hold. You can play as many shows as you want to, and we’ve played a good bit, but that’s fleeting. We needed an album.”

Listening to Consequences, it’s clear that a wide variety of bands and genres influence The Hernies. Television and the Minutemen are brought up frequently as the group discusses its favorite tracks. “This album is like listening to rock and roll while driving down a mountain with no brakes,” says Henry. “There’s a lot of stylistic shifts, and the album goes in a lot different directions. It keeps you on your toes.”

Amburn, in particular, is happy with how the album turned out in the context of The Hernies’ previous release as Henry Barbe’s solo project. “The album is slick, but it still sounds like a group playing,” he says. “It doesn’t sound like one guy doing a billion overdubs and pressing play—it sounds like four different people playing music together as a unit.”

Adds Reece, “This project is not out of place from the first, self-titled album when you put them side by side. It’s different, for sure, but that spirit is still there. Now we just have an opportunity to get that sound into more people’s hands.”

Reflecting on the new album’s context in the wider history of Athens music, as well as walking in the footsteps of his father David Barbe’s well-known tenure in bands like Mercyland and Sugar, Henry is humble.

“I don’t really consider that kind of stuff,” he says. “It’s great playing music with my brother, and I like to play music with my dad. I’m not really sure I fit into any kind of legacy. Everybody’s family has their ‘thing,’ and I’m just a part of my family’s business. That’s all it is.” 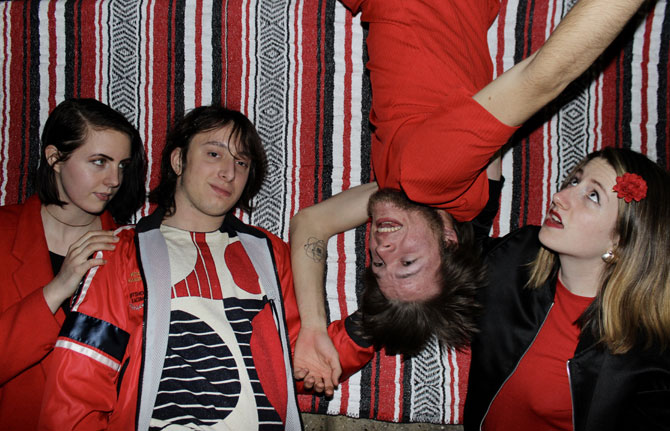 The Kids Are (Still) Alright

Punk foursome Nihilist Cheerleader’s first show was at AthFest 2014—on the festival’s KidsFest stage. Usually reserved for high-school bands who specialize in Weezer and Led Zeppelin covers, it’s surprising that a band that’s come to be known for its strong social message and hardcore antics got its start next to a bounce house.

But everyone has to start somewhere, and Nihilist Cheerleader took the stage—under its original name, Bent—and performed “Bleach Boy,” a song that highlights the unjust actions of white, male authority figures. While she’s not sure the audience understood what was going on, bassist Leora Hinkle fondly remembers a group of small children asking for her autograph after the show. “It was kind of embarrassing, but hey, the little kids loved us,” she says.

Nihilist Cheerleader started when singer and guitarist Flynne Collins and her friend Lewis Gutierrez got together as teenagers to make “shitty music.” “It was really bad,” says Collins. “But I loved it anyway. It was great having our own little shitty thing to hold onto.” Not long after that, they asked Hinkle to join the group. Guitarist Dylan Loftin rounded out the lineup.

“I was very opposed at first,” says Hinkle. “There was nothing recorded yet—it was the very early stages [of] the band. I was nervous to join because I hadn’t played bass in about a year, because I was recovering from cancer. I hadn’t done any music stuff at all, really. Then I gave it a shot, and it worked out. We recorded our first EP in Lewis’ bedroom.”

That EP, Parkour, was fun, if rough around the edges. While it was received well by early fans of the band, Hinkle and Collins don’t look upon it too fondly. “It’s very poorly recorded,” says Collins. “It’s intentionally a lo-fi record, but we weren’t very confident at the time. We were very much amateur musicians at that stage.”

The band’s follow-up, 2016’s Truth or Dare EP, brought Nihilist Cheerleader a lot of the hype it has enjoyed over the past year, but the group didn’t exactly expect that response.

“We recorded that EP in about four hours,” says Collins. “It was the first time we were paying to record, and we were all really broke, so we wanted to record it as fast as possible. We went into the studio to make something that was really personal. We never made it expecting anyone else to like it but us.”

While the EP was released quietly in January 2016, over the course of the year it started attracting listeners. “The more people listened to it, we started to get some significant attention,” says Hinkle. “I think when we won the Flagpole [Athens] Music Award [for Upstart of the Year] is when people really started paying attention to us. People liking that EP was kind of a happy coincidence.”

After Truth or Dare, the band went through some changes. Gutierrez left, making way for Charlie Gumby to join on drums. “We’ve grown a lot as musicians together since then,” says Hinkle. “We’ve kept that lo-fi sound, but we’ve developed our songwriting and instrumentals to a whole different level.”

Now Nihilist Cheerleader is prepping its debut full-length album, Riot, Right?, set for release in the coming months. According to Collins, the process of making the record has been both more strenuous and rewarding than the fast-and-loose approach of previous projects.

“We’re putting a lot more into the songwriting for this album, so it’s taking a lot longer than it used to,” she says. “The songs are a lot more complex. We’re putting more thought into not having every song sound the same. We’re a lot more perfectionist this time around, so we’re taking way longer to make sure songs are to our liking.”

Hinkle elaborates on the album’s sound. “There’s a lot more emotion on this album. Not just in the instrumentals, which are more intricate and thought out, but also in the vocals. Flynne is touching on a place where she hasn’t been before, sonically.”

Hinkle and Collins describe the album’s sound as a mix of pop-minded dance-punk with the occasional foray into the heavier sound of Nihilist Cheerleader’s previous material. The album is politically minded, with songs that tackle tough subjects like the death penalty, and an updated version of “Bleach Boy” that more accurately reflects the dangerous type of power we’ve seen take hold in the Trump era.

One of the more difficult parts of the recording process, according to Hinkle, was capturing the band’s essence. “There are a lot of musicians who are incredible live, and it’s hard to capture their energy in recordings,” she says. “That’s exactly what we’re trying to [do]… I don’t think it will ever be the same—you have to see us live to fully understand us as a band—but we’re gonna try.”

The group is known for its intense performances, and Collins and Hinkle promise things will only get crazier once they begin touring around Riot, Right? this summer. “We used to be really stiff on stage. Now we get a little wild,” says Collins. “I like performance art, and I like to conceptualize different stunts to do on stage. Lots of stuff, like drawing on each other with lipstick and spanking our guitar player. I plan to up the ante as much as possible as things move forward.”

Collins and Hinkle say they cherish the time they’ve had together as a band, and are excited for where Nihilist Cheerleader will go once Riot, Right? is in people’s hands.

“I wouldn’t be involved in music at all right now if it weren’t for this band,” says Hinkle. “Flynne pushing [me] to pick music back up at a point in my life that was very uncertain—it made a huge difference.”

For Collins, the band has given her a necessary boost in determination and heart. “I don’t think I’ve ever felt more confident in myself or what I’ve been doing,” she says. “I’ve been honored to get so much support from people on this. Nihilist Cheerleader is definitely the most fulfilling thing I’ve ever done.”

[This article has been edited to reflect the fact that guitarist Dylan Loftin is an original member of Nihilist Cheerleader, and that drummer Charlie Gumby did not play on either of the band’s EPs.]