Canadian Punks Pup on the Highs and Lows of Constant Touring 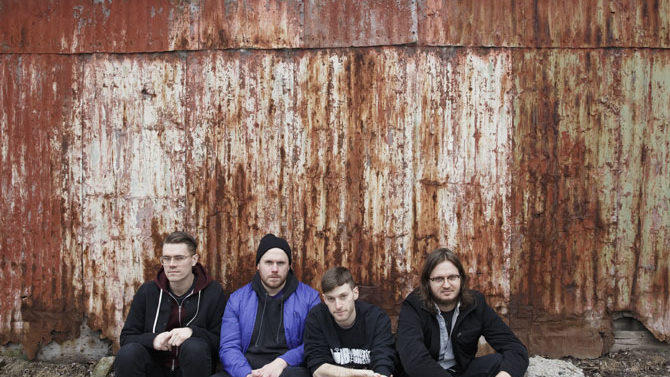 “If this tour doesn’t kill you, then I will/ I hate your guts, and it makes me ill/ Seeing your face every morning.” This is the first line on Toronto punk band Pup’s sophomore album, The Dream Is Over. Recorded during a short reprieve from the band’s nearly constant touring schedule, Dream is an album built on the inherent frustration that comes with entering one’s late 20s while eking out a living as a touring musician.

According to guitarist and backing vocalist Steve Sladkowski, while the song is purposefully over-the-top, the sentiment comes from a real place.

“It’s obviously mostly tongue-in-cheek,” he says, “That’s not to say there aren’t days of tension. But it’s never anything that lasts—it’s always a fleeting frustration. Weird shit like not getting coffee early enough or not having enough salad. The four of us know how to push each other’s buttons like siblings, but we also know when to give each other space… We don’t tour with a large crew, there’s only the five of us. So you can’t work in a situation where people are stewing all day mad at each other—it’s too small of an operation to deal with that.”

It also helps that, after nearly three straight years of touring, Pup’s members have learned how to maintain their busy schedule without losing their minds.

“We try to treat ourselves a little bit better than we used to while on tour,” says Sladkowski. “What I tell people is that our lives are a ‘perpetual Thursday.’ So on Thursdays, you can go out and party if you want, and there’s not much of a consequence. But you can also go home [and] watch Netflix or a baseball game, and that’s also acceptable. When you tour for this long, you can’t get hammered every night, or your body will break down. That’s just been a learning process.”

Despite that sentiment, the video for “If This Tour Doesn’t Kill You” features all of Pup’s members trying to murder each other in increasingly violent ways. It’s another impressively well-done and high-concept clip in a string of videos that have brought Pup increased attention and over 2 million YouTube views in the last three years. Popular videos include “DVP,” which features the band’s lyrics inserted into classic video-game footage, and “Guilt Trip,” which features a pre-pubescent version of the band building a clubhouse and murdering a police officer.

According to Sladkowski, their music video success doesn’t have much to do with the band itself.

“We’ve been lucky in that a lot of the heavy lifting on those is not really done by us,” he says. “We worked with two amazing directors over the years who just happen to be friends of ours, Chandler Levack and Jeremy Schaulin-Rioux. They have come up with a lot of those concepts, then we come in and generally help fill things out from there.”

Pup doesn’t have much planned other than, yes, touring and “eventually” recording something next year, says Sladkowski, but the band is extremely excited for its upcoming show in Athens due to the unusually stacked lineup.

“We’re playing with Jeff Rosenstock and Hard Girls, who we’ve both toured with before, as well as Kate Ellen, who used to be the lead singer of Chumped,” Sladkowski says. “So we were able to kind of combine all of these people’s tours into one show for a night, and it’s gonna be this big blowout of friends. It’s one of the shows we’re looking forward to the most on this tour.”