The Church Looks Back and Moves Forward 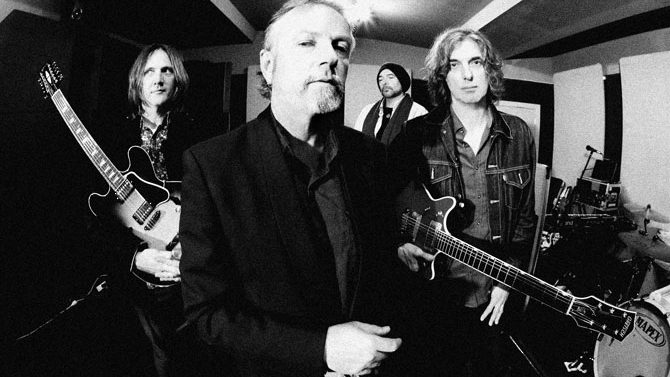 Australian four-piece The Church has been called many things in its 35-year existence: psychedelic, post-punk, new wave, dream-pop. But despite a 20-plus album catalog and induction into the Australian Recording Industry Association’s Hall of Fame, the tag that’s undeservedly stuck with the band through it all may be “cult.”

From Sydney, bassist, singer and founding member Steve Kilbey gives the impression that neither success nor misfortune could phase him now. “I am OK. Things will be good for tour, with a little extra rehearsal in Texas before [the] first show,” he says, referencing the band’s upcoming 17 dates throughout the eastern United States, which begin in Dallas on Apr. 8. The group is slated to perform two separate sets each night: a complete run-through of their sophomore album, The Blurred Crusade, and a second of standouts spanning their lengthy discography, including cuts from their latest release, 2014’s Further/Deeper.

Characterized by its mystical imagery and expanded sonic palette, The Blurred Crusade is one of the band’s finest records. From the opening one-two punch of singles “Almost With You” and “When You Were Mine” to the stellar, lovelorn “To Be In Your Eyes,” the band’s sophomore album hardly misses a beat. However, there’s an underlying irony to Kilbey and company’s decision to play the album in its entirety for American audiences, as the album was denied a proper U.S. release by Capitol, the band’s record label at the time, who claimed it wasn’t radio-friendly enough.

The Church would continue to have an interesting relationship with the States over the years, and particularly with Los Angeles, where they recorded several albums, but the band eventually broke through to mainstream audiences with the release of 1988’s Starfish, which was certified Gold in 1992 by the Recording Industry Association of America. The band’s most recognizable single, “Under the Milky Way,” even broke the top 25 on the U.S. Hot 100 chart, and was years later featured in Donnie Darko, leading newer audiences to dig up the band’s past.

When plainly asked why play The Blurred Crusade out of the myriad other possibilities, Kilbey responds glibly. “Well, we did Blurred Crusade in only a few places, so [we’re] coming back to some places we didn’t do last time,” he says, referring to the band’s co-headlining North American tour last year with The Psychedelic Furs. “We’re gonna start doing all our albums in their entirety again eventually, I imagine, and we had this one ready from an Australian tour last year. So we can tick them off one by one as we do them, I guess.”

With the abstract plan to work their way through other standouts from their back catalog, Kilbey is sure new material is in store, as well. It helps that the songwriting process now has a renewed energy. After another founding member of The Church parted ways with the band—Marty Willson-Piper, in 2013—guitarist Ian Haug of Australian rock band Powderfinger joined to help write and record Further/Deeper.

“Ian is an amazing player and a very relaxed guy with his own mojo and trip,” Kilbey says of the guitarist, who shares co-writing credits on the record. “He worked out surprisingly well.”

Haug’s recruitment does seem to rejuvenate the band on record, and his playing style pairs seamlessly with the other members. Further/Deeper cuts “Delirious” and “Lightning White” are full of signature Church guitar haze, while the group puts its own ’60s psychedelic spin on “Laurel Canyon.”

Whether or not The Church was or will ever be ever a household name is a moot point, especially given the fact that Kilbey has rarely given in to the desires of the industry, preferring to make the music he wants. Uncompromising and nowhere near ready to stop, the frontman has a simple reply for what comes next after April’s tour: “Well I guess it’ll be time for another tour or album, then.”