To SXSW and Beyond: Tracing Mothers’ Meteoric Rise 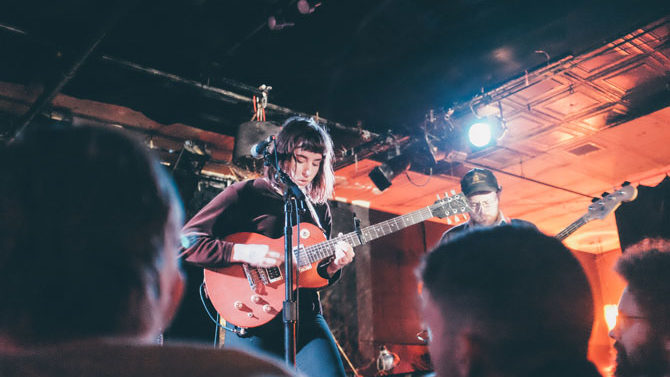 “In my head it feels like I’m getting shipped off to war,” says Patrick Morales, the bassist and newest member of the much-hyped Athens rock band Mothers. It’s just a few days before the band leaves for a more than five-month tour that will take them across the country, to Austin for South By Southwest and to the United Kingdom for the first time.

All four members sit in the living room of Mothers’ lead guitarist, singer and songwriter, Kristine Leschper. Leschper is tired after wrapping up a long morning of phone interviews, but it doesn’t stop her from expressing audible excitement when talking about how her passionate solo project has transformed into one of the most talked-about bands to come out of Athens in years.

“I’m putting out a record—how cool is that?” says Leschper, a huge smile painted across her face.

Getting to this point has been a long journey for Leschper, who started Mothers as a solo act in 2013, performing frequently at local venues while studying printmaking at the Lamar Dodd School of Art. Leschper quickly gained a reputation for her deeply personal lyrics and her breathtakingly emotive vocal style. In a town where at least five stripped-down singer-songwriters perform every night, few are ever as captivating as Leschper.

Leschper’s strong solo presence meant there was some doubt in the music community whether Mothers would work as a full-fledged band. For Leschper, there was never any other option.

“I had always envisioned Mothers as a full band,” she says. “I just kind of made do with what I had when I first moved here. I hadn’t really met the right people yet, so I just played as a solo artist because I didn’t have to rely on anyone else. I was also pretty scared of playing with other people, because it can be a scary thing to jam with other people for the first time. Over time I kind of organically started meeting the people who are here now in Mothers.”

The first additions were drummer Matt Anderegg and guitarist Drew Kirby, who had established themselves in the Athens scene through their band New Wives. They crossed paths and collaborated at different points over the course of a few years, as all Athens bands do, but the decision to form a new project together was sudden, if not unexpected.

“It all went by super fast at first,” says Kirby. “It was near Thanksgiving of 2014. Matt and I were hanging out, and we got a text from Kristine on a Wednesday night asking if we wanted to play Cloud Recordings Fest with her that upcoming Friday. It was really short notice, but we looked at each other and were just like, ‘Yeah, we’ve gotta do this.’”

Just two weeks after that first show, Kirby, Anderegg and Leschper booked time at Chase Park Transduction and started recording material for their debut album, When You Walk a Long Distance You Are Tired.

Explaining why she felt the album needed to be recorded so quickly, Leschper says, “It was important for me to make that record when we did for my mental health. I was struggling a lot personally, and those songs were all written when I was going to art school and trying to figure my shit out. I was trying to figure out what kind of person I was and what I wanted to put out into the world. It sort of feels like documentation of this time in my life.”

Leschper’s ambition for the album was grand. “The record is very personal, but also kind of universal, because it aims to talk about the human condition,” she says. “I think that’s one of the most important things to me. Just taking time to consider your mortality and your relationships with other people. I think it is, like, highly relatable in that way, because it’s something that as people we all experience.”

The initial 14 tracks for the album—the final release was pared down to eight—were recorded in just two weeks. Though their time in the studio was short, the members of Mothers all considered it to be a profound experience.

“It was a really, really intense process,” says Anderegg. “I think everyone was kind of freaking out the whole time. It was brutal. It was a very serious session for a very serious record. It’s not a lighthearted record at all. It’s the kind of record that requires prior commitment to some extent, in the sense that you have to be willing to dive in and take your time with it.”

Comprised mostly of Leschper’s previous solo material reworked and re-recorded live with a band, Tired’s push-and-pull between quieter moments and raucous guitar-and-drum breaks is a living document of Mothers’ slow and fruitful transition into a more collaborative project.

The band was rightfully confident in the record’s quality, which made it all the more difficult to decide to delay its release until they were signed to a label. Though the album had been completely finished since early 2015, according to Leschper, it was important that the band wait to release the record at the right time.

“This album is something very special and personal to us,” she says. “We sat on it for so long because we wanted something like this to have a proper, label-supported release.”

For 10 months or so, Mothers waited. Over the course of 2015, the band toured with of Montreal, added a fourth member (bassist Morales, of Athens band The Viking Progress) and further developed their sound as a four-piece. It was an exciting time for Mothers’ development, but according to Anderegg, there was mounting tension between the completed record and a new, more experimental sound Mothers was developing.

“We spent a long time worrying that it wasn’t worth waiting to put it out,” says Anderegg. “The whole time, that record was just sitting there. During that time, as a musical unit, we were moving way past the kind of music we were making on that record. We were moving forward.”

It was partly due to this tension that the band decided to release a standalone single. Released through a one-off agreement with New York label Grand Jury, “No Crying in Baseball” is the first Mothers song that was worked on by every member from its inception. “I consider it our opening statement as a band,” says Kirby. “It was a succinct way of saying, ‘Hey, this is how we are going to push ahead from here on out.’”

Off the strength of “No Crying in Baseball,” Mothers ended up forming a personal relationship with the staff at Grand Jury and inking a record deal with them in late October, following a run of shows at CMJ in New York City.

Once the deal was finalized and Tired was given a February 2016 release date, Mothers, for lack of a better phrase, started blowing the fuck up. Features from The Fader, Brooklyn Magazine, Stereogum and Paste started hyping the band as “the next big thing,” and shout-outs from NPR and Spotify pushed the streams of their singles to well over 1 million plays—all before the release of their first album.

The band’s reactions to all this positive press range from grateful to confused. “I started out as a fan first, before I joined the band, so I’m like, ‘Of course they’re saying all of this stuff; we’re great,’ but I’m not sure everyone else feels that way,” says Morales.

While Kirby is happy for the spotlight it shines on Mothers’ music, he says it mostly feels strange. “It all feels really superfluous to me,” he says. “It’s ultimately a good thing that people want to talk about us in such a nice way, but it doesn’t flatter me. It just makes me kind of uncomfortable.”

Leschper clarifies, “I think we just feel weird about it since a lot of the press is centered around a record that we finished more than a year ago. It just feels odd to talk about it now. But I guess that’s kind of our fault for sitting on it for so long.”

While Mothers have been touring in bits and pieces and perfecting their incredibly tight live set for more than a year, their upcoming tour in promotion of Tired will mark the longest they have ever been away from home. Though it’s currently scheduled to take them into June, there is a strong feeling that they will be on the road for much longer.

“It kind of feels like a forever tour,” says Leschper. “The amount of bookings keeps growing and growing with no end in sight, and I’m not really sure when we’ll be back. I’m a little worried that soon we’ll realize the whole year is gone. I’m stoked, though.”

“It’s really intimidating,” says Anderegg. “But I feel like we’ve been really lucky on all of our trips. Somehow they have always turned out better than expected. Also, we aren’t pushing super hard to get anyone to sign us on this tour, so it won’t be as grueling in that sense.”

If there’s one concern the entire band seems to share about this tour, besides being away from their friends and family for so long, it’s that they won’t be able to work as much on their new material.

“We have been working so hard on our newer stuff, and it’s really starting to come together,” says Leschper. “So I worry about not having enough time to flesh that stuff out, because we want to put something else out relatively quickly after the record comes out, so that we can catch people up on the other stuff that we’ve been doing.

“But I do think that this tour is going to be a really important segue between this record and our next record, because we’re going to be playing a combination of the older, softer songs and some of the newer, more post-punk influenced, heavier stuff. I think it’s going to be a nice opportunity for people to see both sides of it.”

As all four members sit around Leschper’s coffee table, laughing and sipping tea, there is a sense that there won’t be many more of these relaxed moments for the band anytime soon. Tired is one of the most consistent and exciting records to emerge from the Athens music scene in at least a decade. It’s as emotional, beautiful and human as the band itself. On a local level, some already view Mothers as hometown heroes, and praise from national publications is just beginning.

To put it simply, there’s no way an album and tour like this won’t have a lasting effect on the careers and lives of the people who made it. Whether or not everyone in Mothers realizes this fact, they all seem more than ready for whatever comes next.

“We’re just going to keep creating as much as possible and put out as much of it as we can,” says Leschper. “Just keep exploring new territories. We may sound different, but we’ll still have the same essence. It doesn’t matter what it sounds like, as long as it all ties back into what I think Mothers represents. To us, this is much more than just a band.”

Flagpole follows Mothers to SXSW Mar. 15–20! Bookmark Homedrone to stay up to date with all our festival coverage. For a list of Mothers’ upcoming tour dates, including SXSW appearances, visit nestingbehavior.com.