Basement is Back, But Emo’s Always Been There 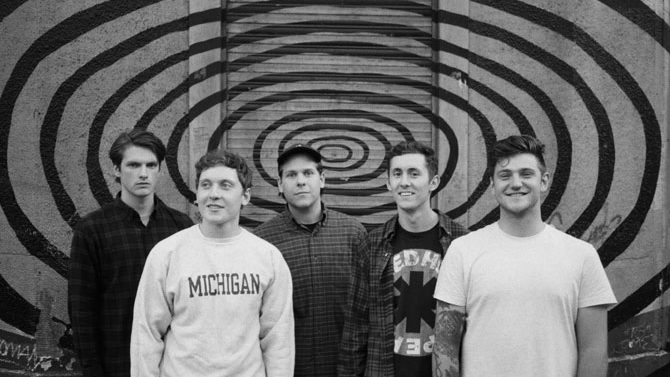 The music media has run the emo revival into the ground. Think piece after think piece has chronicled the genre’s return to prominence, heralding a new wave of artists as saviors of the maligned, guylined branch of punk that spawned My Chemical Romance and Fall Out Boy just a decade ago. With progenitors American Football returning to the touring circuit after the re-release of their only album, and bands like Title Fight, The World is a Beautiful Place & I am No Longer Afraid to Die and Waxahatchee releasing standout albums this year—and dismantling emo stereotypes in the process—the genre has resurfaced as a force to be reckoned with.

But did emo ever really disappear? “It’s a buzzword. People just want traffic to their sites,” says Alex Henery, guitarist for English post-hardcore band Basement, which recently experienced a rebirth of its own.

Formed in the English town of Ipswich in 2008, Basement released two albums before going on indefinite hiatus in 2012 to allow members to pursue other professional lives. After hinting at a return on social media in early 2014, the band surprise-released a three-song EP, Further Sky, last summer via New England label Run For Cover Records—home to a slew of new emo bands, including Modern Baseball, Tigers Jaw and Pity Sex, among others.

Now in the midst of a U.S. jaunt supporting Warped Tour mainstays The Story So Far and with a new full-length album in the works, Henery sees Basement’s return as an opportunity to share the stage with friends and have some fun. “It felt amazing to be playing shows again, and that people were still interested in seeing us,” he says from the road.

What Henery doesn’t mention is that during the group’s U.S. tour last summer—its first in two years—Basement sold out nearly every venue it played, including two shows with Brand New, another high-profile band that also recently came out of hibernation.

Along with the appropriate timing, Henery cites personal and professional satisfaction as the impetus for creating new music. “We all had reached a great point of feeling comfortable with our careers,” he says. “There was never a point where we felt it was right to do it; we just did what we wanted naturally.”

Basement’s members continued writing music during their time off from the band, convening over Christmas 2013 for a few low-key jam sessions. Enough of a spark still existed to begin working on new material, which they continued to develop from afar, sharing ideas through email. Henery flew back to England for some writing sessions, and most of the songs were then fleshed out and completed in the studio.

“Promise Everything,” the first single released from Basement’s forthcoming album of the same name, finds the group balancing aggressive guitars with poignant melodies; singer Andrew Fisher’s vocals carry the song confidently through catchy choruses and a yowling coda. Henery says the emphasis this time was on maintaining punk bravado while crafting standout melodies, as evidenced by the band’s 2014 EP, which included two new songs and a cover of Britpop band Suede’s “Animal Nitrate.” The fusion of styles, more successful in song than on paper, positions Basement to take punk, pop and, yes, emo into more exciting territories in 2016.

Emo has traveled a long, hard road in recovering its tainted name, past the commodification of Hot Topic and through countless after-school “TRL” countdowns. But with the proliferation of like-minded artists making big musical statements today, the genre has returned to its honest roots. Perhaps most importantly, those responsible for salvaging it seem to pay the label no mind.

“I don’t think there is a revival, I just think [the] press realized there are a lot of people writing great music, and a lot more people who care about hearing it,” says Henery.