On Beat the Champ, The Mountain Goats’ Three-Piece Unit Hits its Stride 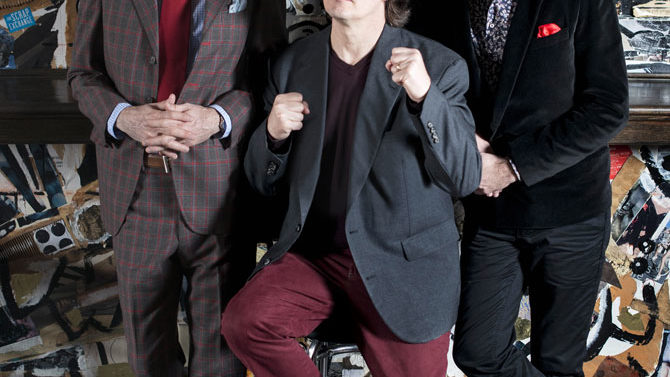 It’s been a busy year for The Mountain Goats. The April release of Beat the Champ, the band’s latest record, came just months after bandleader John Darnielle published his debut novel, Wolf in White Van. And Darnielle isn’t the only member with a side gig: March saw the release of The Best of The Best Show, a 16-CD compilation of drummer Jon Wurster’s contributions to Tom Scharpling’s acclaimed cult radio show on New Jersey’s WFMU.

From 2000–2013, Wurster regularly called in to “The Best Show on WFMU,” posing as different characters from the fictional town of Newbridge, NJ—all while touring with acts like The Mountain Goats, Superchunk or Bob Mould.

“I’d be doing [the calls] from an alley behind a club,” Wurster explains, or “just off the stage as we were about to go on—anywhere I could fit a call in where it wouldn’t be too loud.” Wurster modestly sums up his role on “The Best Show” as “a lot of hiding behind Dumpsters, making calls.”

Now, The Mountain Goats are heading out on a tour of the South, the band’s third string of dates in support of Beat the Champ. The record deals with themes like the strain of touring and missing family, getting older and experiencing one’s body breaking down. It also happens to be a concept album about professional wrestling.

The connection might not seem obvious. Wurster admits to being skeptical about the project at first. “John was very excited about this concept,” he says, “and I was a little unsure of how it was going to hang together.”

The band rehearsed the new songs in a theater on Duke University’s campus. “That helped a lot,” Wurster says. “It made the songs and the performances sound record-ready, so I think going into the studio we had that confidence going.”

It wasn’t long before Wurster began to realize what Darnielle was up to. “‘OK, this is a universal theme he’s going after,’” Wurster remembers thinking. “I realized, ‘Oh yeah, people are going to be able to relate to this, even if they don’t know a thing about wrestling.’”

Indeed, Darnielle portrays the world of costumes and cage matches in such vivid detail that even the uninitiated can envision it. The listener’s initial amusement at the novelty of the concept—the shock and joy and discomfort of hearing the sweet, reedy-voiced Darnielle sing lines like “I personally will stab you in the eye with a foreign object”—quickly gives way to genuine sympathy for the record’s characters.

While Darnielle does play up wrestling’s comic aspects, Beat the Champ is a dark and remarkably violent record. For the wrestlers, and those in the audience who identify with them, the sport’s stylized violence is a way of compensating for their powerlessness outside of it. “One of these days my legs will both snap like twigs,” Darnielle sings on “Foreign Object.” “If you can’t beat ‘em, make ‘em bleed like pigs.”

This theme repeats on “The Ballad of Bull Ramos,” a song about an aging, small-time wrestler reliving his glory days as his health worsens. “Aren’t you that old wrestler with the bullwhip?” a doctor asks the title character as he prepares to operate. Ramos replies proudly, “Yes sir, that’s me/ I’m him.” By the next verse, he’s lost a kidney and gone blind.

It’s not just that the record’s themes are universal. As Wurster points out, this is also familiar ground for The Mountain Goats. “The Legend of Chavo Guerrero” recalls the conflict between stepdad and stepson on 2005’s The Sunset Tree: “He was my hero back when I was a kid,” Darnielle sings. “You let me down, but Chavo never once did.”

Wrestling’s allure for the narrator of “Chavo” is a mixture of exoticism, escapism and yearning. “The telecast’s in Spanish/ I can understand some/ And I need justice in my life/ Here it comes,” Darnielle sings, leading up to the chorus: “Look high, it’s my last hope/ Chavo Guerrero, coming off the top rope.” In wrestling, things work out in ways they don’t in real life.

Yet things are working out nicely for The Mountain Goats. Touring behind a concept record with an arcane theme might seem like an odd moment for a band to hit its stride, but Wurster speaks of a strong understanding between him, Darnielle and bassist Peter Hughes.

“We’ve been doing this as this unit, the three of us, since early 2007, so… we know how to play together,” says Wurster. “I definitely hear it the most in these last two records that we did,” he says, referring to Beat the Champ and 2013’s Transcendental Youth. “It sounds like a band that’s been playing a long time together.”