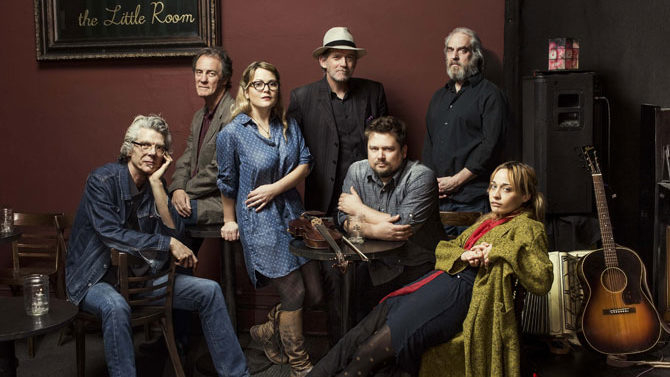 It is remarkable how much meaning can be attributed to the simple act of covering a song. The cover can serve as a means of establishing one’s musical identity or asserting one’s bona fides within a chosen genre; think, for example, of The Band’s cover of “Long Black Veil.” It can also, as in the case of John Cale’s brilliant reinterpretation of “Streets of Laredo,” be a way for an artist to highlight his or her unique sensibility by bringing it to bear on another’s material.

Extend the idea of the cover song and you get the cover band—at its worst, a much-maligned locus of mediocre hackery. “If there’s one thing I can’t stand/ It’s this bar and this cover band,” as Jason Isbell put it in “Codeine.”

But in the right hands, the concept can yield positive results. Harry Nilsson shined as a one-man Randy Newman cover band on Nilsson Sings Newman. Covers have served Yo La Tengo so well over the years that the band just put out a second album nearly full of them.

Watkins Family Hour, led by Sara and Sean Watkins of the bluegrass group Nickel Creek, takes a less fraught approach to the idea of cover song as musical institution. For the Watkinses, playing others’ music is a natural, casual act and a means of release from their hard-touring solo careers.

The two siblings were joined by fiddle player Gabe Witcher to form the core group, “and then we would have different people depending on who was in town,” says Watkins, “different bass players, different drummers.”

Eventually, the lineup grew to include an impressive roster of L.A. session musicians: Don Heffington on drums, Sebastian Steinberg on bass, Benmont Tench on keyboards and Greg Leisz on pedal steel and dobro. “It’s the kind of band that someone would put together to make their dream record,” says Watkins.

For years, the group had no plans for anything beyond the regular monthly set, but a friend’s offer of some studio time was too good to pass up. When the group went in to record what would become its self-titled debut, band members decided that covers would be the focus.

Aside from the practical concern of setting the new record apart from the siblings’ solo releases, Watkins explains, “[Covers are] a big part of the show,” adding, “I like having a theme with a record, and that seemed like a place to start.”

Choosing which songs to cover was a simple matter, says Watkins. “We picked the songs that we enjoyed playing the most, and that seemed fun to record at the time.”

This non-doctrinaire approach led to a compelling mix. “Feelin’ Good Again” and “Early Morning Rain” each capture a single moment frozen in time, while “The King of the 12 Oz. Bottles,” “She Thinks I Still Care” and “Where I Ought to Be” demonstrate the enduring power of the clever hook.

Speaking of how he approaches the material, Watkins cites the record’s Bob Dylan cover, “Going Going Gone,” as an example. It’s not a matter of imitation, Watkins explains. “He just kinda spits [the lyrics] out—you kind of have to take it and make it your own. You kind of stick the words and find your own little melody.”

Once the group had the record in the can, another serendipitous occurrence led to the idea of taking Watkins Family Hour out of L.A. and on the road. “We were talking with Fiona Apple,” Sean explains. “She was saying she wanted to get out and play and do some music—but not her own shows.” Again, the idea of doing covers was part of the allure.

Apple, who sings on the record as well, joins the group on its current tour. She and the other members of Watkins Family Hour seem wholly comfortable in their role as ambassadors of the cover song’s casual appeal. The monthly residency, Watkins explains, has been “a big part of our musical lives over the years.” Now, “it’s real fun to get to take it out to other people around the country.”